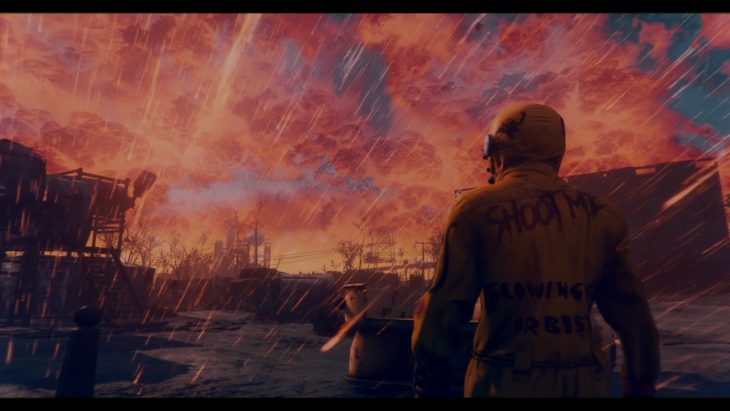 The dangerous lands of the Commonwealth are full of radiated ghouls, scorpions, hostile raiders and super mutants. One other aspect keeping players on their toes when traversing the wild lands of Fallout 4 are the dynamic weather and rad storms; so let’s look at a few weather mods to take things even further.

Taking the somewhat bland storms and weather out of the radiated wasteland, certain mods make for a much more immersive and exciting feel. The Vivid Weathers mod completely overhauls the weather system by adding dozens of new weather climates and visuals, different storms like radstorms and thunderstorms, snowfall and tons of other fogs and other visual enhancements. This mod even goes as far as to change various sunsets and nightfall visuals. You’re even given the option to tweak the volumes of the rainfall and thunderstorm effects to your content.

Sometimes the storms turn the player off and potentially inhibits the gameplay, but a little touch of rain never hurt anyone. For those not interested in a busy setting of storms and weather when scavenging through the Commonwealth, but still care for a little diversity in the mood, FO4 Rain adds exactly that. Deepening the visual on the rainfall, droplets and even the ripples in water, this mod enhances just enough for every Fallout 4 wastelander.

Like the Vivid Weathers mod, this PS4 mod which beautifully enhances the weather visuals and sounds, it also adds a huge touch of darkness for the night-time travelers. In the Weather Redux mod, plasma storms and dust storms have been added, as well as the enhanced thunder storms, rad storms and sunsets/rises. Once nightfall hits, this mod makes it mandatory to navigate around in the pitch black of night when traversing outside. Using the Pip-boy or Power Armor headlamp is highly advised in this totally immersive and unforgiving mod, not only giving better weather visuals, but an eerie existence after the sun goes down.

With the usual storms passing through the Commonwealth, aside from the radstorms, things can get pretty uninteresting quick. With the Nuclear Weather mod, rain becomes acidic, scorching hot firestorms, intense snow storms, melting heat waves and even a slim chance to step through a ripple in time. This mod is excellent for spicing things way up in the Fallout universe.

There are tons of mods (and weather mods) out there for the wasteland shooter, Fallout 4. These are only a few, but are definitely worth checking out for any player looking to up the weather game in their Commonwealth experience.