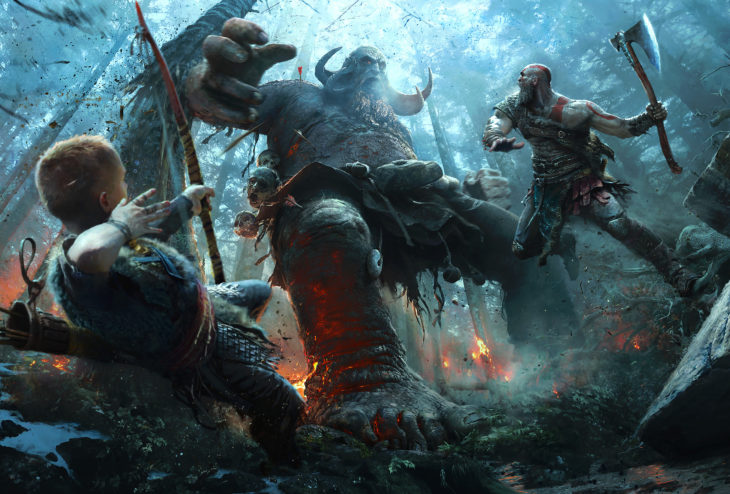 The year 2018 is already almost up with only 2 months worth of new releases to go. The first ten months have displayed some incredible titles from all genres of gaming, but the action category shined beautifully with hit after hit. From the iconic web-slinger to the reboot of the god-slaying anti-hero, it seems there was something for anyone looking for an action-packed new release.

Taking a mandatory co-op approach to gaming may not be the most approachable method of getting players to experience your work, but when it’s executed to the degree that Hazelight Studios executes it, it’s hard to put your controller(s) down. Working with a friend throughout the riveting narrative combines flawless teamwork with gripping action scenes and remarkable dialogue situations. The prison break-out adventure is purely satisfying and filled with plenty of cooperative challenges and fearless endeavors shared between two strangers forming a tight bond all the way up until the pivotal ending. A Way Out may be only geared towards players with an extra hand in experiencing the engaging action game, but the experience positively shows just where cooperative gaming could be headed in the future.

The Monster Hunter series has mostly attracted a core fan base that, either, caught on in the early years on the Playstation 2, or dedicated to the handheld entries. With Monster Hunter World, Capcom brought the beloved franchise over to major household consoles, and with it a slew of newcomers to the monster slaying action. With a gorgeous and vivid world made up of numerous maps to explore, excellent weapon and armor upgrading along with thrilling co-op, Monster Hunter World is a near-perfect welcome back to home consoles everywhere.

Rockstar has a knack for revolutionizing the gaming industry and, more specifically, the open world genre. Time and time again they’ve created breathtaking landscapes brimming with an awe-inspiring cast of characters and loads of exciting activities, but not like what they’ve created in their latest masterpiece – Red Dead Redemption II. The genre has been turned on its side from the veteran developers before, but the amount of detail found in every nook and cranny is breathtaking, the realistic survival mechanics borders on tedious, but still manages to be thoroughly enjoyable, and the captivating prequel plot line of the Van der Linde gang is something that should be experienced by any fan of the wild western era.

Red Dead Redemption II was easily the most anticipated release of, not only the year, but possibly the generation – and expertly delivered an incredibly rich experience not found in any other massive open world to date. Rockstar continues to push the envelope of what’s possible in the industry, and Red Dead Redemption II is a glistening example of what happens when developers take their time to create a lively world filled to the brim with one interesting feature after another.

Taking a step back and evaluating a tried and true formula for success, tearing it apart and rebuilding it from the ground up seems like a daunting task, but Sony Santa Monica did exactly that with 2018’s God of War. The weighted, revamped combat system shines beautifully as Kratos fights his way through hordes of Norse enemies. The addition of Atreus to the adventure may have left many fans weary at first, but proved to be nothing but a perfect example of how to incorporate a faithful companion without the game turning into a baby sitting sim. The gripping narrative between the grueling father and timid son grows into something so deep and personal, it’s hard not to be moved by the budding relationship.

God of War on PS4 is not only one of the best action games of the year, but easily sits atop many GOTY nominations, as well. Soft rebooting a franchise as beloved as Kratos’ epic saga was a brilliant move by Sony Santa Monica, and one that has given new life to a waning series.

Insomniac’s take on the web-slinging Marvel superhero brought new life to the history of Spidey appearing as a video game mascot. Taking to the skies in Manhattan has never felt so real and addictive with the graceful swinging mechanics and non-stop traversal action. On top of never wanting to fast travel due to the satisfying nature of slinging your web from building to building, the combat spices up an already thrilling battle system making players feel like they’re not only capable of super hero abilities, but have been putting these skills to use for some time. The direction to make Spider-Man already an experienced veteran in crime fighting at the start of the game was a bold move, but one that paid off handsomely for the entire adventure.

The perfect combination of engaging combat, tireless navigation and a memorable narrative full of a familiar cast of Spider-Man characters, the latest video game entry from the comic book world stands proudly as one of – if not, the – best superhero title. It’s hard not to be excited for a sequel from the veteran game studio in the future.

2018 may not be completely over yet, but these stellar action titles are holding on as the best in class to hit stores this year. While there’s plenty of other remarkable titles from all over the gaming spectrum we’ve seen this year, these five action games are sure to keep any engaging action enthusiast glued from start to finish.