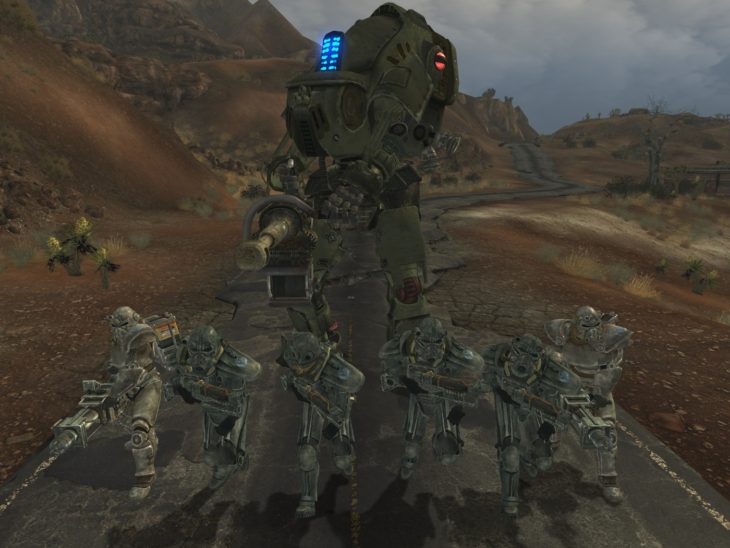 Gaming mods have made video games even more creative and imaginative, and Bethesda has one of the most massive mod libraries dedicated to these special game changers for two of its biggest franchises. Let’s take a look at some of the best mods for Fallout and The Elder Scrolls games the modding community has to offer.

Developed by Obisidian, this 2010 Bethesda published title expanded on the glorious Fallout 3 experience and placed players into the Fallout universe, among the tired and helpless civilians of the vast desert of New Vegas. With the popular Power Armor to equip in the dangerous wastelands, 2014s Titanfall provided players with monstrous version of Power Armor, now available in New Vegas with the TitanFallout mod. Towering over enemies in your automated destruction machine, climbing in and destroying everything, or everyone, around you a truly invigorating.

Skyrim invented a new life for fans everywhere, one where you narrowly escape death at the blade of the Imperials and driven to fight against the invading dragons as Dragonborn. But what if you could start off another way, give your character a more personalized life. Beginning as an Inn Keeper, wastelander exploring the vast world, a land owner/farmer or even a pirate among the shores of Skyrim. Sure there’s the visually enhancing mods or the Macho Dragon mods, but the Alternate Start mod gives something that every fans of the Elder Scrolls series can dive into easily.

Not that the Macho Dragons isn’t either…

Fallout 3 made a strong comeback for the popular post-apocalyptic series as Bethesda Softworks took over the reigns after Black Isle Studios closed down. Since then, the dreary series has stacked up tons of fans, products and adaptions everywhere. But if you’re like me and you enjoy going back nearly a decade to the revival of the series in Fallout 3, the textures and graphics can be a little, cringe-worthy. With the NMC Texture Pack, Fallout 3 returns as a solid, gorgeously put together work of art. Thanks to the dedication of the modder NielMC, Fallout 3′s gloomy Capital Wasteland is recreated with beautiful visuals without lacking on of the originality from Bethesda‘s initial design.

More Where That Came From – Fallout 4

Upon entering the Fallout universe, the wonderful and catchy sounds of Diamond City Radio beckon your ear buds. After a while the songs play through their loop and the post-war 19502 era songs start to lose their charm, only slightly. However, that’s all changed with the More Where That Came From mods, adding 111 more songs appropriately themed to fit in the Commonwealth world, your adventures through the wasteland got a huge playlist to keep the heads bobbing while you mow down super mutants.

Oblivion expanded on the Morrowind exploration and provided the path for a broad and vast land in Skyrim. A true cornerstone in sandbox RPGs, The Elder Scrolls games also gave gamers a large list of magic spells. With Midas’ Magic Spells of Aurum, hundreds of new magical spells are added, giving fans the opportunity to do otherwise spectacular actions like riding upon magic carpets or turning your enemies into gold, nothing is holding you back from conquering the lands of Cyrodiil.