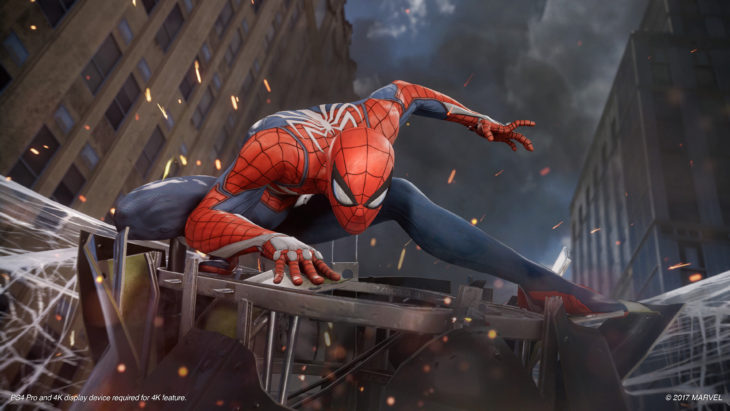 Do Whatever A Spider Can…

If you’re a fan of comic books, the Marvel universe or just the web-slinging super hero himself, Spider-Man on PS4 is shaping up to be a perfect fit for you. But Insomniac’s upcoming open world action-adventure game isn’t only appealing to the die-hard fans of Peter Parker, but is magnificently opening the doors for success from a wide range of Playstation 4 owners all around.

Here’ 5 awesome features that displays why – not only comic book fans – but PS4 owners of all tastes might want to consider picking up this Marvel-ous looking super hero title.

One feature that should be made abundantly clear is that players will be taking the reigns as Spider-Man who traverses the massive New York City map mostly by his web-slinging movements. What separates the upcoming 2018 release from other Spidey games is how authentic, organic and physics based the method of travel has become.

Developers at Insomniac have expressed how important it is to really nail the physics of the web-slinging itself. In an interview with GameInformer, Creative Director Bryan Intihar and Game Director Ryan Smith, both address how crucial elements like staying in constant motion, attaching Spidey’s web to actual anchor points and gaining momentum help create a fast, fluid and experienced feel for traversing through the city, like nothing we’ve witnessed before.

While many fans of the comic book super hero that is Spider-Man may be expecting familiar setting and storyline from the Marvel Universe, Insomniac has been given creative freedom by Marvel themselves to come up with something completely original. We will no doubt see many familiar faces from the series make an appearance in the upcoming action game, new light will shine on the web-slinging plot line where we see a more adult Peter Parker; one that has been donning the Spider-Man alter ego for 8 years prior to the game’s story. Waiting to see what the team at Insomniac is cooking is becoming much more exciting, as they’ve proven themselves worthy story tellers throughout the years.

The combat system within the next-gen of Spider-Man games needs to have a realistic feel of adrenaline fueled, fluid movements. Similar to what we’ve seen out of the Arkham series with Batman and developers Rocksteady, Insomniac is dedicated to bringing the acrobatic abilities to life with the upcoming release. Stringing together attacks and defensive abilities with ease is all-too important for giving players the freedom of feeling like an unstoppable super hero. And with an extra special meter which fills during combat, Spider-Man will be able to capitalize on his super human strength with deadly assaults and powerful combos.

With an original story from Insomniac, it’s good to know that plenty of well-known characters will be making their way into the game. What might be just as important is giving players and fans a worthwhile foe to bring the fight to. And with Spider-Man 2018, the list of villains is not only brimming with infamous might, but bringing more than just a couple of insanely powerful super villains to the mix. Spider-Man will be set to take down the Sinister Six – a group of known deviants who have recently been released from the RAFT prison by none other than Electro.

On top of this, the E3 trailer displayed a few other note worthy nemesis’, such as The Vulture, Rhino, The Scorpion and Negative Man. And this is only a short glimpse of what we’ve seen so far. You can bet Insomniac has a few secret reveals still waiting to be discovered once the game releases.

One of the best options in massively built open world games is the ability to travel anywhere on the map almost instantly. While this has been more common in open world games as of recently, Spider-Man doesn’t plan on halting this option with the soon to be released Spider-Man. Quoted as “four to six times bigger” than Insomniac’s most recent IP, Sunset Overdrive, players can expect New York City to provide players with the ultimate playground to unleash Spidey’s powerful abilities. Being able to tackle this giant pretty much right out of the gate may have many of us sidetracked from the primary plot line, just so we can explore the massive metropolis using the authentic web-swinging capabilities.

Spider-Man is set to release exclusively on the PS4 on September 7th, 2018 and is developed by Insomniac Games.