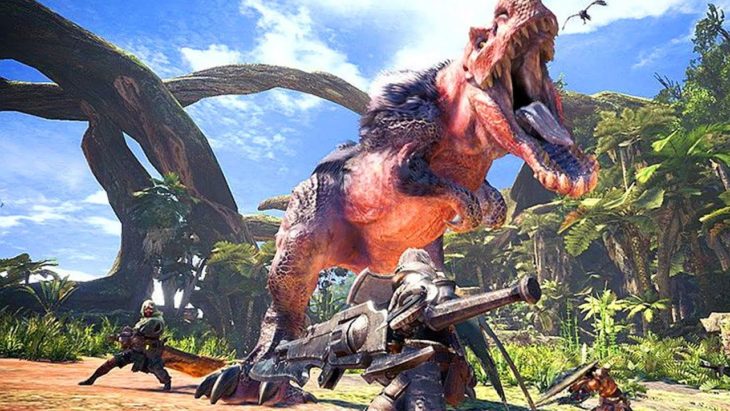 The Labor Of The Grind

Many video games today provide the distinct nature of pushing players to complete challenging tasks, achieve rewards through steady progression and often delivering the satisfying feeling of accomplishment through the relentless efforts of the enduring grind factor. While 2018 has seen a healthy dose of quick-to-the-point action games and smooth narrative experiences, there have also been a handful of grind-heavy endurances that keep the players engaged for up to hundreds of hours.

So, let’s take a look at the biggest, grind-iest games released in 2018 that players can jump into for a lasting adventure full of an unceasing amount of tedious legwork.

Releasing back in March of 2018, Rare’s Sea of Thieves is a beautifully crafted pirate adventure game that puts players together in a sea-worthy adventure, as well as finds them plundering others for their hard-earned treasure. The online experience is filled with repetitive treasure hunts, sea navigating action and combat, and hordes of skeletal crews to keep away from your piles of loot. While exploring the open seas with your crew of close mates is rewarding all in its own, finding your way to the legendary quests requires a mighty haul of experience. Becoming a Pirate Legend requires players to max out each of the three quest factions to the max level of 50.

Making your way across the sea from island to island, completing quest after quest isn’t a quick feat, as there is no fast travel option, and the ship navigation system does take a bit of time to get going. Regardless of how much you pour into Sea of Thieves, be prepared to put in a massive amount of time repeating a large portion of relatively similar quest lines throughout the course of the game – that is, if you’re hoping to reach Pirate Legend – which offers brand-new quests to fit your new title.

Fans of the Monster Hunter series know just how much time it takes to gather up the best equipment the game series has to offer. In World, not much changes in this aspect as players must take on tough monster after tough monster in order to collect valuable materials used for crafting vital armor pieces and weapons. The deep weapon tree sees players constantly one-upping their favorite monster slaying tool with the promise of increasing its power ever-so graciously.

In a game where each battle can last anywhere between 5 to 30 minutes, grinding out monster after monster in hopes obtaining that rare material used for the next weapon upgrade would feel like a heavy chore in almost any other game. But, in Monster Hunter World it typically just feels like part of the game where that’s essentially the entire point. Putting in literally hundreds of hours to get the best armor of your liking and top-tier weapon in the class of your liking is exactly what makes Monster Hunter World one of the most grind-heavy games of 2018.

Related: Where Are All The New First-Person Shooter IPs?

The Switch may have started off 2018 a bit slow in terms of exclusive content, but once Octopath Traveler hit the hybrid console, owners began singing another tune. The old school approach to the gorgeous RPG format practically begs for grind heavy gameplay, which is why it’s not one bit surprising as to how much of a grind the game actually is. As you embark on the 8-person adventure, players have the option of choosing which character arc to follow at nearly any point in the game. But, getting your character, or even party, up to snuff to take on later chapters of the game takes a good chunk of tedious, repetitive combat throughout the course of the game.

Luckily, the combat system is a sheer joy to partake in with worthwhile strategic tactics and personalizing job systems. However, pushing the story of each character forward won’t come as fast as many would hope, as taking on evenly matched or lower leveled enemies is a pretty standard tactic for obtaining a high enough level to proceed comfortably. Again, the grind is real in Octopath Traveler, but the unique visuals and addictive battle system (not to mention intense musical score) keeps players thoroughly engaged through the monotony.

Over the course of the Assassin’s Creed saga, the mostly annual series has seen some game-changing additions to the quality of gameplay. Now, the series is veering towards an RPG heavy adventure more than ever before, and with the change comes a massive amount of grind. Players looking to swiftly work their way through the storied campaign might want to re-think their approach as they will often find themselves dealing with over-leveled enemies due to trying to shortcut around the pace of the game.

While 2017’s Origins introduced the shift to an RPG layout, Odyssey takes this formula many more steps forward. Completing the massive amount of side quests and challenges keeps the player on pace with the story leveling, but that will net players at least twice as many hours poured into the game. While many great aspects stand out among the latest AC entry, the grind can leave the game feeling a bit heavy in extra gameplay. Nevertheless, Odyssey stands as a solid turning point in the series – even with the relentless grind.

The massive multiplayer only FPS game should come as no surprise as a grind heavy title. With tons of unlockable equipment through a proportionate amount of game modes, including the brand-new battle royale Blackout mode, Black Ops 4 is flooding with lengthy unlock times and even worse, the option to purchase said equipment via microtransactions. What’s worse than that, is that Treyarch has updated the massive grind to a quicker pace, but the top-tier weapons still only seem attainable by the most devoted CoD players – or those with a thick wallet.

Trying to forgo the game’s Black Market and spending nearly twice as much on spendable points as you would on the game itself, attempting the painful grind seems too tedious, even for the most active players. As really the only negative spin on grinding on this list, Black Ops 4 may take online competitive gameplay to bold new heights, but the greedy push towards microtransactions via lengthy weapon tier unlocks sits pretty sour with a large chunk of the Call of Duty community.

Oh, What A Grind

Grinding isn’t always a bad feature in video games when it’s done properly. Some games allow players to grind for hours and hours without the action feeling stale or overdone. However, the same cannot be said for every new title looking to cash-in on cash grab shortcuts like microtransactions and overly repetitive gameplay elements. Fortunately, we as the consumer have a choice of what pleases us and what we’re looking for in a game, so if a heavy grind isn’t what you’re looking for – stay away from these 5 titles, altogether.