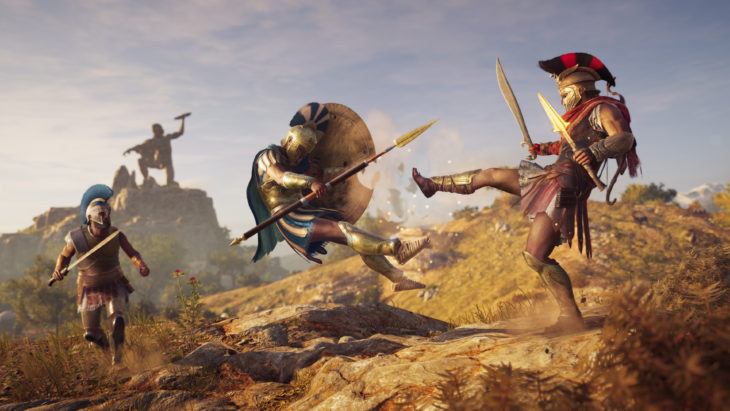 So Many Games, So Little Time

The holiday season is in full swing for 2018, and arguably the best month in terms of releases is right around the corner. While many of us have been ‘swinging for days’ through Manhattan in Marvel’s Spider-Man, or stopping a Mayan apocalypse in Shadow of the Tomb Raider – September hardly holds a flame to what’s to come in the next few weeks.

Here are 6 of the top games releasing in 2018, and they’re all coming this October.

The tough-as-nails platformer returns after a long wait as Capcom releases Mega Man 11. With slick visuals and a couple new tricks up the blue bomber’s blaster sleeves, this new release looks like a perfect fit for both long time fans and newcomers to the series. Utilize the unique abilities to slow down time with Speed Gear and temporarily increase your attack with the Power Gear, offering a more intense method to tackle the reflex-demanding platformer. Catch Mega Man 11 on October 2nd, 2018 for the PS4, Xbox One, Nintendo Switch and PC.

Racing fans are eager to get their hands on the latest in the Forza franchise as Horizon 4 brings the largest open world racing experience yet. Set in a sprawling United Kingdom auto-playground, players will share an online racing world with up to 72 players in each server. With well over 400 licensed machines within a naturally organic world filled with dynamic weather and changing seasons, Forza Horizon 4 looks like it could be one of the best racers in this generation. Forza Horizon 4 speeds into stores on October 2nd, 2018 for the Xbox One and PC.

The first of three big Switch titles hitting this holiday, Super Mario Party brings the fun and mini games to the hybrid console. Taking the party fun online for the first time, competing in 2v2 mode, up to 80 new mini games and utilize the Switch’s unique table-top mode with multiple systems for a brand-new experience in the digital board game series. Catch Super Mario Party on the Nintendo Switch on October 5th, 2018.

After last year’s inspiring reconfiguration of where Ubisoft would like to take their biggest franchise with the release of Origins, Assassin’s Creed Odyssey looks to be taking that many steps forward. With tons of new and returning elements, such as selective dialogue, more equipment and weapon pieces, intense naval battles and invigorating combat mechanics, Odyssey is making an awe-inspiring return to the new formula of the series. Take a step into the Peloponnesian War and grab Assassin’s Creed Odyssey on October 5th, 2018 for the PS4, Xbox One and PC.

What appears to be taking a massive hold on the battle royale crowd, Call of Duty: Black Ops 4 is disbanding from the traditional single player campaign and slamming full throttle into the online multiplayer realm. With its new Blackout mode already garnering impressive praise for its mix of Call of Duty formula blended beautifully with the battle royale experience, Black Ops 4 looks like it could be the most promising release in the series in quite some time. Call of Duty: Black Ops 4 releases on the PS4, Xbox One and PC on October 12th, 2018.

Related: The Ups And Downs Of The Nintendo Switch Online Service

If you haven’t heard of Rockstar’s big up and coming open world western title, there is tons to be said about the game. With an insanely detailed world filled with immersive AI and physics, a massive map of the waning wild west era and loads upon loads of extra content to explore, Red Dead Redemption 2 is already on the top of many game of the year lists. Taking on the role of Arthur Morgan as a part of the Van der Linde Gang, players will build and improve their camp settlement all over the vast western playground. Dig into Red Dead Redemption 2 on October 26th, 2018 for the PS4 and Xbox One.

As if September didn’t hand us a slew of exciting and satisfying titles already, October is throwing us one mouth-watering title after another. While the releases don’t necessarily stop after Halloween, October is definitely looking like the hottest month of the year, thus far.