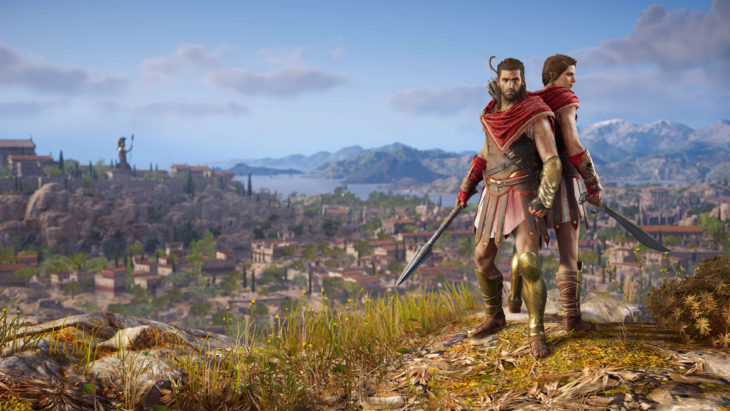 Leading Up To The Next Assassin Adventure

Assassin’s Creed Odyssey is the next installment in the massively popular series out of Ubisoft, and one that looks to take tremendous steps forward in the franchise. Taking the narrative 400 years before 2017’s Origins release, players will embark on a journey and explore ancient Greece in the most RPG-like Creed title yet. Along with the deep progression and newly added dialogue options, here are a few other new details regarding the upcoming assassin adventure.

While not especially new to the series, the parkour-based tomb puzzles have been missing from the series for some time. Last making their appearance in Assassin’s Creed II, these tomb labyrinths provided a different approach to puzzle solving and guiding your way through ancient underground areas. As a break from the usual tower scaling, Templar slaying or citizen freeing, these underground passages gave players a bit more depth to the now ten-year old series. Here’s to hoping the technological improvements can help create a less frustrating experience than those of the latter entries.

The weather systems in the Assassin’s Creed series always seemed to come off a bit bland or shallow. While weather has made its self present in entries like torrential storms in Black Flag, sandstorms in Origins, downpours in Unity, and even seasonal changes akin to Assassin’s Creed III, the weather has never been a consistent addition to the series. However, in Odyssey players will fight off ferocious storms in the return of naval combat across a number of different environments; which leads us into our next new detail…

An Array of Biomes and Environments

While Assassin’s Creed Origins advanced the series to new heights with an array of much-needed updated features, the vast open land of Egypt left many with a mostly dry palate (no pun intended). Odyssey is reported to have 7 different biomes and environments that stretch Ancient Greece across a flurry of different sensations. Not much else has surfaced pertaining to what type of atmosphere’s we’ll be experiencing, but we’re excited to explore a world that feels fresh and gives the players breaks from one environment to the next.

As earlier stated, the return of naval combat will help keep the content in Odyssey rousing and supplementary. While we’re not expecting the extent of naval focus similar to Black Flag, we can expect a solid dose of historically accurate combat sequences taking place in the sea. Scrapping the devastating cannon fire for arrows, javelins and, of course, ramming – Odyssey is said to bring a much more arcade like approach to help alleviate any growing pains from anyone new to the naval combat tactics. Add in completely wrecking a ship and watching the crew become scarfed down by sharks amidst crashing waves, and it seems we have the makings for some fierce moments at sea.

With the scrapping of the brotherhood feature a few entries back, many have been hoping to see a return to some sort of recruitment system. Assassin’s Creed Odyssey will mark the return to helpful allies now known as the Call to Arms. Players will have the option of using Call to Arms in both naval and ground combat to attract and fight groups of enemies. Players can also upgrade your allies with useful perks and cosmetic enhancements to better suit your play style.

Since the announcement and reveal of Assassin’s Creed Odyssey many have pondered where the story will fit in with the Assassin’s timeline. While the story takes place some 400 years before Origins – which is the start of the Assassin’s Brotherhood – Odyssey is said to hone in on the First Civilization artifacts in which created the ongoing conflict between the Assassin’s and Templars. While we won’t see story advancement in the actual Brotherhood itself, the overall narrative will continue to pour on unknown details regarding the elaborate timeline. We’ll also pick up right after Origins in regards to the modern timeline struggle of Layla and her efforts with the animus.

Along with selective dialogue options, players will also have multiple endings depending on specific choices to choose from, as well. In both the main plot line and side questing narratives, players choices will have the ability to present different outcomes. With very little covering the multiple endings has been made available, it will be interesting to see how the developers incorporate tide-shifting choices into a series prequel that essentially starts the entire decade long franchise off.

Something completely new to the series but fairly common in other open dialogue RPGs, romantic relationships will now have players deeply engaged in friendly NPC encounters. Whether or not players choose to take part in these relationships is completely up to the player, but can also have a lasting effect on the overall outcome of the story. And if players feel they may have made a poor decision in picking out their romantic partner, Odyssey will allow players to opt out of their affinity at any time.

Assassin’s Creed Odyssey will take fans to Ancient Greece during the Peloponnesian War giving players the choice to play as either Alexios or Kassandra. The game is set to release on October 5th, 2018 for the PS4, Xbox One and PC.