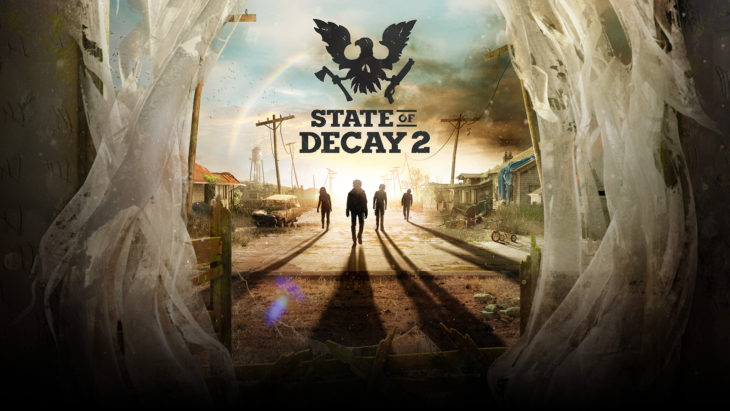 Adding more to a bit of everything…

The Microsoft gaming brand hasn’t exactly been hitting the ball out of the park when it comes to delivering exclusive experiences like its competitors as of late; but eventually things have to start looking up for the struggling juggernaut. State of Decay 2 looks to start that shift with a gritty survival experience built upon an already solid foundation constructed from its wildly successful predecessor.

In most survival games players will consistently take on the sole role of a unique hero fighting against enemy threats and deadly foes. This, however, is not the case in Undead Labs upcoming sequel – State of Decay 2. Players will assume many different characters all apart of a community fighting to stay alive. Swapping between characters with unique presets and skills is all part of the experience with a greater emphasis on team work and cooperative gameplay.

Players will explore the open world riddled with zombies with the help of their gathered allies of survivors. The sense of survival becomes ever-apparent when traversing through the lengthy day/night cycles that help bring the alluring world to life. The solo campaign will have players teaming up with tons of different community members tossing aside the isolated feeling from most other zombie survival titles. Relying on one another’s unique skills and assets seems an important role which helps introduce co-op style gameplay for those not seeking online companionship.

The deep community characters is all part of the feeling of teamwork and is meant to purposely take away the recurring “selfish” or “one man army” found in countless titles that have come before. While many fans of the original demand deep character customization for a liberating personal touch to the survival experience, adding customization options to a game that’s more focused on community play and evolving multiple characters story would hinder what Undead Labs is attempting to accomplish. The growth of one man or woman has been done with relentless efforts in year’s past; so how about growing as a community of men and women, instead?

It’s a bold move but one that could help State of Decay 2 stand out from the overflowing number of survival titles in the industry. Adding individual choices for each character in your community helps mold the story to a more personal approach while the game continues to push players towards teamwork and cooperative challenges. Players won’t simply overcome overwhelming odds but will need to rely on strategic combat mechanics for a much more rewarding experience.

Players will continue to build their community by rescuing and recruiting additional survivors discovered throughout the zombie infested world. Obtaining vital gear and resources also play a huge part in the unique base building aspect of the game. Additionally, the larger your community grows the more resources will need to be collected through exploration and removal of the various hordes of undead.

This time around with a heavy focus on cooperative gameplay, players will not be limited to single player campaign modes. Online multiplayer has been added to the State of Decay series featuring up to 4-player co-op across the dangerous open world. When dropping into an online session or hosting one with your friends, each player continuously maintains their own community within their game. There will always be a sense of continuous progression in your growing community, whether your playing online or not.

As players continue through the story and adventure of State of Decay 2 individuals will mature and strengthen their skills, as well as continue to build upon their community and fortify their base. Collecting valuable resources to increase your base defense, add new, useful facilities and expanding your community through unlocked abilities and game-changing options is sure to add a rewarding sense of accomplishment and progress throughout the game. Each individual will have personal objectives, survival advice and accomplishments which will help improve leadership skills and help produce new rewards and benefits throughout the story.

The many survivors you’ll recruit for your community will vary greatly in many different skills, both on the battlefield and off. While one survivor may have boosted skill attributes in weapon handling and cardio, another may be proficient in hand-to-hand combat and mechanics. Increasing stamina, reducing weapon sway or handling themselves in stealth situations are only a small few skills that each character in your community can come equipped with. Upgrading these skills via numerous tasks and objectives helps create a much more threatening and skilled character.

Each Survivor Plays an Important Role for Survival

These survivors may also increase in rank within their community. From recruit to civilian, hero to leader – each survivor can enhance their skills by gaining experience in the field and become a vital support role. Morale also plays a huge part in creating a properly functioning community as high morale increases your survivors outlook and positivity relating back to better survival chances, while lower morale can do the exact opposite. As survivors increase in rank within the community they begin unlocking new traits unique to each specific character background.

One leader role can be assigned to one of your survivors, but each one will take on the role differently, each with altering effects and abilities. Some survivors are Warlords which utilize an ammo crafting ability, while other may be prone to the Builder category – allowing adding sniper coverage through constructing towers. Once selected, the leader’s skills and base building inheritance begin and add even more progress to your ever-growing community.

Making a return from the original State of Decay, base building improves on just about everything from its predecessor. Players will move into their base and begin fortifying it through a series of upgrades, such as adding farm plots, generators for power, fuel, as well as water and other mineral resources crucial for survival. Along with adding plots of land and facilities to your community, players will also craft and construct numerous weapon mods, consumables and explosives all at the comfort of your base. Keeping your survivors within your community will be all-too important as facilities will need managed and will often require constant supervision from one of your community members so it functions properly.

The Sickness of the Blood Plague

Of course, when away from the confines of your humble community players will need to know the basics of survival when exploring the zombie infested lands. And something completely new to the series is the introduction of the Blood Plague. Blood plague zombies and blood plague hearts both revolve around the new blood plague mechanic. Blood plague acts like a sickness contracted from blood plague zombies (which can be pointed out by their glowing red eyes) increasing the amount of strategy, as well as moments of panic throughout your adventure.

Related: Sea of Thieves Video Review – Dazzles in Performance, While a Bit Lacking in Content

Survivors coming into contact with the dreaded blood plague will show a meter that fills every time you’re attacked by an infected zombie. Once the meter fills completely a timer begins to tick, creating a permadeath situation once the timer reaches zero. To avoid losing one of your survivors to the untimely death of the blood plague, players must find or craft a cure discovered somewhere within the world. Blood plague brings a promising aspect to the world of zombie infestation and a true look on the survival methods of the zombie apocalypse.

Blood plague hearts are discovered throughout the world and act similar to hostile base or zombie breeding grounds. Destroying enough hearts within a region helps liberate the area making for a bit safer conditions to travel in. But these hearts are typically swarming with blood thirsty plague zombies, so the risk involved is certainly increased. Planning a strategic plan of attack seems like a crucial aspect in not only tackling the blood plague hearts, but throughout the survival experience in State of Decay 2.