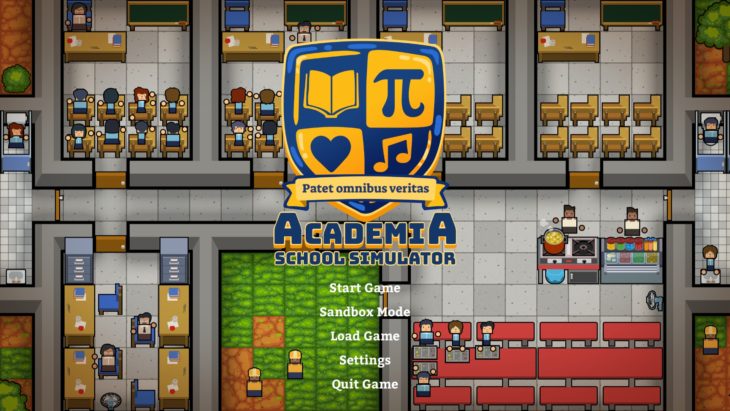 Academia: School Simulator is the new simulation-building game which was just released into Steam Early Access. The game is currently in its first build so it doesn’t contain a huge amount of content right now but is it worth purchasing right now? Let’s find out.

As of the time of writing, there’s around one hour of gameplay in Academia. If the game looks similar to Prison Architect, that’s because the artist from the popular prison simulator is also working on this project. So there’s bound to be some crossover between them as a result.

At the very start of the game,  you get to design a school badge, give it a name and assign it a motto. This is a nice touch from the developers as it adds a small amount of realism to the highschool simulator.

Players start the game with some zones already drawn out, however, it’s possible to re-arrange and re-draw them. As expected from a game in this genre, it’s possible to draw a layout of what you’d like the school to look like without the workers actually doing anything. This is great for those who like to strategically plan their school before starting to construct everything.

It features a nice number of grants that help the players expand and construct their school. There’s no actual tutorial in the game yet so this acts as the tutorial to teach the player how to construct the school and what zones to place.

There’s only a small number of zones in the game right now. They’re the standard rooms that you’d see in a high school so the developers don’t really need to focus on adding more zones to the game at this point. However, they are running a poll where there’s an option for specialist rooms such as laboratories for the older years.

Currently, there’s only the option to construct an American Highschool. It would be a nice to have more options in the future but the developers are already working on a lot for it. They’re being very open about the development of the game. They have released their todo list to show what they’re currently working on.

Academia: School Simulator is worth the buy if you’re interested in helping the developers move the game forwards right now. However, it is still lacking in content. There’s around 1 hour of gameplay in it but this is sure to expand as time goes on.