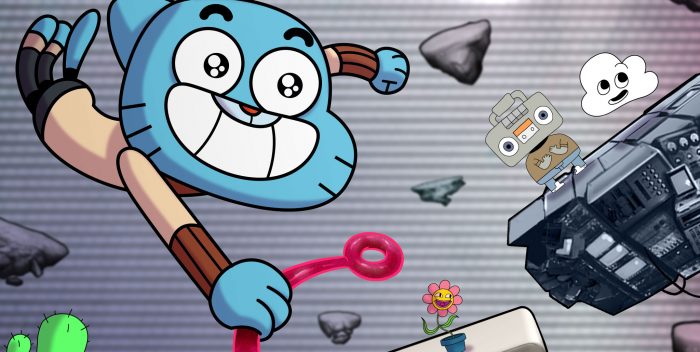 The library of mobile cell phone games has increased with a brand-new Cartoon Network title, Wrecker’s Revenge, which takes puzzle platforming to new heights on mobile devices. Placed into the beloved world of The Amazing World of Gumball, you’ll take control of the child-like character and vow to put an end to Doctor Wrecker’s master plan and save his friends.

Set out into space to track down friends and family members trapped into the Void, Gumball will platform his way across dangerous levels and rescue his family before they are gone from existence forever. The missing citizens of Elmore are in Gumball’s hands – and yours – to help guide through the unique levels.

Through different islands found in space, Gumball will leap from one to another in search of your missing friends. Plenty of obstacles lay in your way as you traverse through the game’s story, as well as the ever-lying dangers of floating off into the vastness of space. Each dynamically generated level hosts tons of surprises and require careful planning to successfully navigate through the levels.

Taking out Doctor Wrecker will take more than just careful planning and skilled platforming, but also the use of unique items to help power Gumball up. Hairspray rockets, giant mummified hands and plenty of other special ability items will prove useful when fighting for Elmore citizen’s freedom.

If a fan of the popular American TV channel, Cartoon Network, and its beloved cartoon – The Amazing World of Gumball – be sure to grab this free mobile title today. Wrecker’s Revenge can be downloaded for no charge at the App Store, Google Play and the Amazon Appstore.

Check out some gameplay footage of Wrecker’s Revenge below: