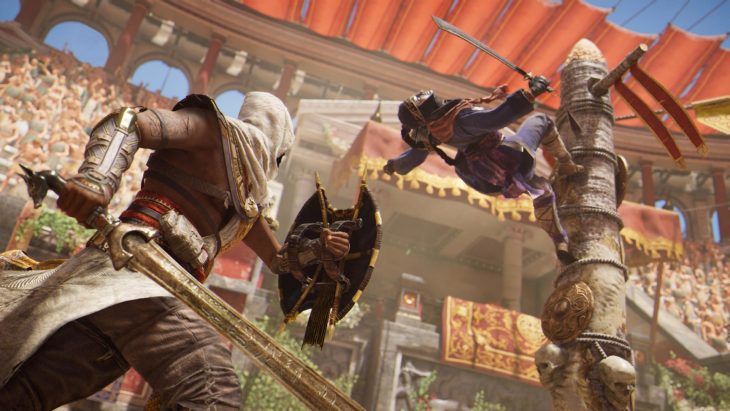 The Assassin’s Creed series has been something of a mixed bag. While the earlier games in the series absolutely helped to redefine open-world gaming, the later editions have been better known for their shoddy launches, terrible microtransactions, and fantastic ability to be turned into memes. Seeing which way the wind was blowing, Ubisoft took a year off from the annual franchise in order to breathe some new life into the series. Released in the middle of a rush of new games, Assassin’s Creed: Origins was a leap of faith for the developers – and, fortunately, it’s one that managed to land.

Back to the Roots

Assassin’s Creed Origins suffers from a generic name, even if it’s more fitting than most. This really is a game about the origins of the titular Creed, something you’d be hard-pressed to ignore if you’ve seen a single press preview of the game. This time, the game goes all the way back to Ptolemaic Egypt (look it up – it’s cool!), putting players in the shoes of the founders of the first Brotherhood. It’s obviously the kind of stuff made to appeal to series junkies, the kind of people who spent most of their time in the earlier games reading database entries.

Oddly enough, though, you don’t need to know anything about the series to play this game. Far more than any other entry, this one stands alone. There are plenty of fantastic call-forward in the story itself, but they don’t really matter. Instead, you get a self-contained story of conspiracy and revenge, one that will work for anyone who enjoys a good open-world slaughterfest.

The game’s story might go back to its roots, but the game’s mechanics are totally new. Assassin’s Creed has long been a game in which combat really comes down to the parry button. If you’ve played games like Arkham Asylum or Shadow of Mordor, you know this system already – it’s all about finding a good rhythm and unleashing devastating counter-attacks. Origins has left this type of gameplay behind for something that feels a little more like the Witcher 3 or Dark Souls.

The new combat system relies heavily on movement and timing, but it’s also dependent on gear. It takes a note from RPGs by introducing not only a leveling system but also weapons that have some hard numbers behind them. If you’re going up against a tough foe, you’ll want to make sure you equip a weapon with the right stats. Even the venerable hidden blade, the one-hit kill staple of the series, has lost its edge unless it’s properly leveled up. Combat has finally become tough and, for many, much more engaging.

In our opinion, this game really does feel like a fresh start for the series. It combines what’s worked for the last ten entries in the series with a much-needed reboot to the combat system. The game isn’t quite perfect, but it is fun. If nothing else, it’s made us anticipate the inevitable next entry in the series.