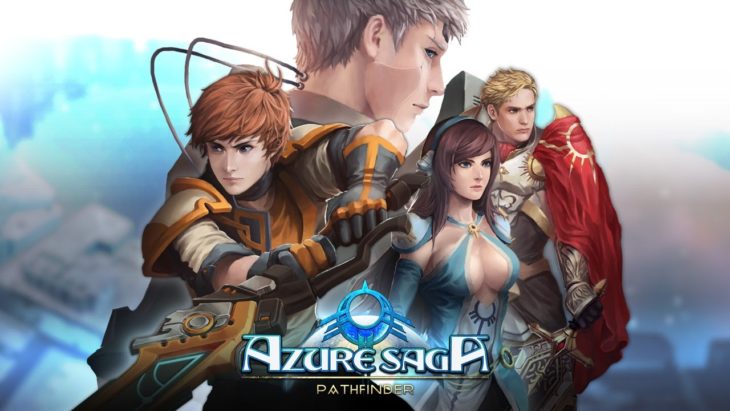 Finding Your Way Home Won’t Be So Easy

The simple and tasteful gameplay of Azure Saga: Pathfinder isn’t as unique or as entertaining as any old-school style turn-based indie JRPG around, but somehow manages to still satisfy those JRPG cravings. Taking on the many monsters throughout the distinct setting with the subtle and methodic combat style, Azure Saga delivers an excellent fantasy experience.

After crash landing on an unknown planet, Synch and his android companion, Noide, embark into unknown lands in hopes of finding a way off the foreign lands. As you explore around the isometric viewed lands you’ll soon come in contact with a native of the planet. Desperate to find your way off the planet to make your way back home, you must find the appropriate power parts to repair your destroyed ship.

Azure Saga isn’t providing anything extremely unusual to the round table of traditional turn-based RPG games. Players will explore around sectioned portions of different areas looking for key items and wiping out various enemies. You’ll meet a number of interesting characters, but won’t stretch out any game-altering secrets your way either. The standard style of strategic combat is a nostalgic joy to experience, but again, isn’t exactly a game-changing one.

Like any mainstream RPG Azure Saga has its own currency system of which players are able to spend on upgrades, armor pieces and potions. Using the standard health/mana meter system, players will need to keep use all of the traditional methods of keeping your party alive, as well as dealing devastating damage to the waves of monsters that will attack when exploring the unknown lands.

When engaged in combat players will be plunged into the familiar turn-based tactics we’ve seen time and time again in the RPG family of games. Offensive physical attacks, powerful magic attacks, healing spells and potions, and defensive guarding are all viable options for strategically winning battles. As you progress further the crushing Fury attacks help deal massive damage against the much stronger foes.

As you land blows against enemies each character in your party will increase their fury meter. These special attacks do not use any mana to pull off, which help provide a more than useful attack when feeling overpowered. However, another useful tactic is the United Attack, which not only uses mana but requires all three party members to have a sufficient amount of mana as well.

Battle to Save Humanity

Strengthening your party is as easy as winning battles which rewards players with the traditional experience point system. The staged character development isn’t the most in-depth or exciting aspect of Azure Saga, but allows players to casually increase their party’s strength, health and mana meters. New skills and abilities are also learned through gaining new levels, so it does become vitally crucial to continue earning experience through taking out numerous baddies.

Characters can also become stronger with the use of the many different pieces of equipment. Each character is able to equip a couple of pieces each, also leaving a slot for upgrading pieces with jewels. Jewels can be placed into a single piece armor to help pad stats like increasing defense or offense, damage dealt to particular enemy types or increase the amount of health a particular character is equipped with.

The precious jewels can be found throughout your journey into the many different areas of the foreign land. However, players are also able to combine specific jewels with one another in hopes of creating even stronger and more potent stat buffs. Increasing your armor rating, buff percentages and overall stats becomes vital when trying to keep your party from signing off early.

As the story opens up players will be introduced to a heroic adventure. What starts as a ploy to use foreign land resources to power up Synch and Noide’s ship quickly turns into a much deeper storyline. All of humanity is at risk and it’s up to your faithful and powerful allies to do whatever it takes to dive into a land brimming with dangers and threats that lurk throughout the vast land.

While the formula and appearance of Azure Saga: Pathfinder is staged and has been done over and over, but manages to not hold back the potential of RPG fans having a solid experience with the game. The unique and passionate characters help keep the narrative alive and interesting throughout the enduring story. The combat may seem a bit bleak and dry at first, things do eventually begin to open up for what may not be the most memorable experience in gaming; but satisfies nonetheless.

If you’re looking for a traditional turn-based RPG with a different story filled with a fantasy settings and culture, Azure Saga: Pathfinder may not be the best option, but it’s still a good one. The combat is simple enough for most newcomers to understand and all-too familiar for most RPG veterans, while the locations and story is enough to keep fans of sci-fi fantasy engrossed for the long ride.