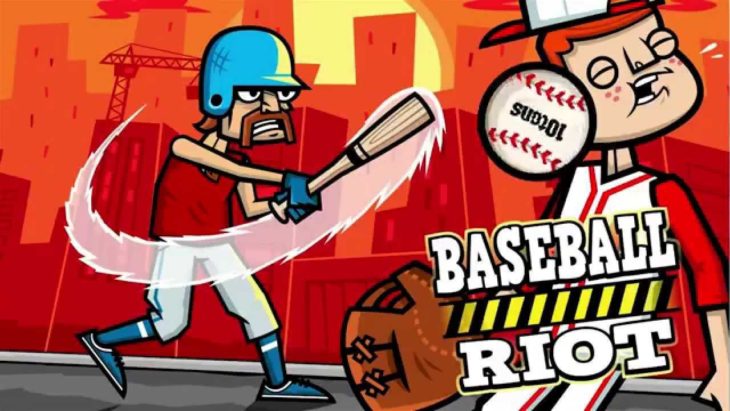 Smashing Through Your Enemies

The baseball smashing mayhem from 10tons Games – Baseball Riot – brings a familiar arcade approach with the utmost importance on strategy. Releasing as the official sequel to Tennis in the Face, Baseball Riot brings the exact same style of gameplay, but this time swapping the tennis racquet for a wooden bat from America’s past time.

Playing as the washed-up baseball star Gabe Carpaccio, you’ll take vengeance on the corrupt energy drink company that has taken over your old team. Explodz, Inc. does their dirty work by shoveling the mega drink down the throats of team across America, and it’s up to Carpaccio to take them out one by one.

The gameplay of Baseball Riot stretches across the wall of physics and challenges players to crush baseballs through an arcade-like playground of walls, obstacles and, of course, enemies. Taking aim with your handy ball and bat, players have only three tries to bounce the baseball throughout the structures and take out all of the enemies present. Ranging from just a few to well over a handful, many different enemies from enraged fans to well-protected umpires stand tall with no fear of your high-speed crushing hit.

The game is simple to understand and provides a strategy style of arcade fun that blends perfectly with the hybrid Switch console. Much like Tennis in the Face, the game continues to throw more challenges with every new arena in the campaign. Making your way across the multiple tiers of challenges, different objects and characters will surprise the player. Coming up with unique methods of taking every enemy player out, ricocheting the ball throughout the course in hopes of racking up the head count of the many players on the board.

Riot starts off easy enough with three baseballs to take out the angry fans of Gabe Carpaccio. As they sit, players will have to strategically aim their shot between obstacles and trigger bounces to pulverize the angry mob. Other obstacles lay in the path, which may also hinder both the ball and the course of action its taking. Glass panes and boxes stop the ball in it’s tracks, exploding boxes of Explodz energy drink wipes out anyone in its vicinity and destroying tubes of balls to unleash a flurry of baseballs to help score a few more points. There’s no shortage of game changing obstacles within the campaign.

A Unique Blend of Baseball Enemies

As the game moves forward, a variety of enemies begin to make their stand to stop Gabe. The standard fans don’t acknowledge the hurling baseball at all, but other characters certainly do, such as the ball players with giant baseball gloves. If the ball happens to land on the mitt, the hit stops dead. Umpires are heavily guarded with gear, so it’s vital to strike them from behind – or if you’re a solid shot – the feet. Every new tier of challenges and locations brings new obstacles and enemies throwing increasingly difficult situations at the player.

Though Baseball Riot flings an entertaining time of strategy and ball hurling fun, the repetition may only satisfy for a short while each time you pick up to play. While the story isn’t exactly engaging, the physics of the ball works exceptionally well and is what keeps players coming back for more. Often times players will begin a game of trial and error to see which strategy works best for clearing out the area. This is much of what Baseball Riot entails in way of strategy.

Along with taking out enemies using the barriers and your stash of baseballs, point stars are scattered in each area as well. These help add to your high score as you clear each level. Clearing levels is crucial as that’s how players proceed to the next area. There are well up to one hundred stages across multiple settings. Each stage has its own share of challenges to meet, like striking a certain number of headshots or using the least amount of balls to clear a stage.

Baseball Riot brings back the same formula from Tennis in the Face, so returning players have little to brush up on. The baseball physics strategy game gives players an exciting enough time with plenty to conquer, but falls up just short of anything spectacular. Seeing as how we’ve seen this same mixture of sports and rag doll flinging athletes, you wouldn’t be missing much if you choose to pass this one up, especially if you’ve already experienced 10tons other ball hurling physics title.

The exciting and humorous approach to the arcade bat swinging title is especially fun on Nintendo’s newest console. Though the gameplay tends to repeat itself throughout the course of the game, the interesting setups and levels are enough to keep your mental gears churning. Baseball Riot is fun, challenging and full of its own special blend of hilarity, but falls just a little short of providing anything new to the series.