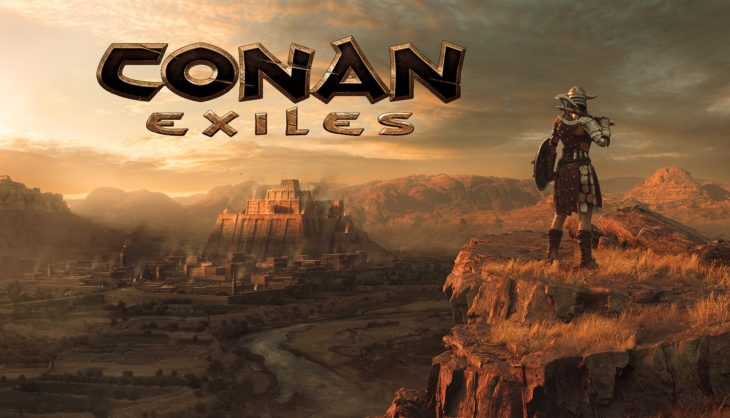 Prove Your Worth in the Exiled Lands

Surviving within the dangerous lands of Conan the Barbarian obviously presents its own set of obstacles and hard-earned challenges. With the release of Conan Exiles players create their own warrior and survive the harsh environment by collecting, crafting and fighting their way to domination; only you may often find yourself fighting against a game littered with a lack of depth within the world and subtle performance issues instead.

Starting off in the dry desert you’ll begin your survival trek right away in Conan Exiles. Scavenging is easy enough as you’re able to gather from just about every resource, and the depth of the crafting menu is impressive. Exiles isn’t so much about slaying a massive number of enemies as much as it’s about surviving and building up your kingdom.

Exiled from the city for any random assortment of crimes assigned to your character at the start, players must fend for themselves amidst dangerous enemies – whether they’re humanoid, carnivorous animal or some other heinous creature. The balancing act of staying hydrated, well fed, armored and skilled with a blade all play an important role progressing through Exiles. While passing time by constructing massive buildings and shelters all across the land can be addicting, looting and carrying the required materials can be a bit of a haul.

The game is separated into chapters which act more as a detailed progression line rather than actual storied events. Crafting your first weapon, eating a filling meal, slaying your first kill and constructing your first shelter are all important aspects to staying alive within Conan Exiles, and the unique chapter progression timeline ensures players will learn all of the crucial elements fairly early on in the game. Still, there are a few features in which players must learn on their own to help better create a more persuasive survival experience.

Having the option to partake in online PvP or PvE lobbies, as well as go it alone in offline single player, offers two varying experiences from one another. The building system is huge and vastly deep allowing players to construct gigantic structures and buildings filled with furniture, stairways, elevators and NPC triggered equipment, such as the brutal wheel of pain. When playing online in a full lobby the world truly comes to life with player-made kingdoms and creative ideas to wander across. The world of the exiled players lives and breathes in a truly riveting way, but lest us not forget we’re in the hostile lands of Conan.

However, when playing in offline single player you have the entirety of the map essentially to yourself. You’re free to build up the kingdom and span across the massive map as your own personal ruler. While crafting from the lands is much easier without having to claim materials over other players, the world comes off as incredibly deserted and overall empty. When not manipulating your own village of NPC slaves, you’ll find yourself fighting off a mild variety of hostile beasts and enemy tribe members while occasionally befriending fellow exiles greeting you with details about the world around you.

While the world looks gorgeous and offers a refreshing range of climates to explore, there’s few surprises in between each discovered region. It’s important to embark into the unknown and scavenge for useful resources, but the task of collecting materials becomes increasingly tedious when the combination of a rather small encumbered limit and unrewarding loot from defeated foes consistently repeats itself. Tie this in with often unfulfilling combat situations and sooner or later you’ll begin to feel the ever-present wear of tiresome gameplay mechanics.

Exploring the large world of Conan the Barbarian does offer some intrigue and a desirable amount of points of interest to help strengthen your warrior though, too. The handy ability to climb virtually any wall or cliffside is in the same vein as Breath of the Wild and serves its many uses, such as reaching higher ground, or quickly escaping beasts constrained to the ground. There’s no shortage of ground to cover and new sights to see throughout the exiled land, but the lack of depth and detail across each area makes it feel even more desolate than the minimal human occurrences do.

With all of the wild lifeless lands and the often repeating enemies throughout your exploration, Conan Exiles finds itself stuttering through performance issues rather occasionally. While I personally have yet to run into any game-ending bugs, there are a few hiccups that left the game feeling somewhat broken, or at the very least, still in its Early Access stage. Playing in online lobbies always shares the complications of lag from time to time, but it was my single-player experiences that left me grieving more than once.

Occasional frame rate drops would occur when facing off and surrounded against multiple enemies. Often I would witness enemies or threatening wildlife standing completely lifeless when in the midst of battle still taunting as though unaware of their frozen form. Playing on the PS4 Pro system the performance was mostly unscathed by these instances, but when they did happen it was during crucial life or death situations. Luckily, you’re able to consume a variety of different food and proteins at any time to keep your health bar regenerating during tough combat situations.

Conan Exiles presents the essence of survival well-enough for newcomers to take a dip and warm up to harsh environment over the course of a few solid sessions. However, only the truly dedicated survivalists and Conan the Barbarian fanatics may find themselves returning onward. The separate options for both offline single-player play and online PvP, PvE or Co-op multiplayer, Conan Exiles creates an enduring experience by sticking to the niche of surviving by any means necessary all while constructing your very own villa resort.

For a fun and cooperative crafting sim mixed with survival experience, Conan Exiles is a good choice, but may not be your first. If you’re a fan of the series and keen to working for every square inch, then Conan Exiles should sit at the top of the list; that is, if persistent glitches don’t scare you off first.