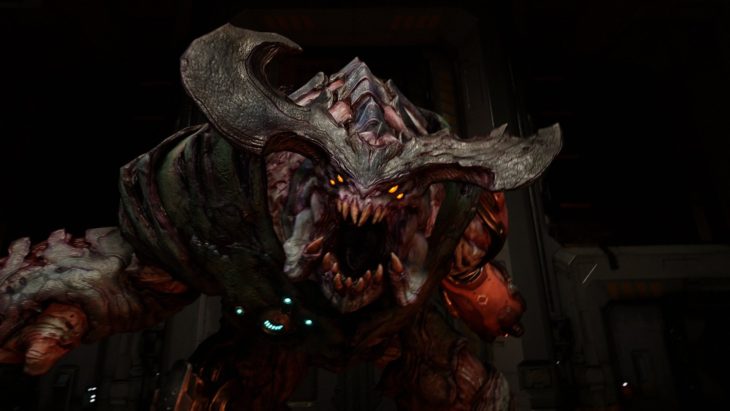 Doom was released one year ago but with the Switch version coming up, it’s time to return to this incredible FPS game. Today we’ll be taking a look at how to defeat the first boss in the game, the Cyberdemon. An epic and tricky fight, however, defeating him is easy if you know the right tips.

The battle is split into two phases

A single jump is enough to dodge the low attacks while you simply need to stand on the floor to avoid the high ones.

To dodge these you simply need to move out of the way of the rockets. It also helps to ‘lead’ him into shooting at you when in certain positions where it’s easier to get out of the way.

Watch the floor. You can see where the rockets will land thanks to the indicators on the floor which lets you move out of the way.

When fighting in the first stage, you’ll want to hit him with heavy and powerful shots. So use the Gauss Cannon and Rocket Launcher as much as possible. In addition to this, frag grenades can also be a powerful weapon during this fight.

However, you shouldn’t be using the BFG during this section of the fight. This is best used for the second phase. When the demon is ‘defeated’ you’ll need to run up to him to perform a glory kill but naturally, he doesn’t die the first time.

These are one hit kill regardless of how much health or armor you have so you’d better move out of the way.

This traps the player in a rock lane. He then throws the energy waves at the player using the same pattern as before. You just need to jump and stand still to dodge the attacks. Once you get into the pattern, this sequence will become easy.

The BFG in this phase is very effective. Hitting him with it will actually stun him which then allows you to hit him with rockets. Doing this will cause him to drop ammo, health and armor.

The worst thing about the second stage is death. Dying here will cause you to respawn with little health but using the BFG trick will allow you to quickly grab some extra health. It’s the perfect trick for when you’re in trouble after a respawn.