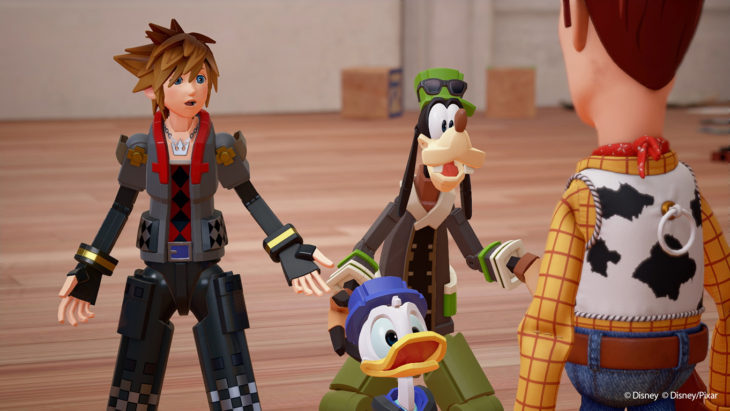 As more and more news erupts from the Kingdom Hearts universe, the third installment from Square Enix is looking to introduce fans to exciting surprises and familiar worlds to explore. The newest Kingdom Hearts III trailer shows off the series’ first appearance in the Disney-Pixar realm, the wonderful and imaginative world of Toy Story.

Taking your cast of Disney/Square characters – Sora, Donald Duck and Goofy – in an epic adventures across the Disney themed worlds, the “forever in development” – and highly anticipated – Kingdom Hearts III is giving players loads of reasons to be eagerly awaiting the game’s arrival. Now, the latest trailer shows off not only gratifying gameplay mechanics, but introduces the cast to some familiar faces from the Disney-Pixar universe.

Woody, Buzz, Hamm and even Rex join forces with the famous Kingdom Hearts cast as they venture off to find their kidnapped toys, and their owner and best friend, Andy. Taken by the villainous Heartless enemies, the newly formed gang of heroes embark on a journey like nothing of its kind.

With an original story separate from the Toy Story films, this new narrative will give fans an all-new experience in the franchise, as well as show off the impressive Toy Story-themed worlds, included with all-new toys, like the Gigas and the Keyblade, which allows the main protagonist, Sora, to perform unique and powerful attacks on plenty of Heartless enemies.

Square Enix not only released a new trailer over the weekend, but in their press content about the game, a short sentence did in fact state Kingdom Hearts III is set to release for the PS4 and Xbox One in 2018. As vague as a release date gets, but at the very least, we do have some sort of date accompanied with yet another new trailer showing off what fans are ever-so patiently waiting for.

Look for more release announcements and news on Kingdom Hearts III all the way up to its release (hopefully) in 2018.