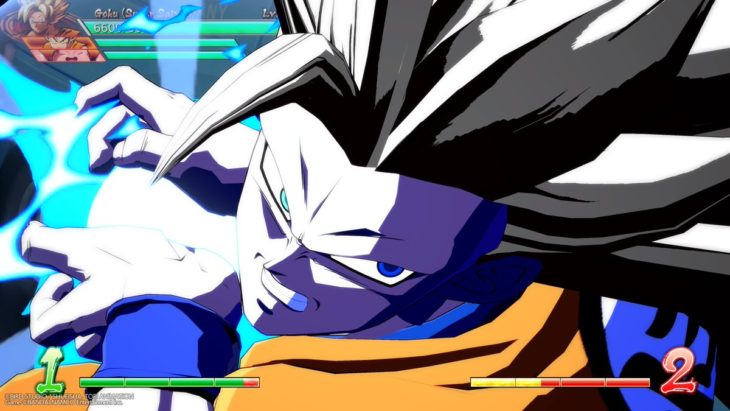 A New Era for Dragon Ball

The Dragon Ball universe has been a staple in the anime community for over three decades now. The gaming world has put out its fair share of DBZ titles stringing together a seemingly endless run of 3D fighters trying to fit the mold of an exciting and fast paced brawler that best suits the popular manga series. Upon taking a break from releasing the acclaimed manga series on handheld devices, Arc System Works has finally given a sincere and hair-raising 2D fighter that the long time fans have been oh-so patiently waiting for in Dragon Ball FighterZ.

The slick stylings of Dragon Ball FighterZ is nothing short of an excellent ode to the intense combat of the long-running television series. Stocked with a diverse roster of fighters featuring the beloved heroes, and infamous super villains stretching across the entire DBZ saga, FighterZ hits the ground running. But the roster is only the start of what makes FighterZ so much more thrilling, so wildly entertaining amidst all of the other main stream fighters out there today. FighterZ takes a nostalgic dip into the powerful universe of the Z warriors, and paints a completely new story to go alongside the new mighty villain, Android 21.

A Deep Combat System Simple Enough for All Players

The combat system comes off as universal and quick to learn, as well as allowing easy incorporating special attacks in battle. All characters follow the same button inputs which allows each character to perform their own unique combos and special attacks. With no designated combo strings to memorize, players let loose their attacks to piece together their own combo chain utilizing the easy-to-use button inputs and most importantly, the super combo meter.

Between the three fighters on one team, they share a super meter that raises with every landed blow. There are seven bars to max out the super meter, with specific powerful attacks taking up 1-3 bars each. The pure excitement of figuring out your favorite fighter’s powerful attacks and combo chains is more than enough to keep the player trying for more unique strings of attacks.

The powerful special attack which takes up three bars of the super meter shows an impressive display of your character’s trademark move, whether it’s Super Saiyan Goku powering up to SSJ3 and unleashing a devastating Kamehameha blast, or boosting Frieza to his legendary golden state increasing his attack and agility. Using the Sparkling Blast technique is another a quick way to engage in a temporary boost of power to help turn things back into your favor. There are different and thrilling special attacks for every character which, in the heat of battle, can greatly help turn the tables.

On top of the special attacks, players can also perform other various attacks, like the traditional tag-team abilities of team assists. Along with stringing together character combos and special attacks, calling in help to either do a quick deal of damage while the player is still in control of their character, or switch team mates entirely while engaged in the middle of an attack. This quick swapping isn’t anything new to the tag-team style of fighting titles, but fits in with the fast-paced action of the Z warriors.

Unravel the Mystery Behind Android 21

The story mode in FighterZ comes in three separate arcs following the story of the newly added character, Android 21. The Super Warrior Arc is first, and takes players on the path of Goku and the Earth saving Z warriors. Second is the Enemy Warrior Arc, and, you guessed it, players now embark on the darker side of the story. Each arc displays different perspectives on the mysterious Android 21, with each revealing a little bit more about the mega-powerful super villain.

The story modes take players though a series of cut scenes that look strikingly similar to the actual anime itself. With no surprise here, it’s like playing through a mini saga of a new DBZ season with exceptionally sharp visuals and spot on voice acting. Between the cut scenes players are greeted with a map full of battles against the invading Z warrior clones. These clone fights act as experience boosters and character unlocks as players progress through the story. At the end of each map a boss battle awaits, typically introduced and ended with story progressing cut scenes.

Without giving too much away, players are stuck in the middle of the Dragon Ball universe where all of the most powerful super villains that our faithful heroes so epically discarded years ago have returned. Cell, Frieza, Nappa, Ginyu, Buu; the familiar faces that were so courageously defeated by the Z fighters are not only threatening Earth once more, but have now teamed up and lead by an all new threatening antagonist. With unimaginable power from Android 21, both the Super Warrior Arc and Enemy Warrior Arc are geared toward putting a stop to the sweet-toothed android.

Throughout the first two arcs players unlock more characters based on the progression which allows swapping of characters for team members when selecting battles in the battle map section. Fighters that take damage during battle are slightly healed after each victory, but keep their remaining health from battle to battle in each chapter. Swapping fighters out when health is low on one or multiple characters is an important tactic to keeping the chapter alive, for if you fall in combat you must start the chapter from the beginning.

Along with new characters to add to your team in the Story progression, various stat buffers known as player skills are awarded as well. Three players skills are allowed to be equipped across the three-man team, each with their unique buff. Adding to your health bar, increasing your fighter’s defense or strengthening the power of your special skills are a few of the performance enhancing stat buffs the player skills add to the battles.

Through the Warrior and Enemy arcs players will learn the basics, beef up their fighters with experience points and what seems like tedious grinding of battling the evil clones. Once the first two arcs are completed, the third most challenging arc becomes available. Taking control of Android 16 and 18 only, this arc takes away the luxury of swapping characters low on health for fresh fighters waiting on the bench. The constant threat of making your way through the clone battles, losing it all on the boss due to low health, and starting the chapter over from scratch is as enraging as it is motivating. The fighting is always a thrill regardless of the outcome, always giving players a new learning experience with each battle.

Throughout the lobby-like main menu, your small chibi styled avatar wanders about the various modes to engage in. Popular Z warriors avatars are unlocked through purchasing capsules with precious zeni earned through completing various challenges and battles. With an even mix of both single player and multiplayer content to explore in the main menu lobby, Dragon Ball FigherZ creates an environment for any type of player, be it casual or competitive.

Single player modes like tournaments, traditional arcade mode, practice and training all sit alongside the story arcs as the many ways to enjoy your time with the adrenaline fueled action of FighterZ. Of course, competing in ranked and casual matches online is the best way to prove your worth in the Z universe. Partake in single battles, or sing up for online tournaments and see where you rank among the best. There are tons to do in this simple yet exhilarating fighting game, but the depth of both the combat, extra content and story mode is enticing enough to continuously draw players back in.

Dragon Ball FighterZ hits the nail on the head in terms of bringing the praised series back to what made the popular manga series so loved in the first place. Fast and exciting action, cut-throat skills, a roster of character hitting every saga of the DBZ series and impressive anime like visuals to help players feel like they’re right in the middle of the Z universe.

Arc System Works captures the essence of their previous work on the Dragon Ball franchise, as well as their other masterpieces – only now bringing over a highly polished and purely entertaining fighter to major consoles. Dragon Ball FighterZ scratches that itch of intense 2D DBZ battles with simplified controls, an excellent combat system and unrivaled action not found in any fighter to date.