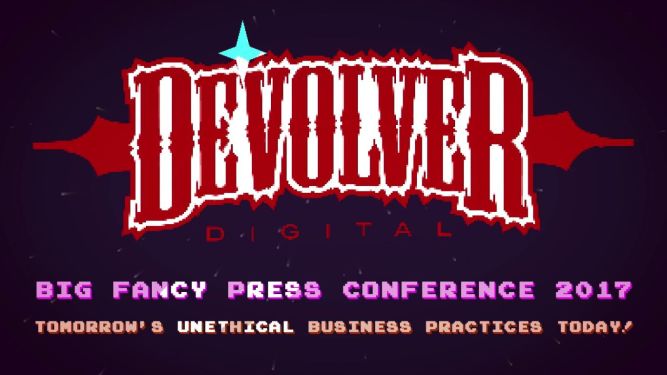 Devolver Digital is known for their previous negative comments about E3 and this year, the publisher took it to the next level. They bought a slot at E3 to parody the event which has resulted in one of the most memorable press conferences ever created. Here’s everything you need to know about this magical experience of a press conference.

For those who missed it, Devolver Digital held a press conference after the Bethesda one yesterday. However, it’s not the type of press conference that anyone expected. The publisher ran a parody show which pokes fun at the biggest trade show in gaming. And it was glorious.

Anyone who missed this amazing stream can find it on the Twitch VODs once the post-show ends.

As promised, the publisher had no new games or gameplay to show. Games weren’t even the main focus of the show. It was a pure comedic sketch filled with hilarious and ridiculous things that was enough to make fun of almost every press conference at E3. The ‘conference’ is the complete opposite of what E3 is but it seems to be exactly what E3 desperately needs to keep it fresh and ensure that viewers are rolling on the floor laughing.

Two game trailers were shown during the event but they aren’t new ones. Both of these trailers have been around for several months now.

The conference was filled with comedic sketches which poked fun at different features which developers are pushing right now. Such as “Comment Created Content” as a mock replacement of modding.

Devolver Digital didn’t have a long press conference but it certainly ended explosively! The ‘conference’ has been followed by a post-show called the “Pre-Pre-Show” which is yet another parody show. This time, the publisher is showing a range of games which are all actually ‘fake’ or aren’t being published by them.

The conference was a great addition to E3 this year. Hopefully the publisher will consider coming back for a another show.