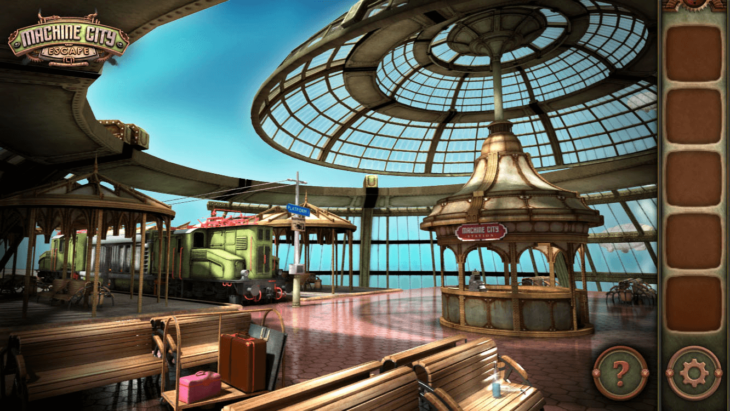 Different variations of puzzle titles grace our video game devices weekly, and for years a few of these titles stood out from the rest of the crowd. The new title releasing on mobile devices titled – Escape Machine City – is looking to be one of those titles this year.

In the semi-free game you’ll be tasked with puzzling challenges in attempt to escape from a city rapidly falling towards ultimate destruction. Escape Machine City gives the player a unique spin on 3D puzzle solvers, while taking the genre to the next level with stunning visuals based around an extraordinary city made entirely from machines.

The desolate city sits upon a cliff side facing the end of its life-cycle above solitary wastelands. As the town inches closer to elimination, you’ll take control of the last person left behind. With time ticking down to your inevitable demise, you’ll do whatever it takes to escape the dreary city run by machines, and solve any puzzles, mechanisms or any other brain flexing challenges that stand in your way.

The game plays host to 15 different levels, while players can receive the first 8 for free. Throughout the involved storyline players will explore beautiful 3D level graphics through a barrage of intricate and riveting machines that seem to run the entire land of Machine City. Through dozens of quests and puzzles, Escape Machine City is full of exciting gameplay. Scattered across the game are over one hundred different collectibles and items to keep the game from souring soon after its launch.

An enticing city run by machines, and one person left behind to fall and die with the metallic city. Complicating and diverse puzzles mixed with a unique setting and gorgeous art style, Escape Machine City is the escape room title that is looking to deliver a title not forgotten by those who indulge.

Look for Escape Machine City on Android and iOS devices with the first 8 – out of a total of 15 – levels free to play, available now.