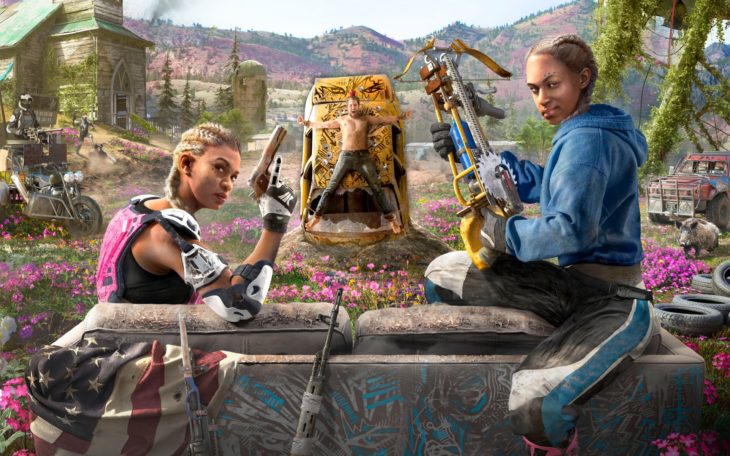 Returning To A Revisioned Hope County

The Far Cry series has introduced players and fans to interesting characters, worlds and stories throughout its ten-year plus tenure. With Ubisoft’s latest entry in the series with Far Cry New Dawn the studio dipped into the post-apocalyptic world for the first time, in turn allowing the experience to branch out into uncharted territories not typically found the traditional Far Cry formula. However, New Dawn doesn’t present and entirely new experience, finding itself stuck somewhere between an overdone recipe and tantalizing new horizons that have yet to be fully realized within the series.

Check out our video review of Far Cry New Dawn below:

Over the years the Far Cry franchise has teetered its nimble legs on explosive first-person shooter adrenaline, open world exploration, subtle RPG elements and archaic scenarios. The mix of these elements were a breath of fresh air at first, but after so many releases following the same pattern with very little to show in the way of differences, fans are eager to see the series take a much more drastic turn. Far Cry New Dawn – which is a direct follow-up to 2018’s Far Cry 5 – presents a completely new setting for the Far Cry series, marking the first time players are able to dive into a post-apocalyptic theme within the Far Cry universe. While there’s plenty to like about New Dawn, it seems as though the team behind the beloved series is tip-toeing into new features presented in the formula, rather than taking one big leap into making the Far Cr experience significantly better than what it’s ever been before.

Far Cry New Dawn takes place some seventeen years after the ending events of Far Cry 5. After the bombs fell upon Hope County – and we’re assuming the rest of the world – players take on new characters looking to do their part in bringing some tiny portion of piece back to the troubled, yet vibrantly colorful wasteland. Anarchy has essentially reigned over the destroyed Hope County, and the ones who can be found at the center of all of the chaos are the villainous raider group, the Highwaymen. The Hope County family is led by the disturbingly clichéd twins – Mickey and Lou – and players must partake in many familiar adventures to take back their county – but may also find a glimpse of some exciting new features that could bring the casually floundering series back on its feet.

Previous Far Cry players will notice the familiar tight gunplay and vast exploration within New Dawn, but will also notice a few changes. Taking another step into the RPG sector of games genres, enemy health is now displayed in health bars above their heads, come in a variety of different rank levels, as well as the weapons coordinating in ranks in similar fashion. There’s a lot more linearity to New Dawn when compared to the open-endedness of last year’s Far Cry 5, which might be a bit off-putting for those expecting the same opened structure. However, the more linear approach works well, as players must now work their way up the ranks by crafting higher powered weapons in order to take on more exciting areas of the map. It’s the anticipation of moving onto deeper regions within the map that drive players to explore and upgrade as much as possible.

As stated, players will find themselves exploring and scavenging for numerous crafting resources. Players will find various materials scattered throughout Hope County with tons of locations on the map holding a specific number of certain crafting materials that act as collectible locations rather than randomized discovery. While this most certainly seems like it makes for a much more scripted approach to exploration, it also creates a much neater method of “cleaning out” Hope County for as many materials as possible.

Home Is Where You Make It

Players can carry quite a bit of crafting materials on their person, from rolls of duct tape to gears. Each material is used for specific items within the incredibly simple crafting mechanic. At either liberated outposts (yes, those are still a staple within the Far Cry universe) or the larger home base settlement of Prosperity, players can utilize various crafting benches to construct new weapons, ammo and vehicles. Different ranks of crafted items help create a sense of progress, as well as the other various upgrading mechanics in both the wide open world of Hope County, and Prosperity.

Within Prosperity players will find a slew of different assets that will help them on their journey. There’s different branches to Prosperity, each specializing in different gameplay features and mechanics all with their own unique upgrading system. Each specialized area may be upgraded which offers more options, ranks and unlockables for the player. The weapons area may be upgraded to allow for higher ranked weapons to be crafted, while upgrading the training grounds will enhance your companion abilities. Upgrading your garage provides better vehicles to craft, and the medicinal garden offers stronger health packs and other various enhancements.

A World Outside of Hope County

Along with all of the usual gameplay features that have always found their home in the Far Cry universe, there’s also some interesting new features sprinkled in the mix as well. Expeditions are new to the series and invite players to complete side objectives in areas around the world outside of Hope County. Players will be dropped off via helicopter support in areas like the shores of Florida or the western States, with instructions to retrieve valuable supply drops and escape the rush of enemy reinforcements upon your evacuation. Expeditions are a surprisingly fun addition to the Far Cry formula, and with the ability to take players into different, though small, regions outside of the main map – I’m hoping there’s a future for this new addition in the series.

Players will also find that the companion system is back in Far Cry New Dawn, allowing some new and old faces to make an appearance in the postapocalyptic world. Of course, players must complete a specific mission in order to recruit each new companion – including our beloved four-legged companion(s) – but it’s still a welcome return to the series. And much like Far Cry 5, online co-op makes a come back in New Dawn and continues the exciting online component.

New Dawn creates a similar formula for the Far Cry series with the main course of missions of taking out Hope County’s antagonists, Mickey and Lou. Of course, there are plenty of side objectives in relation to recruiting companions, scavenging in high loot areas and other endeavors such as the new Expedition objectives. There’s plenty of discovery to be had in terms of upgrading your character in crafting using found resources, but personal progression is still found in the series’ familiar skill tree. Crafting high-end weapons to fight your way towards more dangerous – and rewarding – areas of the map does manage to create a more organic feel to progression, and finds itself quite welcome in the Far Cry formula.

Far Cry New Dawn takes a step in the right direction when it comes to resurfacing an over decade long series. Easy to learn crafting mechanics, excellent scavenging of a lively world and engaging missions that take players through a variety of settings makes for an exciting, yet familiar experience. There’s an essence of appreciated series growth within New Dawn, but ultimately boils down to “another Far Cry game”.

Anyone who is familiar with the Far Cry formula will find themselves at home with Far Cry New Dawn. There are plenty of subtle adjustments to the gameplay, but also includes some new and enticing features that has the potential to keep the series from stalling out from a stale mixture of tight shooter mechanics and vague RPG elements. With New Dawn, it seems the series is slowly lifting itself out of the recesses of gameplay monotony, but at a snail’s pace. There is tons to enjoy in New Dawn if you’re happy with the way Far Cry titles have presented themselves over the years. But if you’re looking for something to massively overhaul the often tired experience and take advantage of the tremendous potential within the Far Cry universe, unfortunately New Dawn comes up just a smidgen short of breaking that barrier into greater, and greener (pinker?) pastures.