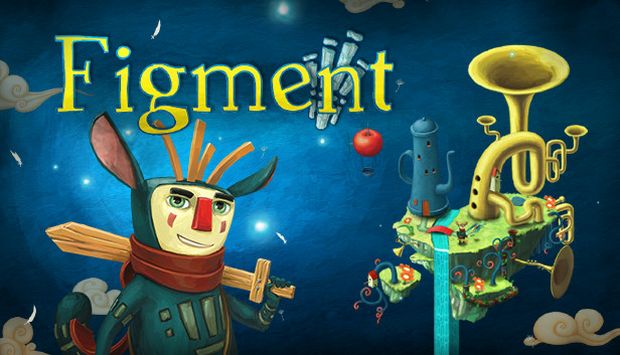 Chase Your Nightmares in an Awe-Inspiring Musical Adventure

Exploring the depths of a troubled mind in the new indie puzzle/adventurer, Figment, the player is thrust into a wonderful and clever song and dance adventure full of fragile thoughts and dangerous nightmares. Spilling over with witty off-colored humor, unimaginable worlds and a lovable, bickering duo, Bedtime Digital offers an experience presented in charming hand-drawn graphics, bolstered with a lovely musical score.

The Creative Team Behind Bedtime Digital

The third title released by the indie developers out of Denmark, Bedtime Digital has worked endlessly to create a proper studio dedicated to bringing unique experiences to the video game community. Earning their official studio name and the birth of the beginning of something great in 2013, Figment is their latest masterpiece, and one that shows off the talent found in the young team of developers.

With Figment, the team takes players on a journey facing off against wicked nightmarish creatures in a bizarre world, created from the troubled mind of a depressed man. Conquering your fears and retrieving your memories will require an eager mind, ingenious puzzle solving and the help of the dynamic, squabbling pair of thrill seeking – and rather dry humored – charlatans.

A Puzzling Trip Through the Depths of Nightmares

As Dusty, you’re off to stop the fiendish enemies dwelling deep in the complex mind. In this fantastically designed world – partnered with the chipper and talkative bird, Piper, the duo embarks off on a remarkable story told in a charmingly haunting and mesmerizing style. As you progress through the left and right sides of the mind, Dusty and Piper must traverse across creatively inspired puzzles amidst dreamlike lands.

The game opens up with a simple run through of the basic gameplay mechanics. Running about the 3/4 isometric viewed lands, you will encounter various key objects to pick up and place in the proper locations to help solve puzzles. The game always seem to make great adjustments in pointing the player in the right direction, one puzzle after the next. There’s a constant feeling of continuously progressing further only held up by the trickery and patience of the many riddles throughout the story.

Finding and placing elevator platforms, a handful of different colored synapse batteries, trumpet keys, giant bottle openers and seedling sprouts are only a few of the random objects found in Figment that help push the game forward. Many different objects and game changing elements in the game are powered by the colored synapse batteries, in turn triggering more puzzle mechanics. Using powered windmills to blow poisonous fog from certain paths by turning a crank handle – which may need to be found in the level as well – in the appropriate direction, or pushing the “Train of Thought” across the many pathways in the logical left side of the mind, are only a few examples of what Dusty and Piper must get themselves into in order to fight off their fears.

One instance will have the duo searching the creative right side of the mind in search of missing trumpet keys. Once all keys have been found – after a trial of musically themed puzzles – the accordion bridge stretches across to allow access to further levels in the game. The game is set up all across the campaign in this similar fashion. One large puzzle will push Dusty to other smaller puzzles in order to push through the story. Whether you’re sticking rotating cogs and gears in the correct order of a complex machine, pressing highlighted buttons in order so they all light up the same color at once, or finding and matching the correct piano chords to coordinate with corresponding colors, you’re sure to find a variety of intriguing and mind-bending puzzles throughout Figment.

Throughout the adventures across the mind chasing down the fiendish nightmares, boss fights will sporadically begin, seamlessly blending into the normal gameplay. The music kicks into high gear and the bosses begin to taunt Dusty and Piper with catchy and adorably amusing rhymes themed with their appearance. The eight-legged giant spider sings about webbing you still and crawling all over you while you sleep, backed by an ever-present melody.

Moments like these are scattered across the game and leave the player with more than a few delightful smiles. The well-written verses leave the player purposely taking their time on the boss fights, just long enough to finish out the rest of the lyrics. Where Figment truly shines is the resonant, and “dreamlike” soundtrack that joyfully haunts the player during the entirety of the game.

The game revolves around you chasing after 3 primary nightmares: the poison spitting varmint, the giant, sly spider and the thieving dark nightmare monster responsible for stealing your memory scrap-book. Each with their own settings and themes, you’ll find tons of riveting puzzles, as well as fight off the minions of the three bosses along the way. A simple swing of your sword keeps the combat itself pretty basic. However, different techniques begin to surface with each baddie, and other useful abilities like the roll away dodge, along with the power up swing accomplished by holding down the attack button for a couple of seconds and releasing, bring variety and a little more skill to the table.

A World Full of Memories

Unless a seasoned gamer relentless upon taking absolutely no damage, you may find yourself low on health. Throughout the world of Figment green healing orbs circle random stationary objects, most notably found where combat takes place. You start out with about 6 hits of damage before collapsing where you stand. Upon death, Dusty starts back at the most recent checkpoint, usually not far from where you perished.

White collectibles, or known in-game as endorphins (Mmmm, endorphins), act sort of like experience points, in the way that they boost your overall health meter. After collecting a hefty amount, the endorphin meter fills and Dusty is awarded another health slot to increase the amount of damage taken.

Figment isn’t just full of health items and key puzzle items to collect. Old memories of the actual protagonist (the man’s disturbed mind you’re inside of) are littered across the different sections of the mind. Collecting these reveal simple pictures along with a short quote directed towards the man, coming from someone whom the player has not made a connection with yet. These little hints of memories tease the player and act as fuel to discover the truth buried in the depths of Figment.

Fending off against your greatest fears and recovering the lost memories of a depressed mind comes off as no enjoyable feat. Figment, however, takes these precarious thoughts, twists them into amusing foes equipped with captivating song-and-dance numbers and shoves a one-of-a-kind, truly stunning masterpiece into your hands. Like something born out of a grim nursery rhyme, Bedtime Digital delivers an experience worth reliving over and over again.

Turning your terrors into charming and creative monsters, bringing the complexities of deprived and elusive thoughts into lively, diverse puzzles, and doing so in hypnotically cryptic fashion is something that Figment tackles almost effortlessly. With one rhythm inducing line after another, a narrative overflowing with whimsically dry dialogue and a casual but gratifying approach to isometric adventures, Figment is more than just a dip into the imagination; it’s a refreshing wave.