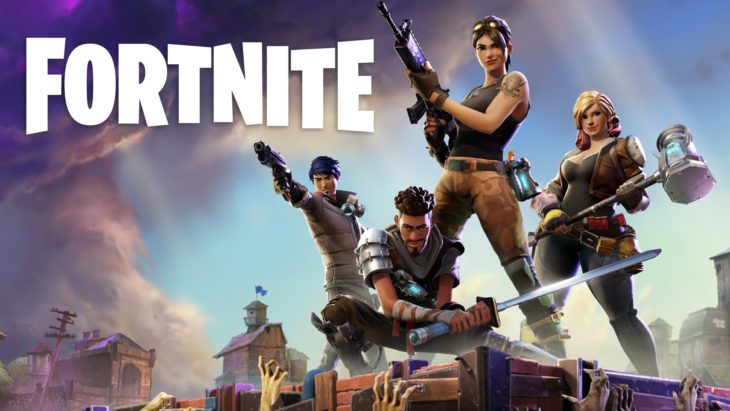 – has made monumental strides in the expanding genre. Multiple modes, weapons and abilities accompanying various team and cooperative play provides gamers with an outstanding online free-for-all experience, but the Battle Royale mode is what’s taking the community by storm.

The developers at Epic Games, and the team that make up People Can Fly Studios, have put their own twist on the rising competitive genre of battle royale gaming. Made from a massive success that is the impressive Unreal Engine used by Epic in other titles, PCF have been developing the full game of Fortnite for well-over 5 years. While the free-to-play Early Access version includes only Battle Royale mode, the rest of the game will eventually be added to the free-to-play list sometime in 2018.

Choose Your Own Path to Victory

Upon entering the vast and strategic world of Fortnite’s ‘Battle Royale’, you’re main objective is to be the last man (or team) standing in a heated 100 player match. Set in a massive sandbox map, littered with various settlements, strongholds, neighborhoods, on top of loads of other areas to explore, the world is yours to manipulate to your liking. But first, you must drop into the world via a literal sky bus soaring over the map, which leaves the player with a tactical approach to entering the battle royale ring.

The giant school bus equipped with a hot-air balloon set up on the roof randomly spawns at one end of the map at the start of the match, coming in at any number of directions. You have roughly a minute to decide where you wish to leap out and begin your trek and domination in the dangerous and intrusive lands of Fortnite. Jumping out early will give players an advantage of gearing up, gathering resources, constructing a base, or just a head start in heading towards the primary battle zone.

The entire match will begin to focus on narrowing down the traffic areas, condensing the map every couple of minutes. Typically the majority of gunfights occur closer to the middle areas of the map, so jumping from the bus halfway through has a better chance of landing you right in the hotspot of gunfire. Alternatively, there are tons of hideouts and buildings to scavenge scattered throughout, so picking an initial target for essential equipment becomes your number one priority right off the bat.

Once landed, you are equipped with a trusty, indestructible pickaxe. Using this tool as a weapon is handy in a pinch, but provides little damage points, and dangerously close combat range. The main objective when using the pickaxe is to gather construction materials, simply by destroying anything that stands in your way. Walls, buildings, boulders, trees and any other obstructions you can find are completely destructible and provide useful materials to help you, or your team, build the ultimate fortress, bridge or whatever it is that may give you the advantage in battle.

Ranging from stairways and ramps, walls, floors to deadly traps equipped with radius sensored triggers, the option to construct to the world around you provides a unique and strategic approach to the online gaming world. Whether its building the ultimate fortress with a dozen rooms and a maze of traps to keep your enemies at bay, or to simply smash your way into a house to save time, the pickaxe becomes a go to for treasure hunting and material gathering.

Before long you will inevitably run into some ammo, weapons and R&R items. Limited by a specific number of inventory slots, you’ll need to configure your items to the best of your ability. Guns won’t last you forever, and ammo can run out quick if you make a lot of contact with other players, so having backups is a huge tactical advantage. Gathering health and armor items are just as important for survival, sometimes leaving difficult choices of which item to keep, and which to discard.

The weapon selection is as basic as standard shooters go, from pistols and revolvers, to pump-action shotguns and long-ranged sniper rifles. Assault rifles, SMGs and, of course, panic inducing rocket launchers may also be discovered throughout houses and bases scattered across the map. Upon losing health from your health meter – bandages, med kits and armor potions are strewn about the entire map, to give you a dose of relief after tough-nosed battles.

The bandages replenish a small portion of health, while the med kits provide you with a full recovery. Armor potions are found and will fill you armor meter up halfway upon drinking them. While holding the action button down, your player will down the potions or apply the bandages in a timely fashion. During this period, your player is unable to move very many paces before aborting the healing process, so finding a safe spot is crucial for staying out of the line of fire when patching yourself up.

Guns and ammo seem to be located in relatively convenient locations all over the enormous map. Bandages and other R&R items, at least in my experience, are much more rare to stumble upon, making the element of surprise, and avoiding all-out gun battles a vital strategy for victory. Crouching, long-range sniper rifles and high vantage points, no matter how you get there, are excellent tactics for gaining the upper-hand in battle.

Building the Ultimate Fortress Amidst a Looming Threat

Constructing in the midst of battle is a huge asset to help benefit you or your squad towards victory. Using materials like wood, metal, concrete and brick, you’re able to build barriers, pathways and forts for extra protection, or perhaps laying traps to lure unknowing players. Adding extra threats like retracting spike floors or electric ceiling zappers, among many other traps, help add defensive tactics to your fortified base. Depending on where you set up shop, however, the deadly “storm” continuously closes in on the focused area of battle.

The longer the match goes on, the looming threat of a raging storm gradually narrows the battle range. The map starts at full capacity, revealing the entire map, but countdown timers warn the players of the dangerous threat surrounding the map. As the timers continue to tick, the radius of battle shrinks, and any player caught outside of the ring – in the “storm – begin to lose chunks of health every second. This method helps prevent players from “camping”, as well as condenses the battle area as more and more players inevitably begin to drop off. Players not only fight for themselves and against other players, but are continuously driven towards the focal point of heated battle.

Battle Royale in Fortnite provides excellent online strategy in a fun and exciting manner. By using a huge interactive map, and a ton of online players in one match, Fortnite provides great use of battle tactics, teamwork, intense multiplayer action and interesting methods and abilities to survival. The use of gathering materials and building on a whim creates unique and sometimes outlandish methods in conquering over your enemies.

Fortnite gives fans of online battle royale an interesting take on using precise shooting, intuitive battle strategies, easy-to-learn gameplay mechanics and a wide range of scavenging throughout an immersive battleground. While the genre of battle royal is just getting started amongst the gaming industry, Fortnite is helping to shift the tide of the expansive every-man-for-themselves approach in online gaming.

, released on the PS4, Xbox One, PC and Mac systems available now.