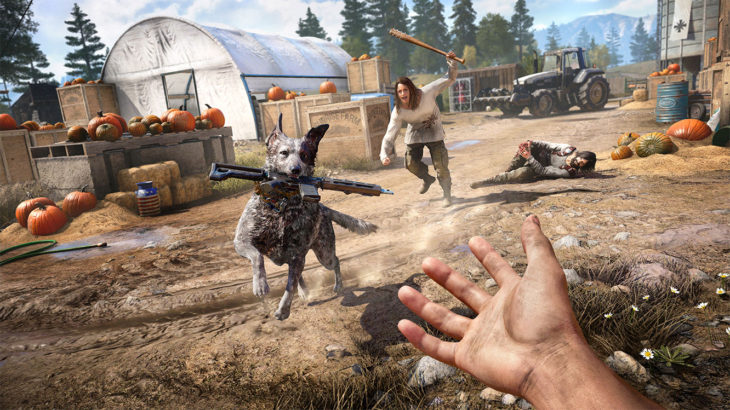 Ubisoft is a modern giant when it comes to the expanding world of video games. With their star franchise, Assassin’s Creed, gearing up for yet another massive release in Origins, there’s still big name titles releasing from the global developers just a few months later, one being Far Cry 5.

The Far Cry series has taken players on unforgettable journeys capable of driving any ordinary person to the brink of insanity. Facing off against crime lords, local gangs, wild animals and memorable characters spread across vast exotic islands and landscapes, Far Cry 5 looks bring fans to the homely countryside of Hope County, Montana USA. What we know about the game is, you’ll be opposing a gang of cultist crazies lead by a deluded cult leader, opening up the truths about the wild lands in the solitary mountains of the northern states.

Other details have become available as various demos and preview sessions have been underway. Most recently, PCGamer sat down with a preview of the game and revealed many new features the new entry has to offer. From the new addition of companions to the savagely enhanced repair tool, there are a – at the very least – few minor touch ups added to the series awaiting gamers come early 2018.

Gameplay features will be taking off with the companion addition as your canine friend digs his paws in, fighting tooth and nail by your side. Whether opposing humans or wild animals, your dog companion snarls, shows his teeth and even carries the audacity to turn away wild wolves in despair. In addition to the fearless pooch’s stance on territory, your four-legged companion is also undefeatable, including invulnerable to fire, which if anything like the other titles in the series, may happen a lot..

Other small features pointed out include ultra precise air strikes, which may be called out from the ground in any location, and the airman, Rye, will hit the target directly on point. Another viable, but patient and strategic approach to further ever-going onslaught is the new addition to a hijack crop harvester. Slowly mowing through fields is not the most efficient method to staying alive in the dangerous lands of Montana, but in a pinch, who knows what could save your life.

A handful of trailers, an intriguing, offbeat setting with an antagonist to back it up and a small taste of minor features to, once again, set itself apart from the rest of the Far Cry series, Far Cry 5 is looking to give players a new sense of freedom. Sandbox games are becoming, more or less, saturated in the gaming industry; Far Cry 5 is looking to change that on February 27th 2018, when it releases on PS4, Xbox One and PC.