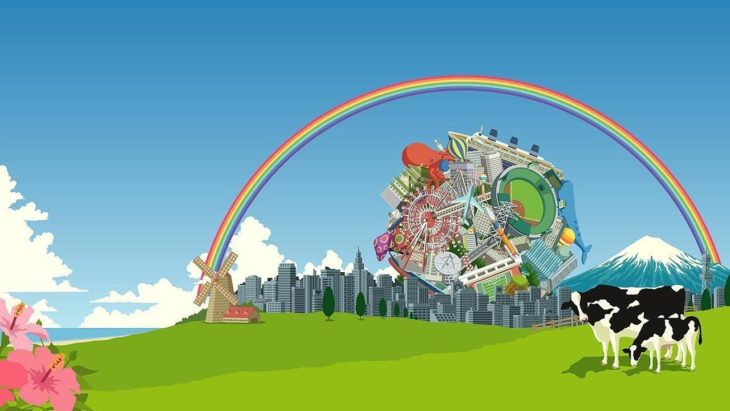 Over the past couple of weeks we’ve discussed why particular games give us a strong emotion of joy. Focusing on the aspects and features in these titles that strike these glorious feelings of casual happiness, for part three we’ll relish in the colorful and imaginatively bizarre world of – Katamari Damacy.

Rolling about your giant ball of creativity, the original Katamari Damacy released in 2004 on the Playstation 2. The game focuses on using the analog sticks (and that’s it!) to move your character around while collecting every last object you can. The bigger you Katamari ball gets, the larger the objects are you can pick up – eventually turning your collection of random objects into stars. Each world has different themes which include tons of different objects and characters to collect.

The game has a joyous atmosphere even considering the ruin of the stars, moon and constellations are on the brink. Simple controls of guiding your analog sticks around colorful and happily animated worlds doing nothing short of bringing absolute wonder and peace of mind. As you start off in the worlds your goal is crystal clear: to roll up anything and everything into your magical “sticky” ball – which literally grabs anything that will help it increase in size, allowing you rolls gather everything in a timely order.

The sounds and songs that ring on as your timer slowly ticks down, rolling away your stress with an easy and un-complicated title. As you start off with simple, smaller objects, the moment when your Katamari ball is so big you’re able you satisfyingly pick up larger and larger objects that may have stood in your way before is something die-hard fans happily remember.

Easy and simple controls aren’t everything, and the majority of gamers are looking for something that brings a little more, “oomph” to the table. While Katamari Damacy doesn’t require demanding mechanics, a rich and authentic story or survival in barren wastelands, it does give players a relaxing break from the tedious and sometimes stressful titles we see time and time again.

Katamari Damacy provides relentless fun and enjoyable gameplay features not found in any other title. No other game has come close to even attempting something as bizarre as this title, but that may be for the better. With plenty of trying, frustrating and controlller-ending games cluttering game shelves everywhere, it’s nice to experience a title so casual, so full of joy and intrigue to help render the hardships of modern gaming.