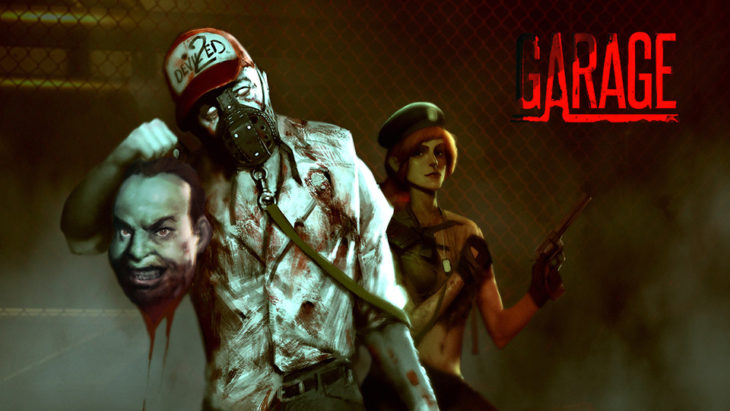 The Only Way Out is Down…

Reviving the lost art of 80s B-movie horror films, Garage on the Switch places players directly into a blood-bath of mayhem and turmoil. The unique top-down camera perspective helps provides a gritty feeling of lost confusion and unrelenting hesitation through every kicked-open door. Once accustomed to the mildly frustrating control scheme, Garage becomes a grim adventure game full of grizzly carnage and a surprising amount of monster slaying fun.

Garage brings along another undead shmup to the already broad selection of both indie and mainstream games available, but does so in an overwhelmingly gripping fashion. The dark, dank underbelly of the deserted parking garage proceeds deeper and deeper and it’s up to our hero – Butch – to put a stop to what ever is going on between the layers of the cursed structure.

Playing as a drug-dealing lowlife, Butch awakes to the shocking surprise of coincidental memory loss. With no memory of how he became trapped in the dark and bloody parking garage, we do as any other 80s horror survivor would do: Proceed further into the depths of the undead labyrinth in hopes of securing a way out and surviving this dreadful night.

The old school visuals scream 80s aesthetic while the gameplay compliments the style ever-so nicely. Players begin the first couple of chapters by going through levels introducing them to the basics of combat and crucial exploration tactics, such as kicking in doors and busting through cracked walls. Players will come across a good deal of hidden areas throughout the parking garage, as well as plenty of locked or chained passageways which can be easily broke with the right weapon.

However, soon enough players will need to arm themselves to defend against the diverse array of undead enemies and rodents. While your straightforward melee punches and kicks will increase your odds of survival early on, players eventually begin discovering the various firearms and other deadly weapons help add a bit more flexibility to the tactical combat. Which is great, because kicking away at the scurrying rats may give you the most fits early on with a miniscule hit box forcing players to recklessly kick away before being mercilessly slaughtered by blood-soaked rodents. Good times…

Related: In 2018, Which Gaming System is Right For You?

Aside from the irritating rat-fest, it won’t take players long to adjust to the twin stick aiming methods to better lay waste to forthcoming enemies. As you proceed further into the depths of the garage you’ll begin to unravel more clues about the destroyed and abandoned garage, as well as the devious minds behind the undead carnage occurring. Each level requires more and more survival skills from our hero, eventually leading players to full-fledged boss battles – some of which may remind you of familiar horror legends significantly boosting the entertainment factor.

Fending Off the Cadavers

Deeper and deeper into the garage things begin to get more grim and much, much bloodier. Every new room opened has a high risk of throwing a handful of charging ‘cadavers‘ – as they’re known within the game’s world – further painting the rooms a stark and messy red; which is excellent when attempting to pull of that violent 80s horror ‘feel’. But, what comes with positive strides in gameplay and appearance introduces other issues within the game’s performance.

There seems to be a distancing problem leading to some rather undesirable and often frustrating moments. Enemies and objects won’t appear on your screen unless the player is a specific distance away. Now, the problem isn’t necessarily the random disappearance and reappearance of crucial health items and ammo, but rather the charging cadavers vanishing suddenly only to reappear directly in front of you. It would be one thing if the enemies halted their movements after the player moves out of range, but dealing with the vanishing issue often felt as though I was up against a pack of teleporting zombies. It’s never seemed like too big of an issue to where I couldn’t overcome and proceed further, but a fix to this bug would make the game a little more approachable to the casual gamer.

As you plunge further downward the game begins to open up, as well as the story. You begin to interact with other story-related characters pushing you to continue this dangerous journey to what you hope leads to freedom. The levels start off conveniently linear at first, but soon begin to expand into broader areas requiring the player to explore their surroundings a bit more cautiously. Finding keys and key items will have Butch discovering the many secrets of the mysterious garage he so desperately wants to escape, but sober to the fact that his only way out is down.

Discovering the Hidden Secrets of the Garage

As mentioned, the levels do begin opening up for lengthier exploration, but with the lack of a mini-map (or any other type of map) players can easily lose themselves after a solid amount of time exploring a level. Now, leaving out a map feature definitely adds to the survival aspect of the game, but also increases the annoyance of losing your place or forgetting where a certain locked door was. That being said, Garage does a fairly decent job of designing the levels to where each path typically leads Butch back to his correct destination.

While exploring the underground cadaver infested garage is a cautious and tactical operation, there is also a few instances when engaging in hallucinogenic drugs is the most viable method for discovering hidden areas. At certain points in the game Butch will consume various medications resulting in a trippy blend of 60s counterculture vibes and swirls of neon colors. These occurrences aren’t only for the looks, but they also point out specific weak points or cracks in the walls leading to secret paths not seen by the sober eye. An interesting mix up within the game’s gory atmosphere but never seems to fit in with the 80s horror theme.

Throughout the game players will begin to pick up new weapons, such as your standard pistols, shotguns and uzis, as well as a helpful amount of ammo boxes. Health items like medkits, candy bars and various drinks for boosting your adrenaline to produce stronger melee attacks can also be found, and, of course, the occasional bullet proof vest. Various missions will have players searching for random key items, and often keys for locked doors, leaving an even balance of zombie combat and exploration.

Garage immediately feeds off of the quirky-ness of that classic 80s VHS horror movie ambience borrowing gameplay mechanics from classic games of the same era. The top-down perspective is something we see often within the realm of indie game shmups, but settles well with the grittyness of Garage. Though very niche in play style and theme, Garage redeems itself from the rough performance issues and awkward gameplay elements the more time you spend heading deeper into the secrets of the mysterious parking garage.

While the game’s combat seems familiar to any twin stick shooter fan at first, the clunky method of kicking rats might be enough to rage quite rather abruptly. The lack of a map shouldn’t hinder anyone looking for a rewarding survival experience, but not for the adventurers who may find themselves easily losing their way. The story starts off uninspired and cliché, but soon begins to originate in a decently compelling narrative between some interesting characters. While the small performance issues may lead to some unsavory moments, they’re usually pretty easy to adapt to. Garage is a worthwhile title for those looking for the bloody thrill of gore and carnage, but otherwise better left to the players looking for a unique, and often punishing, survival experience.