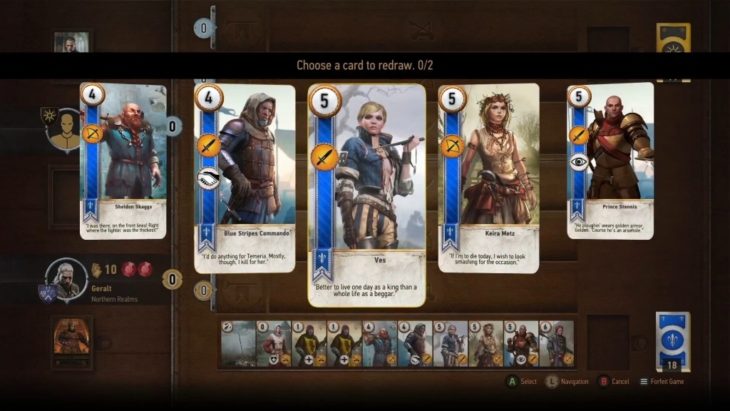 Let’s face it, Gwent is a fun mini-game in a brilliant game. Playing Gwent with people can give you options to unlock additional options to finish quests in The Witcher 3. But imagine for a moment that Gwent is not a fun game to play. Instead, it’s tedious and dull. How much would this subtract from The Witcher 3?

While you don’t need to play Gwent to progress through the game, there are plenty of achievements related to it. There are also some quests that can only be completed by playing Gwent. So if you’re someone who likes to try and 100% complete games, you’ll need to play Gwent. So it’s a good thing the game is interesting otherwise it would be seriously tedious and annoying.

If Gwent was bad, it would make trying to complete the game a few unpleasurable experience. Players would be forced to trek through hour after hour of a dull card-based mini-game which never gets any more interesting or fun. How would this affect how we see The Witcher 3 overall?

Well, games are typically marked down if a segment is dull or tedious. So we can assume the same thing would happen to The Witcher 3. The game would be marked down, as a result, this incredible game would probably have its many “Game of the Year” awards taken away.

So The Witcher 3 probably wouldn’t have been so highly rated and many of us would have become bored of the game. Or at least, many more people would have as I didn’t personally enjoy The Witcher 3 very much… it felt a bit too overhyped for me.

In the end, it’s a very good thing that this mini-game is a pretty entertaining card game in The Witcher 3. If it had failed then it could have dragged the rest of the game down with it.

Would you have played The Witcher 3 through to the end if Gwent was tedious and dull? Let us know your thoughts!