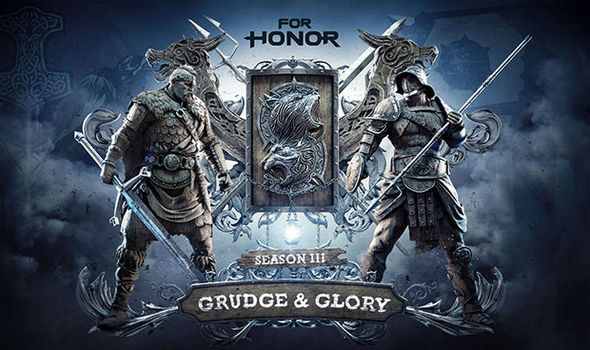 Ubisoft has announced the two new heroes which will be joining the fight later this month. This upcoming season is the biggest one the development team has ever created.

The aptly named “Grudge & Glory” season will be arriving on August 15th for PC, PS4 and Xbox One.  The biggest additions with this season are the two new heroes. However, there’s also quite a bit of content coming to the game.

The Highlander is from the Viking faction and is a Hybrid character. They are able to switch between two fighting forms: Defensive and Offensive. Their defensive  form allows them to perform counter attacks and parries however their offensive form allows them to perform powerful attacks. When in the offensive stance, they will be unable to block. On the plus side, they wield the heaviest and longest sword in the game which gives them devastating strength over a long range.

This Knight fighter wields a trident and shield and is the first class in the game to use a trident as a weapon. These Assassins use very little armor which allows them to perform incredible maneuvers. They also come with the ability to punch enemies to stun them a short moment. Compared to the other classes in the game, they have a larger stamina meter and reduced cool down times allowing them to perform more combos.

Two new maps are being added to the game with this update. The Sentinel and the Viking Village.

The first map is a ruined castle that still has one large tower standing. In addition to this, The Sentinel comes with a Ballista which is usable so players can attempt to shoot each other with it.

Viking Village on the other hand which “really captures the feeling of that Raider’s Viking village in the North”. It’s set on the edge of the water in a small cover. However we don’t know very much about this map just yet.

Hopefully, Ubisoft will reveal a bit more about these two new maps ahead of the release this month.

Ranked is officially coming to For Honor in Season 3. There will be a 1v1 duel tournament coming to all platforms with the launch of Season 3. However, there’s also a 4v4 ranked mode coming in the future. There’s no release date right now for this 4v4 ranked so we’ll have to wait a little while for this.

It looks as though the developers are looking to cultivate the competitive scene for the game by adding ranked for the first time ever.

The max ‘level’ for all heroes will be raised another 10 levels so players have more growth room at the high levels of play.

This new addition is coming mostly for players who have completed their heroes already. There will be new visuals and armor coming with this update to further customize the heroes in the game with new looks and statistics.

In addition to all of this, more gameplay adjustments will be coming to work on the balance for the game. Testing will continue throughout the duration of Season 3 and beyond to ensure the game remains balanced with the introduction of new heroes.

Ubisoft has announced that they will be showing more content from Season 3 later next week on the 12th. WE don’t know exactly what they’ll be showing but there will be a livestream event at 11am PT. For now however, you can see everything currently announced in the trailer below.