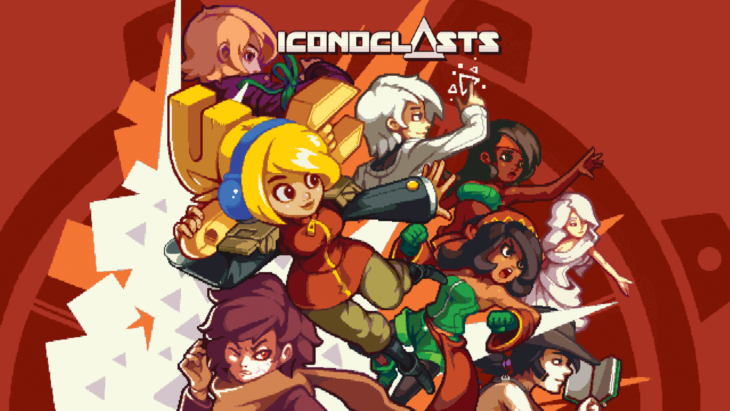 Iconoclasts ventures into the realm of retro-inspired 2D adventure tiles with bits of other genres sprinkled in. But what’s most surprising aside from the addictive gameplay mechanics, vibrant pixel art style and charming tunes is the deep and inspiring story to go alongside Robin and her quest for vengeance against the ruling and authoritative government. But how well does the overall experience stack up against other similar style indie titles?

Check out our video summary review of Iconoclasts below:

Players take on the role of a rookie mechanic named Robin. Equipped with her trusty wrench passed down to her by her now deceased father, Robin uses a special skill that goes against the laws set forth by the sinister rule of the government organization, The One Concern. However, her unique skills also allows her to help citizens in need, which she courageously – and selflessly – accomplishes, in turn painting a target directly on her back for One Concern to hunt. The story of Robin and her quest to, not only fight against the vile and overpowered government, but to also save her planet from a tragic fate provides for an ample amount of play time alongside one riveting chapter after another.

The game takes on a traditional metroidvania style of gameplay that combines both meticulous platforming with thorough puzzle solving and enemy encounters. The basic pistol blast which semi automatically aims at enemies when close and the diverse melee wrench weapon create a steady pace for the game right out of the gate. You’ll spend plenty of time figuring out how to dispose of various enemies whether it’s with the standard shot from the pistol, ricocheting objects with your wrench or utilizing the powerful downward body slam on top of certain enemies. However, the game opens up the further you dive in, providing players with an arsenal of weapons and unique character upgrades to help out along the way.

Each area in Iconoclasts acts as one big map that has several altering pathways locked behind specific mechanisms. Robin will use her trusty, forbidden wrench to ratchet open doors or move various platforms in order to solve environmental puzzles. Some of the doors stay open after wrenching away at the lock, while others are timed and forces the player to act quickly. There’s plenty of frenetic moments within the adventure, but the diversity in challenges is also what makes Iconoclasts so enjoyable. The unique methods of taking out specific enemy characters and the many puzzles that stand in Robin’s way keep the game from bottoming out in a relentlessly tedious nature, but rather pushes the player’s mental fortitude.

The adventures through each level which takes Robin through a new setting is plenty diverse. There’s a great deal to navigate around whether it’s left or right, up or down – each level presents its own unique challenges. And to avoid getting lost in the many different directions to travel, each level also comes with its own map to help alleviate any confusion on where to go next. The maps clearly point out where the player has already traveled, specific landmarks such as save points or treasure chests, and any location that hasn’t yet been visited isn’t portrayed on the map so players may venture towards the unmarked area in hopes of progressing. It’s a handy feature not typically found in many 2D adventure games, and helps incredibly well when faced with Iconoclasts many different areas to explore.

You’re Going to Need a Weapon or Two

One of the more unique features in Iconoclasts is upgrade system. Okay, so it’s not the most unique feature to hit a game, but offers a small dose of customization to the mix. Players will find and collect various crafting materials and with those are able to use the crafting table found in each level to hold on to and equip at save stations. While the upgrades aren’t typically anything to write home about, they do offer small bits of progression character personalization, such as faster movement speed, longer breath holding during underwater moments and various extended weapon abilities. You’re only allowed to equip a certain number of upgrades, so choosing wisely based on your specific play style or a particular moment in the game is crucial.

Iconoclasts offers plenty of exploration and puzzle solving to keep player engagement filled with strategy and surprises. Eventually, Robin will come across new weapons, special abilities for already owned weapons and befriend various characters who will occasionally tag along on the adventure. Each weapon provides a primary and secondary attack which also goes for the melee wielding wrench which may be used as a standard melee attack, wrenching open locked doors, as well as unlocking other useful features to allow further progression in the game. There’s a good amount of exploration and strategic problem solving rooted deep within the game’s formula, as the execution of said problem solving easily leaving you wanting more.

However, the many puzzles that stand in your way throughout the adventure and countless enemy encounters each with their own unique method of disposal is only a chunk of the game. Throughout Robin’s endeavor to save the planet there will be a good deal of challenging and controller gripping boss fights that all have unique tactics of success. Many of these larger-than-life boss encounters may take numerous playthroughs in order to nail down the specific strategies. Luckily, the game offers up a restart point at the very beginning of the fight. It’s handy and doesn’t give time for the player to become too frustrated as there’s not much in the way of needless replayed moments.

Between the extensive amount of bosses to face and overcome, variety of unique weapons and upgrades, deep storyline mixed with a modernized take on the classic metroidvania play style, Iconoclasts is as vibrant as they come. The combat is especially easy to learn but the tactics at which you need to take for nearly every enemy keeps the gameplay strong. Progression is at the heart of the game with plenty to learn and new mechanics to grab ahold of throughout your adventure. And to keep the game pushing ever-so vindictively forward, the story continues to unfold a narrative between strict religious believes and the freedom to live the way you desire. There’s a surprising sense of quality surrounding the heavy load of dialogue, making it title well-worth the visit for anyone striving for an inspiring tale.

Iconoclasts deepens the indie experience with a profound narrative between an over-ruling government organization, a rebel force speaking for equality and our protagonist who’s caught somewhere in the middle. While the story may keep players engaged, it’s the metroidvania gameplay style and many character upgrades that easily keep the player chugging along to the final conclusion of the surprisingly riveting plotline.

A perfectly presented indie title which overflows with retro inspiration, Iconoclasts is an incredible experience for those looking for platforming, action-adventure, boss-battle mash-up. With plenty of strategic methods included in the gameplay that demands player concentration and skill, Iconoclasts skips along as one of the better indie titles to grace systems this generation. There seems to always be something pushing the player further into the story as the game combusts into a gripping tale of a feud between an overpowered titan of a regime and the freedom to live openly without the constant barrage of life-hindering regulations to abide by. Iconoclasts is not only an enjoyable and rousing game to savor, but an experience that leaves a lasting impression on the player from start to finish.