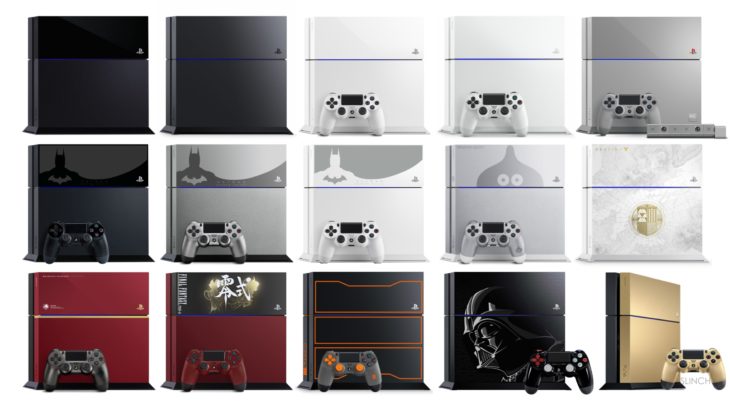 Or Are You Simply Breaking The Bank?

We see it every year. Exclusive console editions, new bundles or now even new upgraded versions of a current gen piece of hardware. Many consumers choose to trade up – or down -, keep a healthy collection of prized systems or add a few different machines to keep everyone in their household happy. But, is owning several different versions of one console worth the extra cost, shelving room and hassle of completing your collection of gaming systems?

There are several occasions where bundling up on your Playstation’s or Xbox’s is actually a good idea. Multiple gamers in one household can often lead to cluttered hard drive space (or memory depending on how old the console we’re talking about), even with separate accounts. Taking advantage of holiday deals, used prices or regular price drops can help ease any data storage pains with a multiple gamer household. And if each console has its own television or monitor paired with it, then there’s no waiting for your console to free up for some quality game time.

While initially most consoles give your wallet or bank account a beating between new games, accessories and the hardware itself, over time the constantly moving industry allows for rather negotiable price ranges. A once eye-popping expensive new console can see up to a fifty percent price drop within the next couple of years, a modest amount of time before hard drives start to fill up and your household needs more gaming space. So, while not everyone can afford multiple consoles right off the bat, over time the idea of littering your homes with two or three identical consoles becomes a bit more bearable to imagine.

A World Of Selections

And for the avid collectors out there, spending your hard-earned cash on collectors consoles may not be the most resourceful way to chuck out your savings, but it does provide a rather impressive collection to marvel over. This year alone saw a flurry of limited edition consoles, like the Days of Play, Spider-Man and the 500 Million PS4 consoles, while the Xbox One has seen Minecraft and Gears of War 4 editions grace its fan base over the years, as well. These slick limited consoles are perfect for gamers who wouldn’t want to spend their money any other way, but also create a perfect line of history highlighting the gaming industry within their prized collection.

Many collectors gobble up these limited editions to keep forever on display as a historical piece of hardware to show what was making headlines at the time of release, but some just like having multiple consoles to play on. With the linking of all consoles from one account, switching between consoles is easy and the Cloud technology makes it even easier. Pulling save data from one game on one console is easy if you plan on diving into the same game from a different piece of hardware. The luxury of equipping a console in every room in the house has never felt so simple and ready to use as it does in the current gen of gaming.

Sharing May Be Caring, But It’s Not Always Ideal

Pulling back to the theory of multiple gaming enthusiasts living under one roof, keeping extra consoles tucked away in several rooms throughout the household makes sense, especially when each occupant is home during the same hours. No one likes being told to wait their turn – be it child or adult – so opting for additional pieces of hardware seems like the safest, though most expensive, bet to keep everyone happy.

But, we’re not all collectors and many of us only require one console to get our fix in, so is multiple consoles of the same variety worth it for this crowd? Probably not, but things change and life tends to throw curveballs one after another, so a wide selection and open mind of owning several consoles might benefit you later on, if it doesn’t now. One curveball could be the suffering of losing a system due to technological failures, overheating or electronic consuming dust particles (it’s always wise to keep your gaming devices clean on the outside, and in). Forgoing a trip to the store and digging into your deep console collection is a near-perfect example of when owning multiple consoles of the same variety can pay off handsomely.

Of course, one last reasoning of purchasing two or more Playstation’s, Xbox’s or Switch’s is the recent trend of mid-gen upgrades. Sure, you could easily trade or sell the old console in order to help pay for the new upgrade, but keeping the old system alive alongside the new and improved version also has its benefits. Transferring over old save files, installing all of your previously purchased games and setting up your account can take up a lot of time and data – so why not use the new console for newly purchased games? No, you won’t save any money – and often times, that’s the front-runner as to why we make the decisions we do – but you will save yourself a hefty amount of time; precious time used for diving into your new and improved properly working console of choice.

A Situation Calling For Multiples

So, is owning multiples of the same console actually worth it for the average gamer? Probably not, but it does have its perks. While we all may not agree to keeping a piling collection of expensive hardware lying around, growing year after year – but when put to use properly and in the correct manner, there is absolutely perfect reasoning for doing so.