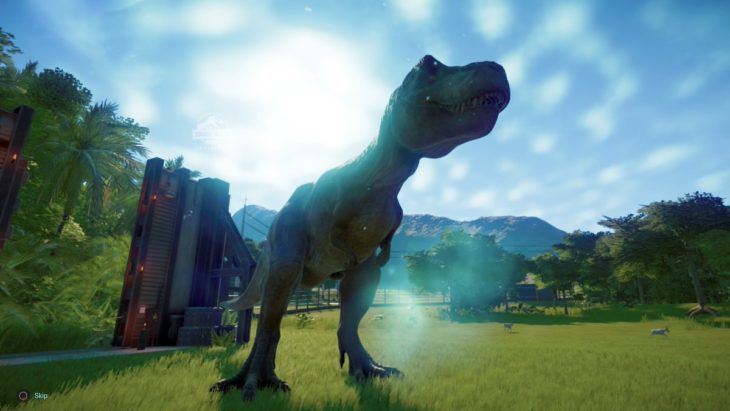 The rewarding feeling of constructing your own Jurassic playground filled with guest amenities, research establishments and, of course, fenced-in dinosaur areas grows with the more time you spend in Jurassic World Evolution. While successfully maintaining your park on each island is rewarding all on its own, the thrill of incubating and releasing your favorite exotic dinos is all part of the exciting experience.

Similar to other park management titles, Jurassic World Evolution has players taking the reigns as the owner of a series of dinosaur parks inhabiting off-shore islands ripe with lush landscape and space for the next Jurassic monopoly. Many different facets take place when expanding and managing a park of this magnitude, and with it comes a variety of problems, missions and rewards – all of which push the player to more fruitful discoveries, as well as profitable margins.

Whether you’re starting a new park from scratch or deconstructing and rebuilding your park to get your finances out of the red and into the green, there are a handful of islands each with their own landscape design to keep the challenges coming. Early on players must simply create a viable Jurassic ecosystem for crowds of guests to enjoy. Dodging all of the pesky problems that lie in the way while at the same time running a successful and complaint free business is a unique juggling act that can occasionally take a bite out of your profit (literally). It’s your job to help turn things around and run a proper Jurassic business.

Discover a Wealth of Dinosaur Fossils

Obviously, the most profitable feature in your park is the ability to take discovered fossil DNA and incubate living, breathing dinosaurs to be released into a contained wild. Drawing in more guests is crucial in raking in the money and improving your park rating, so the more dinos you have happily running around, the more success you’ll see. However, things aren’t always as easy as they appear, and one wrong move can set finances into a tailspin resulting in less maintenance around your park, less dinosaur and park research capabilities and overall growth of your Jurassic kingdom.

But first, the game sets you off on a string of tasks that slowly shows you the ropes of how the game’s primary functions operate. Building the Hammond Creation Lab allows players to take previously uncovered dino DNA and start an incubation period which can last anywhere from a couple of seconds to a couple of minutes. Depending on how much DNA the owner has discovered through various dig sites dotted across the globe, the viability percentage will increase the odds of a successful incubation period. Once properly incubated, players may then release the dinosaur – but not before constructing a specific enclosure first.

Players may also customize various traits on each dinosaur they incubate with the genome customizing process. By unlocking through various research methods, players can add unique traits to incubated dinosaurs which can alter eating habits, skin toughness, color and pattern design or even attack power. The genome alteration is an excellent way to earn more financial income by providing unique dinosaur appearances , but also lowers the viability percentage the dinosaur with every additional trait added.

The name of the game is building and dino breeding. Connecting guest walkways from every structure is crucial for bringing in the bucks as it allows guests to enjoy every establishment. From restaurants to fast food, gift shops to sprawling innovation centers, guests have plenty of opportunities to spend their hard-earned money at your park – but it’s up to the player to create a worthwhile experience. And the more dinosaurs you have populating your park, the better.

With an enclosed fence around the creation center players are able to contain a handful of the early herbivores on the palette. The game throws numerous challenges at you once it picks up steam, such as ensuring your dinos are well fed, providing an appropriate climate depending on each species of dinosaur, and even remembering to clean up deceased dinosaur carcasses once they’ve passed on. And as your penned in dinos are living their new lives players are still capable of completing a variety of objectives to help expand your park.

Using the Expedition Center players are able to send out dig teams to fossil sites in hopes of bringing back fossils and precious elements. The dig site expeditions only take up to a couple of minutes, leaving players at a consistent speed of juggling between park maintenance and fossil DNA extraction. Everything costs a chunk of money, including sending out dig teams and incubating new dinosaurs, so every new viable dinosaur discovered means a larger profit margin.

Further keeping park owners on their toes is the dangerous breaches that may occur in unhappy dinosaur areas. Each dino that’s created has hunger and comfort levels that must be maintained, and all species have a description of particular living conditions, i.e. shade from dense forest areas to wide open grasslands to roam. If these particular conditions aren’t met (which can be done using the various terrain tools) then your chances of a dinosaur escaping and wreaking havoc on the park increases greatly.

By equipping your park with multiple ranger teams and an ACU (Asset Containment Unit) you’ll be able to help prevent, or at the very least, contain any runaway reptiles. Ranger teams are staff members in the iconic Jurassic Park jeeps that can be assigned tasks like repairing fences, medicating sick dinosaurs or restocking food supplies for each dino area. The ACU team complete heavier tasks via helicopter, including removing dead dinosaurs, tranquilizing escaped dinosaurs and moving an unconcious dino from one area to the next.

Perhaps one of the most enjoyable experiences while maintaining your park is the ability to manually drive around in one of the ranger team jeeps or fly an ACU helicopter. While exploring your island players can complete tasks that these particular teams encounter, or volley around appreciating the success of your park. Exploring in the jeep is particularly fun as players can experience the crowds brought in, as well as partake in the game’s photo mode. Snapping a variety of different shots from multiple dinos in one frame to catching them in a number of different actions like eating or fighting can also help earn you extra money.

Between juggling the duties of creating new attractions for a larger profit, sending out fossil teams for a larger variety of over 40 dinosaur species or keeping a clean and safe park for your guests to enjoy, there’s also plenty of unique objective contracts that will be offered to the player as well. Categorized in either Science, Security or Entertainment, players will receive offers to complete objectives, such as successfully incubating a new species, ensuring no guest casualties for a specific time limit or discovering new fossils. These side contracts help reel in more financial flow to your park, as well as increase the owner’s ranking for each category.

As players advance and begin filling up an island, an additional island is then unlocked. There are six islands all together each with their own unique layout and often initially tasks players with completing a specific task before getting started on creating their next successful park. Repairing equipment and buildings which were damaged by severe weather or reconstructing a park to climb out of financial ruin are a couple of scenarios in which players may find themselves tasked against. Proper management and careful financial displacement is vital for success, and something that makes Jurassic World Evolution all the more gratifying.

Related: Ni no Kuni II: Revenant Kingdom Review – Building A Kingdom To Save The World

Building the Jurassic kingdom of your dreams and uncovering loads of incredibly breathtaking extinct dinosaurs is something I never thought I’d get as much enjoyment out of as I did. The easy to manipulate flow of park management mixed with fossil discovery is simple to understand but takes a moderate deal of dedication and thought invoking tactics to get just right. Keeping not only your guests safe, but also overly aggressive dinosaurs away from other, more non-confrontational species helps add to the realism and sense of depth in strategy for the park building simulation title.

If you’re looking for something to occupy loads of time and continuously throw curveballs in your direction, Jurassic World Evolution nails it. The management strategy of successfully maintaining your park brimming with exotic reptiles, keeping safe guest conditions and ensuring a profitable income all comes with their own exciting rewards. Discovering new dinosaur breeds and genetically altering genomes adds some much-appreciated flavor to the mix making Jurassic World Evolution a must-have for any fan of the park management genre.