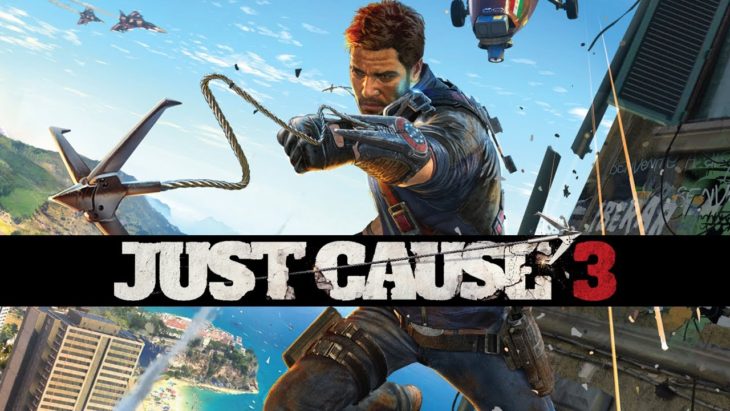 Jumping into open-world sandbox titles gives a certain sense of freedom and exploration now met by dozens, if not hundreds of modern titles. Now developers have to “up the ante”, so to speak, to grab the attention of fans. The Just Cause series does exactly that, and there’s certainly no exception for Avalanche Studios latest series installment, Just Cause 3.

Playing as rebel hero, Rico Rodriguez, in his home islands of Medici, you’ll fight alongside old friends and familiar faces, new allies and important public figures to claim back the lands that once belonged to your people. Causing monumental destruction across tons of military bases and overthrown towns placed throughout a huge map, you’ll shoot, drive, blow up and glide your way through the mountainous islands.

Upon your arrival into Medici, you are greeted by Rico’s longtime friend and partner, Mario Frigo, and the genius, witty scientist, Dimah. Taking the unique playstyle from the previous releases, you’ll use your grappling hook to reel yourself in, and your infinite parachute to rise into the skies, making for quick escapes and useful vantage points. To enhance the play even more in Just Cause 3, Dimah has invented yet another contraption to add to her arsenal. Equipping Rico with the new Wingsuit allows for easy traveling across the enormous and terraneous map, as well as new challenges and combat techniques to help Rico fight back for the people of Medici.

Across the dangerous lands of the fictional Mediterranean setting sit dozens of military bases, small populated towns or sprawling mid-sized cities, airports and other settlements which have been overrun by the opposing military forces. As the “winged” leader of the rebel forces, you take off to the skies equipped with your assault rifle, dual wielded pistols and, of course, your rocket launcher, with one goal in mind: to destroy and cause as much mayhem amongst the military forces of the villainous General Di Ravello as possible.

Liberating settlements comes from completing a task list composed of “Chaos Events” which mostly revolve around repetitive destruction and plenty of explosions. Blowing up fuel tanks, tearing down statues of the General’s likeness, destroying speakers towers spouting propaganda, radar dishes, circuit breakers and substation controlling units, or whatever other destructible military assets you can discover. Use beautiful explosions from C4s, grenades or rocket launchers, or other unconventional methods to wreak utter havoc. Using the “tether” ability from your grappling hook, you may attach two objects together, then reel them in quickly to destroy or eliminate your target without the use of bullets.

A sub-par narrative following the freedom of a people’s country and the hunt for the Medici’s sacred but dangerous mineral source, Bavarium, you’ll see just about every twist coming in Just Cause 3‘s story. Not to sway the player from an entertaining ride across a gorgeous Mediterranean map, breathtaking explosions, loads time challenges in cars, boats, planes and wingsuits to enhance Rico’s abilities, and solid arcade-like, run ‘n’ gun action, Just Cause 3 delivers destructive ecstasy and mayhem placed in a lavishly beautiful setting, for plenty of drop-in and play action.