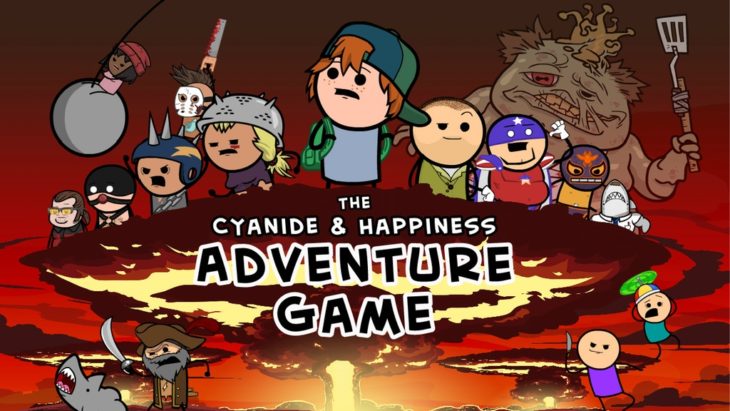 The adventure game full of witty humor, dark settings and an unforgiving relationship between the story’s protagonist and the school he attends kicks off in the new upcoming adventure title on kickstarter. Off to embark on a journey like no other, the peaceful but strange town of Netherville succumbs to the tragedies brought forth by the neighboring mega cities in – The Cyanide & Happiness Adventure Game.

The first video game from the C&H team – a team primarily focused on comics, card games and animations – are bringing all of their quirky and dark humor to the gaming world. While surpassing its original goal of $300K, the pledge that is now backed by over 12,000 followers still has almost 10 days to go. The total pledge is well over the $450K mark, closing in on the $500K pledge, which would allow for more content like side quests, a longer story and a Mac/Linux release.

As the pledge grows, if the game were to raise even more money to help fund the project, releases on consoles and even more story and quests, further pushing this adventure game to new heights. And of course, the more money and donations a backer pledges to the project, the more gifts and rewards you’ll get from the development team. Game soundtracks, wallpapers, your name in the credits and many other options are available to specific donation totals in different tiers of rewards.

The charming art style and the mature and often dark adult humor is littered throughout this upcoming title, and the team hopes to release the first chapter by December 2018. With the C&H team un-familiar with the game developing process and focused on animations and programming, veteran Roger Barr of Skeleton Crew Studios and I-Mockery, will be join the Cyanide team for this release. He’s worked on titles such as Bionic Chainsaw Pogo Gorilla and the upcoming Steam title, Grave Chase.

In a strange world full of radioactive waste, awkward characters and side-splitting dialogue, The Cyanide & Happiness Adventure Game will be looking to take the project to the next level once their successful Kickstarter pledge comes to an end.