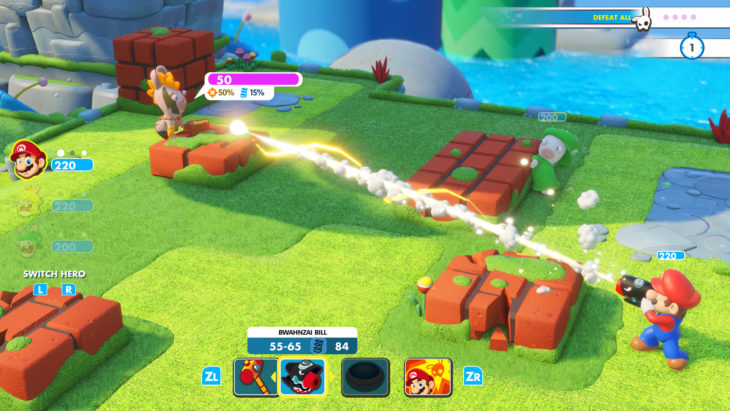 Mario + Rabbids: Kingdom Battle is a game that proves players perceptions are not always correct. The title of the game was first leaked earlier this year and was met by horror from players who hated the idea. However, after E3 most gamers changed their minds about the game and as a result, Mario + Rabbids has become a ‘must have’ for the Nintendo Switch. Is it really that good? Let’s find out.

It opens with a short cutscene that explains how the Rabbids ended up in the Mario universe. The Rabbids somehow end up in possession of the “SupaMerge” which can combine two things together. Allowing the Rabbids to accidentally combine themselves with the Mario world. Naturally, chaos ensues.

While the game is set in a linear world, it’s possible to run around with the party and explore the areas. There are different hidden chests around each level filled with surprises and collectables for players to hunt down. There’s not much incentive to find these chests but for those who enjoy trying to 100% games, just know there’s plenty to find.

There is an element of exploration to the game but most of the gameplay is focused around the strategic combat. The tactical combat plays similar to the X-Com series where it’s turn-based. Players can give each character in their party a different order to move or attack enemies. The mechanics are deep enough to be entertaining however, they’re also simple enough that almost anyone can play the game. There’s a range of enemies to fight in the game also which are introduced slowly so players have a chance to learn their weaknesses before being faced with several of them which is nice.

Each combat section also has a different goal such as defeat all enemies or reach the highlighted area. This adds some variation to the combat however, it’s still possible for it to become a little bit repetitive.

Mario + Rabbids: Kingdom Battle is the tactical strategy game that the Nintendo Switch needed. It offers good challenge later in the game and there are reasons to replay the game however, the gameplay can still become a little repetitive when played for long periods of time. This is a great game and it’s set to become a classic title for the Nintendo Switch.