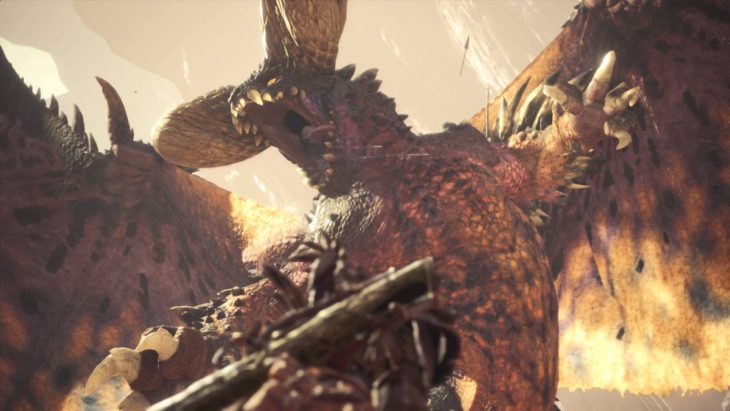 Prepare For An Incredibly Deep and Rewarding Hunt

World places players into the Fifth Fleet – a group of monster hunters destined for the New World in hopes of bringing down the elder dragon, Zorah Magdaros. Equipping yourself with protective armor, one of the 14 different styles of weapons and, of course, your helpful Palico cat-like companion, players gear up to embark on a journey that pinpoints the thrill of a hunt, and the constant challenges that come along for the ride.

The exploration in World is one of the most impressive current gen titles to accomplish such a fulfilling experience of discovery. While previous Monster Hunter releases limited players to timed quests only, the thrill of embarking on World’s expeditions for as long as you’d like is something the series has been missing for a while. Without any time constraints, players are free to explore unknown breathtaking lands, try their hand at taking on Astera’s biggest threats, hone their skills, or spend time collecting important crafting items and upgrading materials.

No Need to Hunt Alone

World offers thrilling single player action, but has a huge emphasis on multiplayer co-op. While it’s entirely possible to engage quests, as well as complete them solo, things get much more appealing and rewarding when teaming up with other hunters. The problem lies in the awkward approach to online play. Where most games offer players a lobby or central hub crowded with online players, World negates this method with the option to join quests via invites, or signaling for help using emergency flares.

Players may also join in on quests by grouping up with team leaders in the hub, or Research Bases, but often find it easier to jump right into the battle – as opposed to searching for an appropriate quest, or waiting for the team leader to start the hunt. While at first the online seems a bit confusing or not as simplified as other co-op based titles, World does an excellent job of working around the tedious method with substantial gameplay and content.

Aside from venturing into the New World on timed quests in hopes of being rewarded with equipment boosting materials and experience, expeditions is one of the best modes to “let loose” when taking full advantage of World’s massive ecosystem. While the quests usually reward players with game changing items and crafting supplies, expeditions allows players to fully scope out the map, re-up on any useful items, and collect valuable research points. Without the looming hinderance of a time limit, spending all day out in the open can lead to some exciting discoveries, which would otherwise become inhibited by the ever-ticking time limit found on traditional quests.

The More You Hunt, The Stronger You Get

Throughout your explorations and monster hunting duties, players will eventually become under equipped with both armor and weaponry. Across the 14 different types of weapons, players will have all of the base weapons from each category available for use. Giant, slow maneuvering Buster Swords pack quite the wallop, but leaves players wide open for deadly attacks. The quick acting Dual Blades are great for landing long combos, but deal considerably less damage than most other weapons. This helps players figure out, not only which weapon suits their combat style, but also allows players to perform a sort of trial and error method to see which weapons work best against certain monsters. Every monster is a powerful boss-like enemy, but each has their own set of weaknesses to address.

For every weapon, there are numerous tiers to not only upgrade power and other stats, but with the right materials players can craft a completely new version of the weapon type. Bones and other monster parts are added to weapons to change the specs and add different damage bonuses. Monster Hunter isn’t about leveling your character, so much as it’s about upgrading your equipment. The equipment crafting is the bloodline of the series, and World expertly takes this tactic to the next level.

Upon gathering materials hunters will also use their handy scout flies to collect valuable resources. These resources can be anything from flora and herbs to the ever-present tracks left behind from monsters. Footprints, scratchings, feathers and mucus droppings are discovered throughout your journeys, each providing valuable information for easily tracking monsters. Research points are also cashed in to purchase stat boosting meals and equipment for your Palico companion. Finding new resources is an important asset in keeping the hunts alive and filled with plenty of monster slaying action.

The many types of quests featured in World is varied in many different aspects. Main assignments act as the storied quests and require tough as nails combat along with plenty of training. Investigations are a type of side quest and add a bit more variety than the typical hunt and kill assignments. Capturing and slaying multiple targets are the standards for investigations and may be picked up for simply encountering various monsters.

Within the Research Base players are able to organize their inventory, forge and upgrade equipment, meet with online players in the gathering hub, freely train with the weapons of your choice, or earn rewards from the resource center. Taking on bounties at the resource center provides players with fetch and grab quests, usually looking for a certain number of mushrooms, flowers, bones and other useful items, as well as completing a specific number of quests in a certain area. Rewards for completing bounties are usually pretty helpful, most notably the armor spheres which help boost the stats of the armor pieces of your choice.

The flow of tracking down monsters, meticulously and patiently striking down your target is something so incredibly distinct in the beloved series. With all of the compelling ways to craft and enhance your abilities, unique methods of tracking, capturing and slaying monsters; discovering the many secrets the New World has to offer is as thrilling as it is challenging.

Monster Hunter: World creates a strong and meaty story line that does an excellent job of introducing new players to the basics, as well as the new additions to the series. With loads of content and a purely satisfying adventure title in a gorgeous open world, veterans of the Monster Hunter universe will find the first major console release of the series in almost a decade is just about everything we’ve been hoping for, and more.