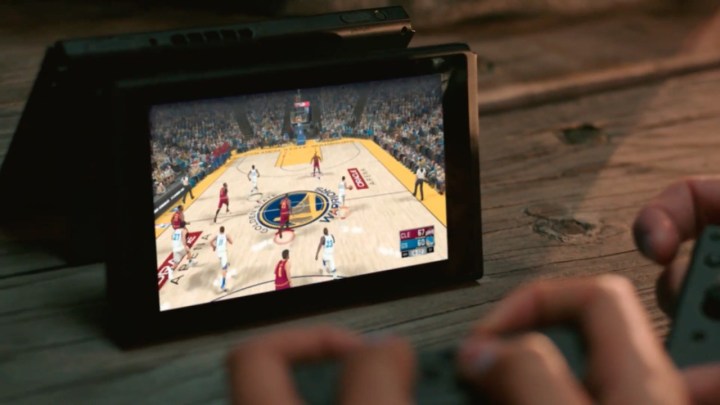 New details on NBA 2K18’s Nintendo Switch version have just been revealed. It’s now known that the game will run at 30 FPS on the Switch while it will be 60 FPS for the Xbox One and PlayStation 4. However, we don’t know yet if this is just for the undocked mode on the Switch. Despite this, we now know quite a bit about the upcoming game.

Nintendo showed a small part of the upcoming game during their Nintendo Direct earlier this week. The Direct didn’t reveal much about the game but we do know that the Switch version contains the exact same features and modes as the other versions of the game. The only difference will be the drop in frame rate. In addition to this, the Switch versions of the game will not feature Amiibo support. So there won’t be any special Amiibo’s coming in the future. However, Nintendo Everything reported differently last month.

Some footage of NBA 2K18 on the Switch was released yesterday showing the game in handheld mode. If you’re on the edge over whether or not you should purchase the game then take a look at the below footage.

According to GameSpot, Nintendo has also released a press release stating that the game will have “stunning graphics”. The above footage certain reflects this as the game looks incredible.

There are three versions of NBA 2K18 currently available on the Nintendo eShop. The base version costs £55 and requires 22.9 GB of space. The Legend Edition costs £85 and is the same in terms of size while the Legends Edition Gold is £120 but is thankfully the same size. Each of the ‘premium’ versions comes with a little extra digital content such as special cosmetic items.

Will you be picking up NBA 2K18 for the Switch? Let us know!