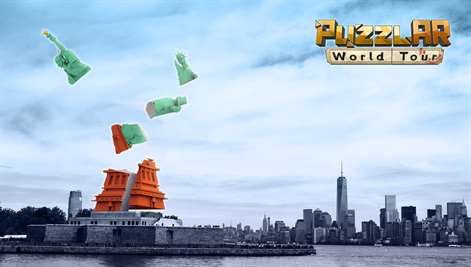 The Augmented Reality market for the gaming industry is slim and the demand isn’t relatively high. The new puzzle title from Bica Studios has placed another stone in the AR pond today, with their latest iOS title, PuzzleAR: World Tour.

In this new puzzle title, the player will create and reconstruct historic landmarks ranging from the Taj Mahal to the Statue of Liberty. Using the AR technology, players of all ages will be able to interact with the 3D world around them through their iOS device. As long as you carry a device with the iOS11 ARKit, PuzzlAR is available for a low-cost.

With this unique twist on AR puzzling, the Augmented Reality genre could start seeing an upswing. CEO of Bica Studios – Nuno Folhadela – certainly has a positive outlook on the future of the AR tech, saying:

“We want Augmented Reality to be approachable and what a better way to introduce it than with puzzles of famous landmarks? PuzzlAR: World Tour offers a new and fun gaming experience that is only possible with ARKit. It is an extremely exciting time to be a game developer”.

With the three puzzle locations – Statue of Liberty, Taj Mahal and Saint Basil Cathedral – more options are planned to arrive monthly. Each month new options will be available to choose from, and the selected title will be presented as the next in AR puzzle excitement. The opening four historic locations to start things off are – the Brandenburg Gate, Forbidden City, Palace of Westminster and Himeji Castle. By investing your time and a small portion of money, PuzzlAR: World Tour can expand into a masterful, real-life puzzle title.

The list of iPhones/iPads equipped with the necessary ARKit are the 6s and 6s Plus, 7 and 7 Plus, SE, 8 and 8 Plus, iPad Pro and the newest iPad(2017). Find the newest Augmented Reality puzzle game, PuzzlAR: World Tour, in the App Store available now.