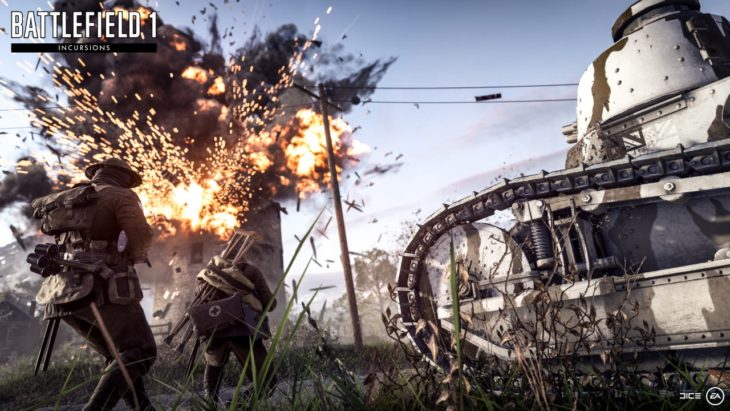 EA announced a brand new competitive mode for Battlefield 1 last month. The new mode is called “Incursions” and is a 5v5 mode which is a smaller but more strategic take on the gameplay from the game. DICE producer David Sirland has released a blog post detailing the mode further. It also confirms that the closed alpha testing will begin today.

The details are still a little limited right now but Sirland confirms that “using destruction as a tactic,” will still feature in the mode. In addition to this, vehicles should also play a role in the new 5v5 mode.

While Incursions is made to be a more compact version of the large-scale battles of Battlefield 1, it still features the iconic gameplay elements. Their vision, however, is clear. Incursions will be an “easy to pick up, hard to master” mode where two five-man teams fight it out. The more strategic players will be the ones that stand on top in this mode.

In addition to vehicles and destruction, there will also be unique classes to select from. Each of these classes has unique strengths and weaknesses that make them better suited to specific situations. We don’t know anything about this yet however so we’ll have to wait for the Closed Alpha to begin.

The Closed Alpha begins today (September 21st) and select players will be invited to the battle. We do know that they’ll be playing on a scaled-down Giant’s Shadow map and that they’ll have two vehicles for their team to use.

Not everyone has made it into the Closed Alpha test but more tests will be coming in the future. In addition to this, it looks as though livestreams and gameplay videos of the new Incursion mode will be allowed. So if you missed out on an invitation you’ll still be able to at least check out the mode.

The full blog post on the Closed Alpha for Incursions can be found here.