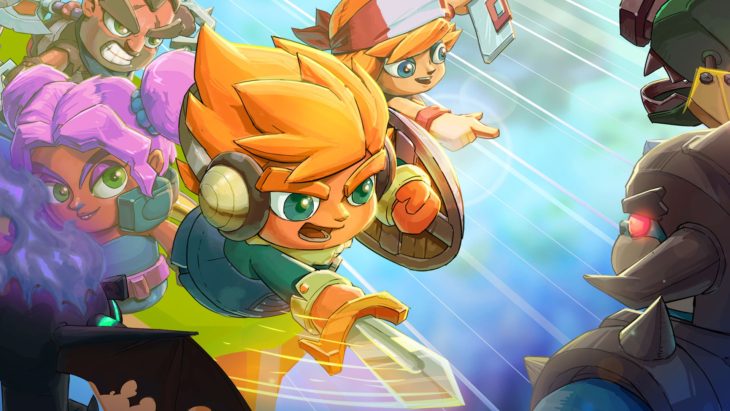 Summoning the Power of the Ancients

With a subtle blend of varying gameplay styles and a unique take on progression, Next Up Hero forces players to adapt to important tactics and combat maneuvers that if featured in any other game would become tedious or tiresome. Summon a few Ancients, make your way through an endless amount of levels, and prepare to meet your maker time and time again in the indie action game from Digital Continue.

The interesting concept behind Next Up Hero allows for a continuously progressing approach no matter the outcome each time you enter a dungeon. Players must fight against waves of enemy monsters using one of the many diverse characters equipped with their unique abilities. By teaming up with previously fallen brethren from past attempts, players can utilize former errors resulting in death and have AI partners summoned to fight at their side.

Players start the dungeon crawling experience by jumping into one of many randomly generated dungeons known as “ventures”, that of which throw a variety of different enemies and challenges your way. Players may either choose from the selection of online created ventures or they’re able to create their own through a selection of level traits, such as difficulty, length and region they wish to have the venture take place in. Also, adding a specific amount of currency into the mix will boost the appearance of rare enemies which hands players beefier rewards.

The ventures can last anywhere between 10 levels to over 100 each with levels incorporating stage clearing objectives like eliminating a certain number of monsters, one specific rare monster, or a truly skill-testing boss battle. The gameplay behind Next Up Hero combines a flurry of differing styles depending on each character – like KungLi’s quick martial arts-style melee punches, or Rook’s boomerang range attack. Players can find themselves comfortable with a twin stick shmup style of range attacks from the character MixTape, as well as a hack ‘n’ slash approach from Vale – it all depends on personal preference to a specific play style.

While each character has their own attack method that differs from one another, they also come equipped with a special ability, as well as an unlockable unique skill attack. MixTape uses his duel wielding pistols to keep a relatively safe distance from enemies, but can also utilize his special ability which fires a quick stream of bullets to break through shields and take out tougher monsters more quickly. When unlocked, he’ll also have the ability to fire off a couple of rockets that randomly take aim on any nearby enemies. Every character has a line up of attacks which all play into the initial style of their approach to combat.

As you progress through ventures and complete levels you’ll collect a number of different items like gold coins, monster tokens and pieces of equipment. The coins act as the game’s currency which allows players to unlock a mightier version of a character, however, the cost increases for every character you choose to level up. While the cost of leveling one character may be 250, the price will shoot to 500 for the next character you wish to improve. It’s not exceptionally difficult to acquire a decent purse as players keep everything you earn upon death.

Acquiring the Echoes of Former Lives

What makes Next Up Hero unique from other permadeath dungeon crawlers is the ability to summon what are called “echoes” which are spirit allies left behind by other players who have died in that level. The echoes may be summoned to fight alongside the player, but may also be used to convoke what’s known as an Ancient. Ancients are powerful warriors which can greatly aid players in combat situations, but can only be summoned when the player absorbs a specific number of echoes.

Some Ancients require 2 echoes, while others require more than a handful. Ancients can provide a temporary boost in health or attack power to the player, or can be momentarily summoned alongside the player – dealing much more damage than your standard echo summon. More difficult ventures typically have much more echoes lying around as more players will continuously die off, so that gives a bit more incentive to try your hand at tougher areas for greater rewards. It’s an unorthodox approach to the dungeon crawling formula, but it actually works rather delightfully and becomes increasingly more addictive the further you plunge into each venture.

Along with the challenges players will face within each dungeon is the ability to assign your own timed challenge. Players may generate challenges through selecting various objective traits, such as amount and size of enemies, as well as how long you have to complete the challenge. It’s a rather coy method to add more depth to your dungeon crawling experience, but it also tends to come with very little broadness in terms of diversity.

When slashing through monster waves and exploring dungeons players will also come across unique equipment pieces. Once you have a character at a high enough level you may begin equipping these pieces of equipment, which increases various attributes to help the player on their perilous journey. It can turn into a long grind to have your favorite character leveled enough to open up all equipment slots, but the outcome helps tremendously when tackling the tougher, more enduring dungeons.

You Never Have to Go It Alone

Next Up Hero produces a dungeon crawling experiences where most fans of the genre can saddle up and enjoy themselves thoroughly. While there’s no actual story selection of levels, there are tons of user-made levels to keep you entertained. With every player profile level up – different from character levels – players are rewarded with additional dialogue tagged onto the story of the vile Ceaseless Dirge monsters who have consumed the surreal world. The more dungeons you conquer and the more times – not just you, but the entire community – perishes, the more powerful your characters become.

What really makes Next Up Hero such a punishing experience is the lack of healing opportunities and the missing option to effectively dodge or roll. Sure there’s a way to dash for a supremely short amount of time, but that hardly accomplishes any sort of defensive evasion tactic. However, if playing online player may have the rare occurrence of spectating as a guardian angel to assist other heroes on their journey. This method also comes with the ability to heal heroes or utilize what’s known as Community Continue, but is far too reliant on the community itself to gain any consistent and useful abilities from.

While solo players have the option to summon a group of echoes and Ancients by their side, there’s also the multiplayer ability to team up with a buddy to tackle venture in co-op. With such a tremendously difficult adventure and rare occurrences to heal up, co-oping might be the best way to increase your character strengths and abilities. and while the community continue and guardian angel multiplayer approach is unique, it can’t exactly be heavily relied on for survival.

The repetitive nature of Next Up Hero fits tightly in with the formula of randomness in the endless dungeon crawling chaos. The diverse cast of heroes helps assist players of all playstyles and conveniently assures most players will find an attack style to their liking. Creating ventures and playing through the constantly changing creations online will keep players on their toes for a while, but soon enough it won’t become too surprising or unexpected. With the ability to summon echoes, Ancients or even co-op with a friend, you’ll have plenty of options to keep you from going the punishing adventure alone.

For those looking for a gauntlet style of challenge through endless waves of dungeons, Next Up Hero is a fitting experience. While there’s not much in terms of diversity in level design or monster variations, the plethora of characters, attacks and abilities is a pleasing addition covering a wide variety of play styles. Next Up Hero may not cover the player in tons of different experiences and riveting story, but what is there is a smashing, dreadfully taxing dungeon crawling adventure incorporating a slew of different gameplay styles and relentless progression.