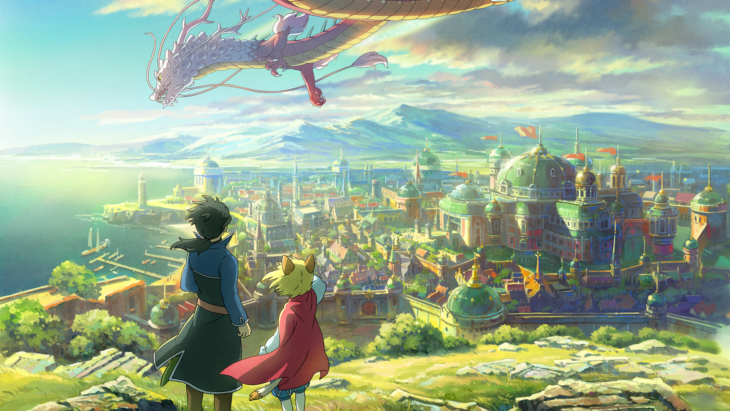 A Charming Tale of Peaceful Redemption

The exceedingly charming visuals, characters and story found in Ni no Kuni II: Revenant Kingdom is delightfully entertaining while ceasing in becoming too stale or overdone. The switch to a more westernized combat approach is a welcome change to the JRPG series; but that’s not all that makes this fantasy adventure a sheer joy to experience.

An Adventure Built from Travesty

As the cat-raced young king of Ding Dong Dell – Evan Pettiwhisker Tildrum – Ni no Kuni II starts off with treachery in the form of a coup from the local mouse populace of the extravagant kingdom. Diving head first into a thrilling adventure that leads Evan and his charismatic crew all over the world, you’ll soon learn that fighting off adorable monsters and sticking to a promise of uniting the lands is no easy task. With a perfect combination of numerous gameplay mechanics to keep you coming back for more, Ni no Kuni II shines as one of the more memorable action JRPGs released in recent years.

After a series of dramatic events, players will soon find themselves exploring the many regions of the world. Returning is the traditional Ghibli character design from Yoshiyuki Momose and fantastic musical score from Joe Hisaishi – both of which worked on the original. The most noticeable change is the combat style discarding the action/strategy of the first, and replacing it with a westernized “hack-n-slash” style. This new change makes Ni no Kuni II much more fast-paced and action oriented when compared to the first which is a delightful change.

A New Way of Combat

Aside from the newly revamped combat mechanics, the higgeldies have made a return to the field. These teams of odd, little creatures help immensely in battle offering unique tactics each specific to a different type of Higgeldy team. Some may offer a series of cannon fire while others help aid in healing party members. Swapping between one of the three party members and engaging in one of the many higgeldy teams on the battle field is a sure way to keep most battles fiercely engaging and excitable.

Along their journey players will meet plenty of characters from every race of the world. The main plotline will effortlessly push players to every region of the map throughout the 40 plus hours of gameplay dedicate to the story, but with the frequency of additional side quests and skirmish battles, it’s easy to go well beyond the 40 hour mark. Another aspect is the ability to create and build your kingdom which becomes an increasingly important task as you dive further into the game.

While the kingdom building aspect isn’t exactly the most in-depth and full experience, it does, however, offer some unique strategies not typically found in action-RPG games. Using the kingdom building specific currency, Kings Guilders, to spend on kingdom upgrades allows players to expand their territory and continue adding a variety of shops each run by qualified NPCs found across the map. By completing various side quests or unique errands players are able to recruit new citizens to help increase their population and overall profit with every minute passed in-game.

The larger you expand your kingdom the more room you have for new citizens, in turn allowing for more shops to be run efficiently. A great deal of the shops have a specific use and offers the player plenty of new upgrades, equipment or consumables for purchase. The spells shop offers new spells to purchase or upgrade old ones, while constructing a weapons shop allows for new weapons to be crafted or upgraded. Players may also conduct research with specific shops which allows for more advanced upgrades and outcomes.

More Than Just an Action RPG

As you explore the vivid world and many dungeons throughout Ni no Kuni II players will eventually stumble across the strategically demanding skirmish battles. As a slight change from the traditional combat sequences, skirmish battles allow Evan to control up to 4 personal armies at once in order to tackle a large number of opposing forces. This tactical method of wiping out foes is a much more strategy demanding approach to combat, and may only be triggered by interacting with specific battle flags scattered all over the land.

5 Of The Best Games Releasing In August 2018

Wiping out waves of enemy armies and militia groups during skirmish battles is best tackled by utilizing each group’s strengths to opposing weaknesses. Evan is surrounded by four color coded military groups that may be freely rotated in order to directly combat with opposing forces who are weak to a specific attack pattern. Each mini army has a certain attack from archery to swords to heavy hitting hammers – and they all correlate with being weak to one type while stronger over another. Players must match up one army’s strength with an opposing groups weakness wich provides a unique spin on conquering foes in the diverse realm of Ni no Kuni II.

While the skirmish battles do help bring even more combat mechanics to the field of Ni no Kuni II, they don’t hold up as well as the traditional method of action-oriented combat. Maybe for those more accustomed to a more strategic and moderately slower pace approach to combat will find the skirmish battles as a refreshing break from the core mechanics of the game; but for most players it might seem as more of a side distraction from the primary gameplay.

With tons of side quests, exciting locations filled with unique characters, a gripping tale about peaceful redemption, a new and engaging combat system, and a litter of gratifying gameplay styles – Ni no Kuni II: Revenant Kingdom offers something to a broad audience of players. While not every mechanic may appeal to the average player, Ni no Kuni II has layers of distractions on top of a rich and rewarding RPG experience.

Ni no Kuni II provides a riveting fantasy tale while purposely catering to multiple types of gameplay elements at once. At its core, Ni no Kuni II plays like an excellent and thrilling action RPG with loads to discover. But with the varying elements of light kingdom building/management strategies and tons of side quests, tactical skirmishes and boss battles, Ni no Kuni II brings much more to the table. With charming visuals, enthusiastic characters and surreal settings brimming with enchanting and diverse regions, Ni no Kuni II: Revenant Kingdom is every bit enjoyable as its predecessor.