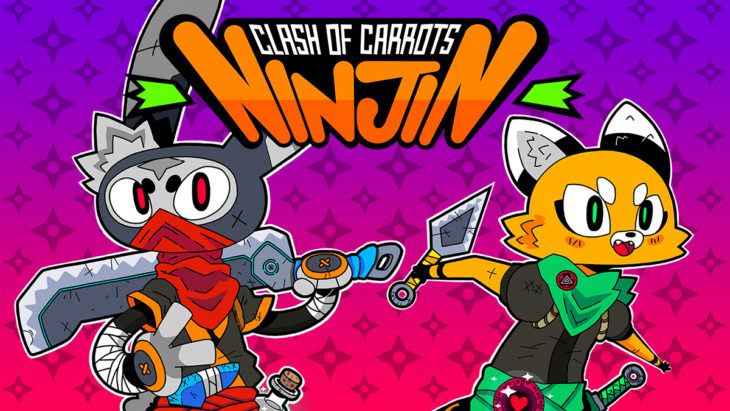 Don’t Mess With A Rabbit And His Carrots

Ninjin: Clash of Carrots presents a high-speed side scroller with beat em’ up mechanics and a vague addition of character progression. Use your cunning ninja abilities to stop the evil forces and bring back hope, and carrots, to the once peaceful world – be it by yourself, or with a friend.

Upon firing up your ninja quest of carrot redemption players are greeted with the option of choosing one of two playable characters: either Ninjin, the rabbit ninja or Akai, fox ninja. Both play relatively the same, but provide options for co-oping players to differentiate from one another. Both are equipped with lightning quick attacks and abilities, along with tons of helpful equipment and weapons to choose from.

In 2D side-scrolling fashion, Ninjin runs players through fast-paced levels taking on wave after wave of meddling enemy forces. With a slim, yet, effective skill set you’ll soon find the a healthy rhythm to linking attacks between kills. The standard attack brings almost zero over-the-head or under-the-feet attack box, so combat becomes mostly lateral. With a bit of a learning curve between dodging and saving your health to landing clean strikes without consequence comes a rewarding, heart-racing experience.

Aside from your standard attack also comes a few abilities that require the use of your stamina meter. Flash dodging and a powerful charge attack utilize much of your stamina, as the fast-paced action requires quick reflexes and quicker character actions. However, players aren’t strictly limited to the confines of melee as players may flick the right stick in the direction of your enemy for a ranged shuriken attack which also uses up bits of stamina. There’s not much complexity to the button layout which works absolutely perfectly with the pace of the game.

Life Saving Tips For Newcomers To The Dark Souls Series

As you charge through each level performing your quick ninja abilities waves of enemies begin to enter the screen from either the left or right side. Each enemy group typically enters in a specific pattern allowing for rhythmic dodging and strategic usage of your stamina meter. Depending on the ability performed a certain amount of stamina is drained from your meter, however, not actively using stamina recharges your meter after a few seconds. Utilizing standards dodge tactics is helpful early on to salvage unused stamina.

The ninja protagonist plays through a series of levels in a Super Mario style level select stage. Each section of the world houses a final boss level, as well as altering settings like lush forests to snowy mountain sides to bustling villages. The story that pushes players through the game is, more or less, simple and not very attention grabbing, but does set up a few childish, but humorous, moments. It’s a game about retrieving your villages stolen carrots – there’s not much room for drama in this “riveting” tale.

Eventually, you’ll find yourself on the other side of the learning curve swiping away at enemy groups and flinging ninja stars across the screen. The game continues to pick up pace with new and unique enemy encounters, including plenty of reappearing boss battles. The boss health bars are substantially bigger and each one has a few special abilities that spices up the gameplay. Add in randomly occurring enemy waves and/or obstacles and you may find yourself looking to upgrade your equipment. Luckily, Ninjin allows for just that.

Tons of Weaponry to Choose From

During the level select area players may also happen upon the in-game shop run by a furry little corgi known as…well…Corgi. While brawling your way through levels you’ll often collect carrots which drop in piles from every defeated enemy. These carrots are the game’s currency and allows players to trade them in for new mighty, and often absurd, weapons and stat boosting equipment pieces. Mixing up your inventory slots with the likes of stamina buffs, health upon enemy kills or increased critical damage provides a personalized approach to gameplay, as well as tons of varying weapons to unlock.

Aside from purchasing new items and weapons, players may also pick up new equipment in the midst of a carrot explosion after defeating enemies. Som weapons offer light slash attacks while others are slow and powerful. Equipping the right weapon – be it sword, axe, tennis racket or giant carrot – is crucial for your survival of later levels, but having an equally effective ranged weapon helps just as much. Standard shurikens offer light attacks with minimal stamina intake, while others may bounce off enemies or even act as a quick land mine spread, as well as increase or decrease stamina use and damage. There are loads of weapons to unlock through the relatively short campaign, giving players a substantial amount of options for attack patterns.

After a specific area in the game players will also unlock the use of a powerful special ability. These moves only occur once the special meter has filled after landing a number of melee attacks, but have the ability to deal massive amounts of damage to any enemy on-screen. Fiery dragons torch waves of enemies or ice chickens wreak havoc to every threat in sight, but only for a handful of seconds. Since the special ability automatically triggers every time the special meter is full, it restricts players from saving the ability for tougher areas in the level. They can be a game changer when activated, but a shame there’s not much control over when it’s triggered.

The energy of the game is mirrored by the fast rhythm of the of the soundtrack set to a colorful vision of feudal Japan. Slashing through waves, surviving boss encounters and collecting as many carrots as possible is a simple formula but manages overcome the burden of becoming overly boring. There never seems to be any unfair waves or unbeatable levels with every death typically caused by carelessness or still sitting on the uphill end of the previously mentioned learning curve. It can become satisfying to move around patterns of enemies to conserve stamina and striking when you have clear shots, but every level is also ranked based off of damage done, damage received and total time of completion. So, if you’re reaching for the highest score on every level it’s best to hone those ninja reflex’s for quick dodging and slashing.

Ninjin: Clash of Carrots offers a classic blend of 2D side-scrolling and a mostly thrilling beat em’ up experience. Stopping the evil Shogun warrior from stealing your carrot supply isn’t a must-play attention grabber, but the gameplay is rewarding all in itself. Sprucing up your playstyle with a flurry of unique weapons and equipment pieces, utilizing effective skills and finding that right balance of dodging and attacking is an exciting experience; and one that is driven by the rhythmic forces of patternized enemy hordes and incredibly catchy tunes.

The fast-paced action in this ninja inspired side-scroller is an enticing treat for those looking to train their intuitive button mashing. The colorful visuals compliment the otherwise dry narrative, but a few silly dialogue moments can keep the average player entertained. But the game is pushed by the excellent gameplay mechanics and mild character progression through equipment upgrades. Ninjin: Clash of Carrots won’t be your most memorable gaming experience, but it will have you sweating through heart pounding action from start to finish.