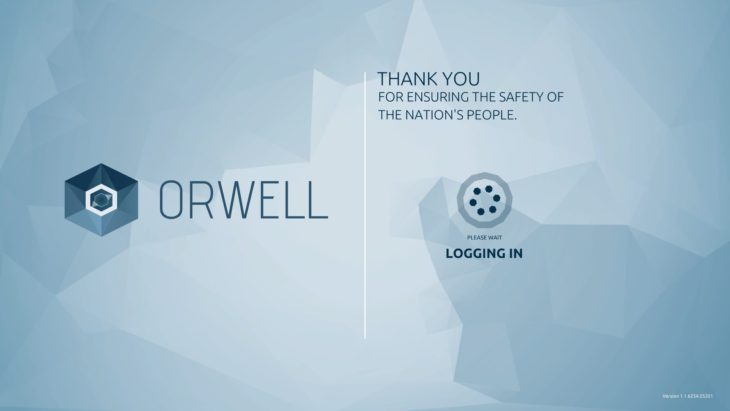 Orwell is a choice based game where players take the role of Investigator in the Orwell program. Orwell is an all seeing government program that is used to monitor and investigate citizens of The Nation. It sounds like a very straightforward game and on the surface it is. However, it’s a little more complex than the game initially lets on.

As the player takes the role of Investigator, their main task is collecting “Data-chunks”. These are comprised of different pieces of information found on the internet. They can literally be anything ranging from favourite type of food to a postal address. While the player can collect almost all of this information, it’s up to the player to decide what’s useful and what isn’t. All of this information is being collected in context to a serious crime and it’s up to the player to discover the truth behind the bombings while catching those responsible.

Orwell poses an interesting question. Where is the limit when it comes to surveillance? At one point in the game the system and Adviser think the phrase “partner in crime” refers to an actual crime as opposed to being casual slang. This Data-chunk can then be used as evidence against two people. It’s a very interesting game which forces players to think about the logistics and practicality of such a system.

There are several different endings to the game depending on the choices that players make. Each ending is rewarding and offers a very different outcome. However, while there are multiple endings the game lacks a real replay value. The story is still quite linear and there’s nothing really left to discover after the first playthrough. There are many achievements to collect however which could make replaying the game worthwhile.

This is a very interesting and thought-provoking game. While it lacks replay value, the first playthrough offers an amazing experience. The story is filled with twists and turns that completely change the direction of the investigation. In addition to this, the player has several chances to make a direct impact on the story as it progresses through the game. Perhaps the biggest downside to Orwell is the fact that it’s a relatively short games which can be completed in 3 – 5 hours.