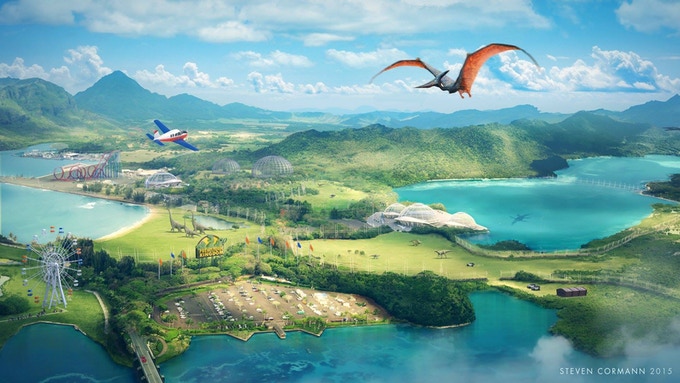 Creating Your Very Own Prehistoric Park

The Dinosaur universe is beginning to make a strong comeback in the gaming industry, with titles like ARK: Survival Evolved and the upcoming Jurassic World Evolution. While these two examples are much more well-known amongst the gaming community, others still wait with anticipation for debuting more dino-taming action, such as the Kickstarter title – Prehistoric Kingdom.

Managing your very own dino zoo is a unique twist on the tycoon style of games, taking the role of the chief manager overseeing your very own park. The game promises to load up on a broad selection of dinosaurs, objects, buildings, decorations and many other customization options, Prehistoric Kingdom looks to be perfect for any dino-enthusiast.

The game centers around players first constructing their own zoo, by molding the terrain, adding in fences and buildings around the layout. Building the zoo is simple, but the key is to maintain a positive level of entertainment and use your managing skills to run the best place to check out the extinct animals we all know and love so well. With deep customizing options and a huge assortment of giant prehistoric animals to populate your zoo with, the developers at Shadow Raven Studios are relentless on creating a tycoon experience on top of an immersive dino experience.

Complete with a Life-like Experience

Flooded with the sights and sounds of scientifically studied dinosaurs, Prehistoric Kingdom will look and feel like a true zoo tycoon based on extinct animals. With tons of creative tools to help advance your zoo building capabilities, the challenging management tasks, like keeping your dinos fed and happy, to preparing for deadly storms that could wipe out the existence of all your hard work. The possibilities of what you can create are near limitless, and is sure to provide plenty of tycoon style challenges.

The customization options found in Prehistoric Kingdom allow players to completely terraform your location, as well as adding a terrain painting feature to help bring the park to life. Of course, the vast collection of dinosaurs to occupy the zoo is the main attraction, but these customizing options, as well as a few other features look to expand to tycoon genre even further.

Hone in on Expert Management Tactics

Building your perfect dinosaur park is only the beginning , as managing the park is another set of obstacles and challenges. When constructing the park players will have to pay attention to the important details that goes into running an animal friendly zoo, such as how easy it is to obtain natural resources, hiring and housing staff, as well as the obvious additions of proper customer amenities, attractions, and keeping the park protected with efficient security measures.

Another proper management strategy is listening to the business’s feedback from guests and customers. Keeping certain facilities running clean and properly, placing profitable and informative advertisements, and catering to the needs of your customers is essential for creating a pleasant and rewarding experience for your dino zoo.

Prehistoric Kingdom is a rewarding dino tycoon style game, but with it comes multiple modes to enjoy the game. Campaign mode will let players build and manage their very own dino park consisting of unique challenges to overcome throughout the lifespan of your park. Research, fossil hunting, terraforming and construction, as well as picking up the pieces after adverse weather conditions put a halt to your progression. Campaign mode is the meat of Prehistoric Kingdom, combining all of the exciting aspects into one.

In Scenario mode, players will be given a unique scenario that may come up when managing your parks. Cutting straight to the action, scenarios can range from wrangling in wild dinos, to keeping your park up to quality operating conditions. The developers are aiming to have a diverse range of scenarios ready to go once Prehistoric Kingdom eventually launches.

In the ultra unique Ranger mode, players take on the role of a park ranger fulfilling their duties. This mode will let players act as wardens and walk through their park and see it truly come to life. Not much else is mentioned on this mode, but looks like a promising and thrilling feature, nonetheless.

A Massive Approach to Creativity

Creating your very own prehistoric zoo and managing it to success is what draws players into the tycoon style dino game, but the many different features brought to life is what plans to keep players engaged. Additions such as modding, map editors and the Steam Workshop will help provide creativity throughout the dino tycoon community. Available now on the Pre-Alpha demo, unofficial mod support has already found its way into the community, now with new objects, like ever-the tempting, playable dinosaurs.

The Map Creator feature allows players to create and share their own maps with the community. Players are able to paint and sculpt to their liking, as well as surf for user-created maps throughout the customizing map editor. Bringing a near endless list of ideas, players have full creative freedom to create a map that’s perfect to their liking.

The Steam Workshop and Exhibit Designer tools will help players create their own dinosaur exhibits, as well as transfer them over to the cloud service from the Steam Workshop. Sharing your saved exhibits and custom designs is easy, and a perfect feature for adding that personal flare to your dino zoo.

Discover Species Other Than dinosaurs, and Even Breed Brand New Species

With the large selection of extinct dinosaur to fill your park with, there is also the chance players can discover and breed brand new species. Through the wonders of scientific research, players will earn Science Points to advance their studies, in turn allowing players to build new structures to unlock new upgrades and technology. Sending out archaeologists, or Dig Teams, and discover new fossils that may lead to the next big discovery.

While the game suggests a healthy dose of dinosaurs to rampage through your parks, there are plenty of other prehistoric animals to populate your zoos as well. Everything from the Brachiosaurus to the Velociraptor, the Tyrannosaurus to the Triceratops, there will be tons of dinosaurs for any hard-core enthusiast. To keep things diverse, plenty of reptiles and mammals will also be at the player’s selection. The winged Pteranodon and the lizard-like giant, Mosasaurs, or the Mammuthus (Woolly Mammoth) to the Smilodon (Sabre Tooth Tiger) are only a few of the other types of extinct species that can litter your wildlife zoo.

In Prehistoric Kingdom, players are given an opportunity to create and discover something many of us only dream about. Managing your very own prehistoric zoo in this tycoon style game is sure to bring plenty of challenges, discoveries and exciting thrills once the Kickstarter pledge comes to a successful end. Now only a few days left at the time of this article, the goal has reached its production goal nearly $20K ago, but that being said there are still plenty bonus incentives and additions that can make the gameplay much more exciting.

Check out Prehistoric Kingdom’s Kickstarter page and find out more on the prehistoric tycoon title, Prehistoric Kingdom. Look over the numerous stretch goals and bonus for becoming pledgers for one of the tycoon genre’s most in-depth titles yet. There’s also a live demo available for the PC on Steam, for those who need a little more convincing.