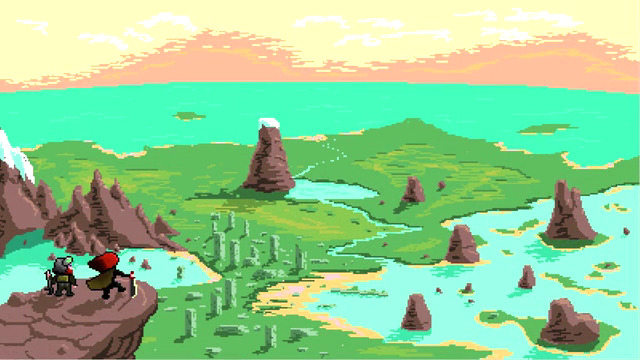 The action metroidvania stylings of the future Kickstarter release – The Seashore – combines the RPG-like pixellated adventure with the co-op based gameplay of old Nintendo classics. The young development team that makes up Boomerang Games is steadily pushing the concept of mandatory co-op play and does so with a beautifully imagined post-apocalyptic setting.

The Seashore takes players into a world where two adventurers embark on a journey to find the answers they’ve been looking for all along. While our two heroes both have their own reasons for traveling to the coveted seashore, neither can make the quest without the help of one another. One chasing the signs of his daughter, while the other searches for her true home, The Seashore is one retro-looking RPG/adventure game with, at the very least, purely riveting back story driven by inventive co-op gameplay.

The Gunman is a military vet with an arsenal of appropriate weaponry at the ready. After receiving a peculiar letter from his daughter, he makes his way through the warring lands in hopes to find her at her destination, ideally the seashore. Using his vast selection of weapons using a style similar to run-n-gun shooters, the Gunman will be accompanied by a strange partner who seems to have a connection to the mystical seashore – the agile swords-woman, Spark. Pursuing the melee style of combat over range, Spark will add thick combos and intense physical damage to the power-duo team.

Between the two characters players will have the option to play as, different skill sets and abilities will help keep each of the two properly separated. The Gunman has a variety of weapons like military firearms, grenades and the unique jet pack to assist in a double jump move. While Spark is much quicker and agile in combat, stronger attacks and has the ability to perform devastating combo attacks. Either range or melee, both characters seems to have their own strengths and weaknesses making for what looks like challenging but exciting combat.

Throughout the fantasy apocalyptic world many new faces and characters will cross your duo’s path. Your relationship with these characters will directly affect the plot and determine the outcome of the story. Hundreds of years into the future and the world around you has changed, discovering secrets and the many characters looks to be all part of the experience in The Seashore. With selective dialogue options and the ability to freely explore the side-scrolling world, The Seashore looks to throw plenty of plot-twisting options at the player.

Being developed for the Nintendo Switch with a big emphasis on user interaction, the co-op driven experience is key in the gameplay. While during combat players mustn’t rely on simple skill and brute force to be victorious, but utilize the ever-present cooperative system to help drive off your enemies. The world is brimming with lively characters and exploration options as players have the chance to venture into the post-apocalyptic world and discover new items, weapons and enemies worth taking out.

Along with the strategic two-player combat scenarios, many other aspects ring-out the call of co-op play. Taking on bosses that require a two-player team to survive specific attacks, saving each other from disastrous events or simply utilizing a character’s unique ability to progress further in the world, two player co-op is at the heart of this RPG adventure title.

With the items available to find and discover are coveted artifacts from the past world. From old messages to pieces of ancient technology, players will use these items to craft special supplies, learn about the destructive world that came before your time, or simply at your leisure of exploration. On top of crafting unique items, players may also craft upgrades for Spark or Gunman’s weaponry, also allowing players to swap upgraded parts to enable constant shifting of customized weaponry to better suit specific battle situations.

The music and graphics are a huge part of the charm found deep within The Seashore. Following the wildly popular 8-bit retro stylized graphics, the dynamic lighting, vast array of pixel colors and fully detailed backgrounds is sure to leave breathtaking moments across the journey of Spark and Gunman. Levels in The Seashore look to take players across a diverse selection of locales, like wintry snow passes, dry and gusty deserts to run-down apocalyptic cityscapes all with their own unique designs. Also, to bring a bit more attitude and life to the beautifully crafted levels is the fitting soundtrack and score to The Seashore. From the minds of W.Clouds, every sound effect and song is recorded specifically to fit in and create the perfect ambiance for The Seashore.

Exploring throughout a 8-bit pixellated side-scroller may seem a bit lacking, but Boomerang Games is hoping to show gamers just how expansive the genre can be. Giving players the option to run about and explore a vividly adventurous map with the help of a friend and fellow companion is something that has been dearly missed since the age of the retro consoles, but luckily for us there’s still creative developers – like the folks at Boomerang Games – to keep us playing together.

Find The Seashore on Kickstarter

The Kickstarter campaign for The Seashore has already achieved its minimal pledge goal for production on PC and the Nintendo Switch, but there’s still some time left to add more content to the game. Giving players new arenas and challenges, hardcore mode, a single player treasure hunt campaign and the challenging option for four-player missions, there’s still plenty the team can do to make The Seashore as enjoyable and unique as possible. While bringing the metroidvania adventure title over to the Switch was the team’s top priority, expanding to the PS4 and Xbox One isn’t out of the question either.

Check out The Seashore at Boomerang Games’ official kickstarer page and consider becoming a backer of this intriguing RPG/adventure title before it’s too late.