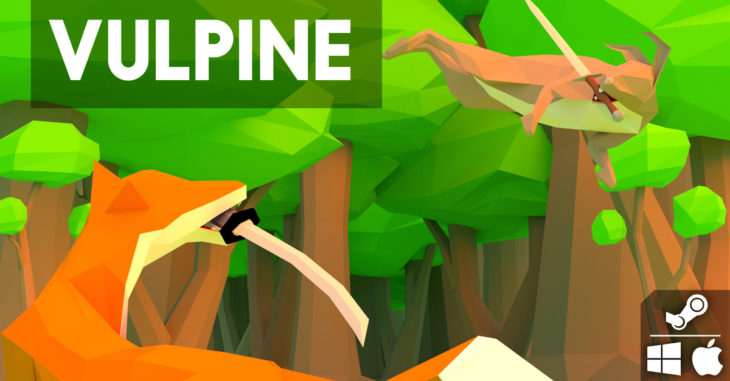 Be a Fox with a Sword!

Vulpine is a polygon styled adventure title that gives players the chance to play the role of one of  their favorite wild animals. Where the catch lies is that these adventurous animal heroes will be skillfully equipped with upgradable weapons to fend off the many dangers that lurk in the wild.

The small indie team – Clockwork Giant Games – is putting together a unique exploration adventure game where players are free to roam a procedural map. By choosing one of the 6+ animals to take control of, players will discover hidden secrets, powerful foes and a world full of so much charm that it’s nearly impossible to ignore. But unlike other exploration based animal games, these indie developers are throwing in the action of a 3D combat experience based around their animal heroes.

The worlds are living and breathing polygon settings, randomly generating themes of dense forests, arid deserts and sprawling plateaus amidst surreal wildlife. Players will embark on their journey after choosing one of the animals to play as, which range from small and agile to mid-size with evenly spread out stats, or the mighty tank-like animals for dealing – as well as receiving massive amounts of damage. The choice lays in the player’s ability in combat situations, which present much of the challenge we may see in Vulpine.

Discover a World of Polygons as a Heroic Wild Animal

The game looks as unique as it sounds, with what looks like a new release from the early millennium era deep in the void of polygon shapes. What seems similar to a clever combination of an early 3D Zelda title and an animal enthusiast’s dream, Vulpine seems to be brimming with shrouded mysteries and villainous monsters. By using the power of determination from the animal kingdom, and the useful weapon held by your heroic animals mouth, player’s sole duty seems to openly explore the multiple maps and areas in search of answers, discoveries or simply slaying off the evil beasts.

So far there are a total of six animals to choose from, but the developing team is gearing up to add more in the future, depending on the success of the Kickstarter campaign. Foxes, or fennecs, wolves, bears, rhinos, the newly added capybara or rabbits all have their own way of taking on combat. Whether light and agile or heavy hitters, players will have their choice between one of the three different types of weapons: swords, spears and hammers.

The weapons are easily equipped by any type of animal you choose, so players will have the option to choose the variation that suits them best. Upon battling through combat players will earn materials which can be used to upgrade your weapons for more damaging attacks. Use your sleek animal instincts and take back the lush wildlife from the dangerous beasts that roam throughout the vibrant landscape.

Fend Off the Deadly Monsters

Speaking of the deadly foes that players will come across in Vulpine, Monsters act as the game’s boss battles, and many are scattered throughout the wild world of Vulpine. These monsters are sure to take a great deal of endurance and aptitude to conquer, but it’s here players will find the most precious materials for crafting. Slaying the many monsters that come in all shapes, sizes and species allows players to strengthen their weapons, making it easier to travel deeper into the world.

The deeper you travel into the world of Vulpine, the deadlier and more savage the monsters are sure to get. Some monster are found or simply stumbled upon in their natural habitat, others may use their animal instincts to track the player down, changing the roles of the hunter and hunted. Each monster is different with their own style of combat, so taking your time and learning your foes every move is vital in overcoming the odds.

The separate biomes featured in Vulpine are all unique and fully alive. With dynamic weather systems, diverse terrains and ecosystems, and appropriate wildlife to suit whichever biome you choose to explore. Players will set off in the biome they choose, and the world is procedurally created to fill up the map with discoveries, enemies and the overwhelming thrill of adventure.

Along with dangerous foes, the world is also promised to be littered with friendly characters and surprise events that occur daily. The world is sure to be full of surprises, like the chance to barter with the friendly cat shop keeper, or receive a visit from any number of unique and friendly characters. Intriguing locations that keep the surprises coming and the player on their toes fill the polygon worlds and hope to keep Vulpine thriving with adventure and memorable moments alike.

The developing team at Clockwork Giant Games are still hard at work bringing Vulpine to the gaming community. While still in the development process, their Kickstarter page is up and running, nearly meeting it’s pledge goal with a solid amount of time left in the campaign. On top of the pledge goal which will allow Vulpine to be fully developed and slated with a release date, there are other enticing stretch goals to add to Vulpine, including creating a more polished game or the chance to port the game over to consoles.

Vulpine let’s players become a fox (or one of the other heroic creatures) equipped with a sword. This unique looking adventure promises to bring out the explorer and animal enthusiast in anyone who picks embarks on the polygon journey. There are plenty of incentives and rewards based on the amount to wish to pledge, so there’s no reason not to if Vulpine is something that peeks your interest in gaming. Check out the Kickstarter page, make a pledge, become a backer and help bring Vulpine out of the wild into the video game community.