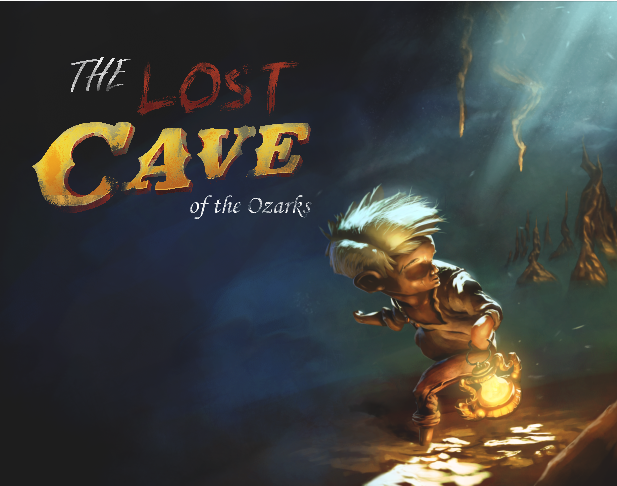 Enter the Depths of an Ancient Mysterious Cave

Exploring the hidden secrets of ancient history is a common occurrence in video games nowadays, with an unforgivable sense of adventure at the peak of nearly every title. Along with historical settings combine that with 2D puzzle/platforming, unique explorations and an intertwining storyline and you get the latest Kickstarter success, The Lost Cave of the Ozarks.

Based off of old narratives from the 1880s, The Lost Cave of the Ozarks will tell a similar tale casting you as the boy who sank into an inexplicable sinkhole. Trapped in a mysterious ancient cave, you begin your escape only aided by your trusty lantern and active imagination. The 2D puzzle/platformer will take players on an adventure spanning decades apart as the further your progress in the story your hero soon takes on another form.

Initially, the game will have players finding their way out of the lost cave solving various puzzles guided through with a platformer mechanic as the young boy. Players eventually shift to a few decades later only now with the our new hero being a tour guide infatuated with the history of the ancient cave. Making your way through the cave a second time is no repetitive walk in the park, as over the years things have changed and players will see the cave in a new light.

Making up the one man team creating The Lost Cave of the Ozarks – Adam Miller – he is looking to create a unique experience fully embracing a strong narrative to immerse players into the game. The music, art, writing, sound effects and programming is all being completed by Miller, making Lost Cave an entirely independent project. The hand-painted visuals and incredibly sobering soundtrack seem to mix exceptionally well with the environment and story driven campaign.

Across the adventurous platformer players will start way back in the 1880s as the imaginative boy. On top of the past adventure as the boy and the decades later vision from the infatuated tour guide, The Lost Cave interweaves a third character into the mix – a hidden dangerous outlaw – which takes place in the same time period as the boy. Seeing this cave of the Ozarks through multiple heroes eyes is sure to provoke an immense amount of depth to the same cave explored time and time again. Aside from the cave and additional time periods, players will use the power of strong imagination to also venture across various settings to help drive the story along further into mystery.

The overactive imagination brought forth by the game’s first hero, the young boy, brings forth the blurred lines of fantasy and reality the deeper he explores the cave. As the boy searches for his way out of the cave – which he accessed by falling through a sinkhole – begins to discover threatening messages left behind from an escaped outlaw who’s now on the run. Messages littered across the cave warn the boy of death if the outlaws whereabouts are discovered, adding more than puzzle solving to the 2D platformer.

After tangling around in the late 1800s as the lost boy followed by the dangerous outlaw, players will then be thrust forward into a more modern rendition of the cave. Decades have passed by since the events of the boy’s fateful collapse into the treacherous cave and now an informative tour guide will lead players through modern era cave system. Digging deeper and deeper into the history of the ancient cave system, players are sure to embark on a journey filled with interesting lore and plenty of memorable moments along the story.

Along with platforming obstacle and puzzles to solve, players will also be able to explore and scavenge the expansive cave in search of various hidden collectibles tucked away, as well as multiple endings and optional story segments to expand well passed the game’s 2-hour completion mark. As immersive and inspirationally crafted as the game looks to be, the diverse platforming challenges, exploration and engrossing story look to tie the game together in a neatly constructed package.

While the cave is easily the anchored setting of the main story, the overwhelming imagination of our lost hero acts as a spark for more exhilarating levels. The Lost Cave of the Ozarks looks to have players first submerge into the sinkhole of the ancient cave, only to be briefly lifted out of the reality of the dark, damp cavern, and lured into dense forests, impressive cathedrals and pirate-riddled seas, just to name a few. The leaps to different the many different outlandish levels look to add a broad sense of depth to the otherwise short campaign.

The further players duck into the cave system, undoubtedly the harder the game will begin to get. The boy will have to use his uncanny wit to solve the many environmental puzzles that will stand in his way of escape. Discovering all of the many threatening messages left behind by the deadly outlaw may also be of use, possibly pointing our young adventurer to his only way out.

The boy’s overactive imagination is a great driving force in creating a truly unique experience across many different settings, but his trusty lantern is an equally important asset. Used as a source of light, yes, but the gleaming lantern also reflects the boy’s health and overall well-being. Upon taking damage, using stamina to sprint or climb the lantern will continuously fade. Once the flame has completely faded away, the boy must start from his last checkpoint. The unique lantern system helps keep the game’s UI unoccupied and free from clutter that often plagues many modern titles today.

Related: Preview: Pinstripe Creator Thomas Brush Returns to Kickstarter for Next Project, Once Upon A Coma

Decades later players will be guided through the modern era cave by the informative Ozark native – Libedon. After the completion of the boy’s journey, and the threatening encounter from the escaped outlaw, Libedon will help fill in the gaps of the cave’s rich history. In each room, the now tourist friendly cave will remark on historical facts about the cave itself, some tales even dating back to Native Americans and Spanish Conquistadors.

Finding the Truth Behind the Lost Cave

Across the three main characters in The Lost Cave of the Ozarks, it will ultimately come down to the player to sift through to the truth. Each character provides their own narrative recollection of the mysterious cave, be it the boy’s restless imagination, the outlaw’s lop-sided encounter or Libedon’s own series of stories and myths. Discovering the truth and all of the secrets that lie hidden-away within the cave will surely bring out the verity of the mysterious cave system.

The Lost Cave of the Ozarks has officially hit its pledge goal on Kickstarter to continue forward with development. The hand-painted design and deeply imaginative intent certainly mark Ozark’s as a real contender as a sleeper hit. For a surreal adventure plunging deep into the depths of, not only an ancient cave, but imagination itself, Adam Miller hopes to cover an insightful and beautifully crafted 2D puzzle/platformer in a rich and eye-opening narrative with – The Lost Cave of the Ozarks.