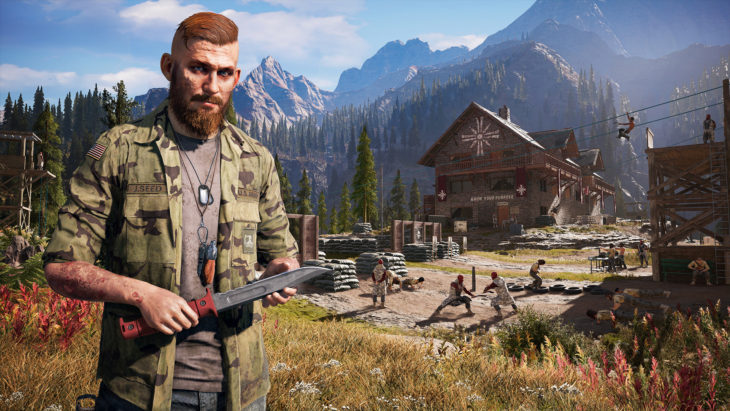 Far Cry 5 is nearly upon us following up its most recent stellar Mesolithic Era entry, Far Cry Primal. Far Cry 5 promises to dish out a lot of new features for the series, like it’s great American frontier setting and first-ever cooperative gameplay.

The Far Cry series has been through a lot over the past almost decade and a half. With a variety of psychologically brutal villains taking place beautifully created settings, be it tropical islands, 80’s action film or slaying cave tribes in the Mesolithic Era, Far Cry is on the move to try its hands at yet another theme. And with Ubisoft Montreal’s latest release now just around the corner, players will yet again dive into an adventure that has yet to be touched by the first-person franchise.

Taking players to the fictional frontier of Hope County, Montana, Far Cry 5 looks to change-up – while has been successful – a rather repetitive gaming concept. Commonly known as the “Ubisoft formula” much of the community grows tired of the seemingly endless routes of reaching and climbing signal towers for info dumps, wiping enemy camps and hunting wild life for rare crafting materials; wash, rinse repeat. With Far Cry 5 things look to get a little more lively.

Aside from new gameplay elements the story and characters stay true to the gripping, often psychologically thrilling theme. Preacher Joseph Seed has risen through the religious ranks and rakes his cult followers over the coals with the promise of salvation through the world’s inevitable collapse. Taking most of Hope County under his wing as the religious right, players will meet a diverse cast of characters opposed to Seed’s manacle views and help take out the grim doomsday cult that follows Eden’s Gate.

The gorgeous scenery displayed in Hope County is truly like no other Far Cry game in the series. The map is absolutely enormous separated into three distinct regions ruled by the leaders directly under Seed. The most unique feature coming to Far Cry 5 is the absence of a completely linear quest line. Rather than in previous entries where players completed the story missions in a particular order, Far Cry 5 allows players to head in whichever direction they choose first.

Related: Preview: Rising Hype, A Successful Beta to a Hopeful Launch – What Can We Expect from Sea of Thieves

Starting off in one region may bring in special forces if triggered by the regions leader. Players can continue down one region’s path as far as they wish, but they will in fact become much harder the further you sink. If players wish to pull out of a region that may seem a bit too advanced for their current skill level, beginning a reign on other areas is a completely acceptable method of honing your skills. Bringing a sense of a bit more flexibility and freedom to the series is sure to help ease some of the dull, tedious moments of constant check list-like gameplay from previous titles in the series.

Pilot the Skies of Montana

Exploring the massive maps in Far Cry has always been one of the most fulfilling and engaging elements to the series. Whether by foot, car, truck, ATV, boat, helicopter or even saber tooth tigers – there hasn’t been much that you haven’t been able to drive, or mount, throughout the Far Cry universe. Even still, Far Cry 5 is adding a bit more to the vehicle driving experience – most notably the addition (finally) of planes.

No longer must players fly high in disappointing helicopter rides, as players will have the chance to pilot a number of different helicopters and planes across the vast frontier of Hope County. In addition to grabbing your pilot’s license, many aerial vehicles come fully stocked with combat weapons for intense aerial dog fights. Or, if you prefer to simply fly over the riveting scenery of gorgeous Montana mountains and plains.

If soaring through the clouds isn’t exactly your cup of tea, sticking to the ground in one of the many land vehicles has been updated, as well. No longer will players be forced to barrel around in one of the local foreign islands dinky compact cars or clunky military trucks, as Hope County is littered with everything from soccer mom mini vans to good ol’ American muscle cars. Along with a wide selection of vehicles, the map is simply exploding with a lively sense of population and traffic; a far difference from previous titles.

As mentioned before the stale repetition of tower hunting and scaling in order to unlock areas of the map, additional side quests and events, as well as other note-worthy locations have been one of the series subtle downfalls. Far Cry 5 looks to change things by completely removing the tower system. Players will no longer become slaves of radio tower hunting as Hope County makes things much more engaging. Areas are discovered by exploration, quests and events will trigger after talking to locals and hunting locations will appear when discovering various marked traffic signs. As just a few examples, everything you can discover comes much more naturally without hindering any engagement from the game by scaling tower after tower.

Fixing Only What Needs to Be Fixed

What hasn’t changed much from the original formula is the idea of building resistance forces against the game’s main antagonist. To go along with the freedom of picking and choosing your storied direction, players will also unlock main quests by liberating regions in whichever order they choose. Of course, liberating locals isn’t the only to help force out the doomsday cult, as many missions and events to disrupt the cultists will be just as readily available as helping out the citizens.

The Far Cry series is known for casting insane, colorful and ill-tempered villains that often leave players wanting more from the deranged leaders. While Far Cry 5 is no different with Joseph Seed looking like one of the best we’ve seen yet, the protagonist characters have more often been forgettable. For the first time in the series, players will no longer be anchored down by a specific storied character, but rather able to create and customize their own hero to play the role.

Related: A Preview of Ni no Kuni II: Revenant Kingdom

Creating your very own liberating protagonist is a great way to help the series edge itself a bit further into the RPG hole, but is also useful for the online co-op feature. Players will finally have the option to play with a friend across the vibrant and serene map of Hope County. The entire campaign will be available to play in 2-person co-op, adding much-needed co-op play to the vastly entertaining open-world shooter.

Hope County, Montana looks to be filled with a litany of exciting quests, events, locals, mad cult groups, vehicular transport, thrilling arsenal of weapons all tied into the chaotic, mayhem induced Far Cry package. Far Cry 5 breaks a few barriers with online co-op, open-ended progression system, new event system which includes the relaxation of fishing, new exotic vehicles and an enthralling yet disturbing opposing force following Project Eden’s Gate. The setting is like no other we’ve seen throughout the series, and what comes with it just may be enough to revive the series from its inevitable stale path.