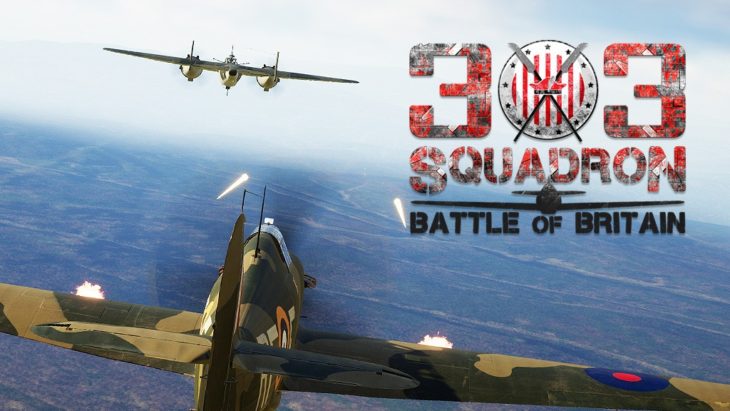 Relive the Days of a WWII Aerial Combat Expert

The heroic days of the World War II era have been around in the video game culture for as long as the shooter genre has been around. While flight simulators often take players through common war eras like WWII, there are still developers pushing the bar for more story driven aerial combat titles displaying the real heroes of that time. 303 Squadron: Battle of Britain looks to do exactly that, thanks to the indie game studio, Atomic Jelly.

Firing up the skies, players will take on the aerial combat maneuvers from the famous 303 Squadron from World War II. This exhilarating looking flight sim title will give players a unique chance to take on dogfights in the sky in realistic events from the war. Soar through the air and take out enemy forces using your honed pilot skills.

Just a few days into the Kickstarter campaign, 303 Squadron is now rounding out their initial total with flying colors. But that won’t stop the team from going further, with additional funds going towards making the game more immersive, as well as bring the title over to other gaming consoles. With just under a month to go, the team still has plenty of time to, not only meet their required goal, but surpass it by a long shot, in hopes to add more content to their project.

Buffs on history and aerial flight games will absolutely love the 303 Squadron experience, and if you check on over at the Kickstarter page now, players can jump on into an early demo of the game if they become a backer. Get a head start on what to expect from 303 Squadron, and experience some historically accurate events that took place in the historical RAF Northolt Airbase.

Throughout the story line, players will experience a passionate and deep narrative dedicated to providing every mission and character to be based on actual events of the war. Developers have taken instances from the “day-to-day” almanac of witness’ stories form WWII. These real stories and historically factual events will definitely provide a sense of satisfaction for almost any history buff playing through the game.

Along with taking out enemies in heated aerial dogfights, players will also have the ability to explore the RAF Northolt Airbase, as well as play mechanic to increase the performance of the 303 Squadron’s fighter planes. This isn’t just some aerial combat title, but an all out flight sim giving players the complete flexibility to enhance and repair their own fighter plane.

Utilizing the unique Mechanic mode, players will enter the aircraft hangar in first person mode, and become the top mechanic for the fighter pilot team of 303 Squadron. Designing and equipping the aesthetics, performance parts, combat arsenal and other key features to your aerial fighter, players will be able to add some personal flare to their custom flyer. Aside from adding new parts, airplane calibration and ever-important maintenance will also be available for the player to experiment with.

As you explore the garage in Mechanic mode, players will also be able to traverse the historical RAF Northolt Airbase. Players will find new missions, side missions and meet real-life characters from the WWII era. Everything is based on fact in this heroic aerial combat title, adding a great deal of history to those not familiar with the stories from the historical era. The entire environment of the RAF Base is interactive, and has its own life source of realism to further immerse the player in the WWII time.

While this particular WWII flight combat sim looks rather impressive, as well as exciting for any aerial enthusiasts, the pledge goal is set relatively low compared to other indie titles on Kickstarter. That’s not to dissuade future backers from donating their hard-earned dollars to 303 Squadron, but simply take a look at of the stretch goals available, which could help make 303 Squadron even more enticing.

Making the Game Even Better with Stretch Goals

Increased camera modes, new character cards, improved aircraft maintenance, more side quests, time challenges, Xbox One and PS4 ports, and even a goal to make the title VR compatible all wait ahead of the initial pledge goal. While some of these stretch goals are a ways off, there’s still plenty of time to get the most out of Atomic Jelly’s aerial sim. Ranging from $16K all the way up to $300K for VR support, there is loads more room to allow 303 Squadron to provide one of the best WWII flight sims around.

Across the historical wings of WWII, 303 Squadron: Battle of Britain has easily surpassed it’s relatively small goal. Once the campaign has been successfully finished, the developers over at Atomic Jelly will be hard at work to bring what hopes to be their second big release. They have seen tremendous success with the demo to their upcoming release of Lust for Darkness, and now they’re growing ever confident in their ability as a team to develop fun and worthwhile games.

303 Squadron: Battle of Britain has surpassed it initial Kickstarter goal, so head on over to the developer’s Kickstarter page and consider making a pledge to help bring more “umph” to the title. There are loads of rewards for backers of Atomic Jelly’s project, so the effort is well-worth the cost of helping bring this game to life.

303 Squadron: Battle of Britain will be expected to release for the PC on Steam, unless of course the pledge goal to port the title over to Xbox/PS4 has also been met. Be sure to head on over to the official Kickstarter page and back the campaign for a copy of the 303 Squadron demo.