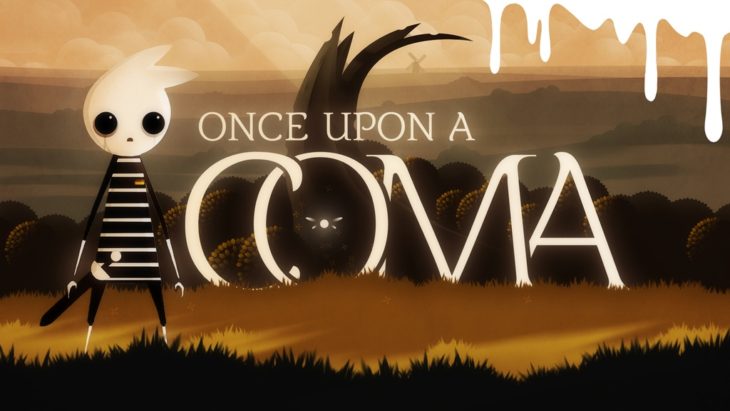 From the creative direction of the acclaimed indie title – Pinstripe – Thomas Brush has returned to Kickstarter for help on his next evocatively surreal and emotionally deep project, Once Upon A Coma. While the pledge has ultimately surpassed its initial goal by a mile, Brush is still pushing for a couple more stretch goals to round out the game’s release.

Once Upon A Coma will take players through a whimsical journey through an unusual reality after waking from a mysterious coma. Upon further inspection, the reality in which Pete – our hero in Coma – discovers isn’t exactly what he remembers before his time spent unconscious. The world is alive with pesky children and stripped clean of adults, but what seems like a child’s dream set in a late-summer ambiance quickly turns into a dangerous adventure through hostile forts, intricate puzzles, horrific zombie-parents and plenty of other threats that lurk throughout your journey.

The side scrolling platformer paints an image of a group of friends embarking on a mysterious adventure to find your missing sister. Equipped with your father’s old shaving razor, you’ll explore and discover the strange and peculiar world around you brimming with unique puzzles and bizarre dangers. But the many surreal environments and odd surroundings are only part of the outlandish atmosphere brought forth in Once Upon A Coma. Scattered throughout the world are musical pieces written by your sister, and Pete must find and play these bits of song on his old piano in order to unlock hidden paths, clues and interesting new abilities.

Across the journey players face off against vile insect enemies with the help of your childhood friends. Making your way through imaginative forts and completing make-believe side-quests just as any child would with their close pals, but things begin to come alive in the imaginary world of Once Upon A Coma. The piano heavy soundtrack is sure to glide players along the uncanny world around you as your adventures takes off.

A Surreal Journey Full of Song, Friends and Charm

The songs featured throughout your adventures are the very songs written by Pete’s sister, i.e. the same songs you’re searching for. Learning to recreate the inspiring musical pieces composed by your missing sibling looks to play a huge role in the challenges, as well as the theme in Once Upon A Coma. In reality, the Debussy-inspired piano tunes were written and performed by none other than the creator, Thomas Brush, himself. The songs are truly a haunting experience that paints a beautifully somber image of the mysteries that lie ahead in Coma.

Across your adventures players will come across six striking levels from mountains and forests, to underwater worlds and vast fields. Starting from your home-town, Pete will discover a world full of breathtaking song set to a beautifully hand-drawn world. Populating these often bizarre levels are the stranger insects and other weird bosses that stand in your way. Using the edge of your razor, the quick hack ‘n’ slash combat looks to compliment hand-drawn platformer graciously.

Once Upon A Coma looks like a serious and gratifying experience for all gamers alike. The resiliently moody soundtrack meshes perfectly with the stellar visuals, but the dialogue looks to keep things from getting too serious. Often through the selective dialogue options Pete, and his trusty friends, will engage in conversation trees composed of hilarious and light dialogue. Adding a sense of comic relief in a world that is shaped by the imagination of childhood can only create a truly memorable experience.

From the Creative Mind Behind ‘Pinstripe’

The veteran game developer Thomas Brush has had his ups and downs while working in the industry he so passionately works in. With Once Upon A Coma being his most ambitious title yet, there’s something to be said about the emotional journey it takes to develop games that strike a chord with their creator, and Coma seems to be exactly that. While the Kickstarter campaign has officially crushed its initial goal, bringing Once Upon A Coma over to other consoles outside of PC, like Nintendo’s hybrid console the Switch, as well as adding new features to the game is still very much in reach.

Head on over to Once Upon A Coma’s Kickstarter page while there’s still some time left and consider joining in on helping create what very well could be another classic from Thomas Brush. While Pinstripe garnered superb reviews and acclaim, Brush is confidant in creating something even better than his last title. Once Upon A Coma is only around halfway complete at the time of this writing, and Brush needs help from loyal pledgers to push the game into the second half of development.

Check back for a possible beta testing of Once Upon A Coma coming this July 2018, and keep those fingers crossed for the official release date coming this Fall 2018.