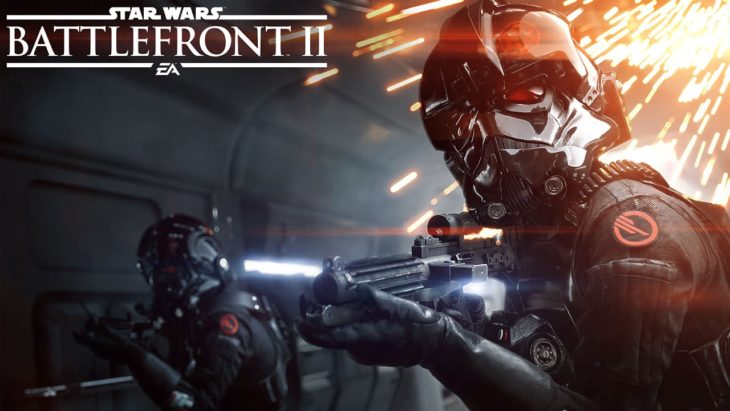 -Get your Lightsabers ready-

The next installment of the Star Wars Battlefront series is gearing up to hit stores next week, bringing with it tons of lightsaber swinging, TIE Fighter maneuvering action. With both massive online play and deep single player modes, Star Wars Battlefront II is sure to hit the ground running as one of the top sellers this holiday season.

The original Star Wars Battlefront released all the way back in 2004 and made it big with high praise due to combative gampelay, intuitive core mechanics and addictive single player action. Warranting a sequel, Battlefront II released the next year in 2005, garnishing even higher scores than is predecessor for enhanced gameplay mechanics and the addition of a single player campaign mode.

While the original Battlefront series stood proud and tall on their own over a decade ago, EA Dice took the chance of rebooting the series with the all-new Frostbite 3 engine. Released as a sole multiplayer experience in 2015, many single player fans felt a little cheated compared to what the original series offered. Still, the game was received with above average reviews for its highly polished visuals and competitive online action.

Now, almost exactly two years later, EA Dice – with the help of Criterion Games and Motive Studios – is back at it again with the reboot of the sequel – Star Wars Battlefront II. Returning with more intense Star Wars battles in both the skies and on land, outside of the vast world of multiplayer action sits the long-awaited arrival of the single player campaign mode that was so dearly missed from its precursor. Along with more in-depth online player development and loads of customization options, Battlefront II is looking like it’s ready to take the series to the level it so respectfully deserves.

-Covering all eras from the Star Wars saga-

Adding features based on The Force Awakens and Last Jedi Star Wars series, Battlefront II is looking to extend the amount of playable content to the series by adding a compelling Story Mode, as well as build upon enormous online multiplayer matches. Using the first/third person options found in all of the other releases, Battlefront II will let fans play as either heroes or villains featured throughout the long history of the coveted franchise.

The epic campaign mode will take place near the beginning of Return of the Jedi timeline and run up to around 30 years leading to The Force Awakens era. Taking control of Iden Versio, you’ll lead the Inferno Squad on a mission to finally rid the galaxy of the Rebellion. In a death-defying mission known as the Battle of Endor, you, and the Imperial Special Forces unit, Inferno Squad, will square off against a Rebellion group strengthening their forces at the volcanic planet, Sullust.

-Lead the Inferno Squad and conquer the Rebel forces-

As Iden, you’ll spend time completing important missions for the Empire, crossing galactic space and putting your natural skills and combat abilities to good use. After the destruction of the second Death Star above Endor, Inferno Squad forms as a specialized unit to go wherever they might be needed help aid the galactic community. When the Empire seems at its bleakest, Iden Versio, daughter of Admiral Garrick Versio, will team up with Gideon Hask and Del Meeko, and put everything on the line for the future of the Empire.

While taking a breather from saving the Empire from Rebel forces, the multiplayer mode takes up a huge portion of Battlefront II’s content. Featuring five different competitive modes, players will find a list of deathmatches, team deathmatches and capture the flag type battles, all of which are spread across up to a dozen different planets. Ranging from 8 player battles all the way up to 40, Star Wars fans from both the light and dark side will be able to play as their favorite characters from all over the timeline of the franchise.

-Up to 5 different multiplayer modes-

The largest of the five is Galactic Assault, which pits two teams of 20 against each other, completing various objectives and conquering over the enemy forces. With the game offering a variety of different types of vehicles either land or air, a handful of trooper classes to choose from and the ability to call in AI reinforcements, this team-based war is sure to be one of the game’s most acclaimed multiplayer modes.

Other online teams battles consist of Starfighter Assault, which is a 12-on-12 space battle between a variety of different ships and fighters. To amp the magnitude of the battle, 20 additional AI ships will be added to the mix, really amping up the intensity of the combat. Complete multiple objectives to win the match which takes place across several different stages across the galaxy.

Strike and Blast modes are smaller sized battles featuring close-quarter combat and numerous objectives. Strike takes two teams of eight and spawns various challenges and missions throughout the match, while Blast provides a fast, in-your-face style of close-quarter combat. Strike take son the role similar to Capture the Flag modes in other online games, while Blast is similar to solo deathmatch.

Finally, the last mode featured in Battlefront II’s multiplayer is the Heroes vs. Villains challenge. Two teams of four made up of light sided characters on one end, and dark sided characters on the other, they do what they do best and brawl it out until the end. Beloved (and hated) characters from all over the Star Wars saga will finally face off in epic four on four multiplayer action.

The player customization options in Battlefront II is another change in the rebooted series. Instead of one basic soldier to even the playing fields, such in the case of the 2015 prequel – Battlefront, players are now able to choose between four different trooper classes. Along with the four classes having the option for customized abilities and skills, the heroes and ships are also customizable in similar ways. Using precious Star Cards, the perks add to additional abilities for each of the four classes. Building on the basic 3 abilities for a more powerful and threatening soldier will provide players with more than just cosmetic rewards this time around.

Character customization plays a huge role in Battlefront II, adding new and additional abilities to the soldier’s skill set. Also added is the variety of soldier classes, including assault troopers, heavy troopers, the specialists and the officers. While the trooper classes offer a more generic soldier style approach, both present unique combat styles, such as the heavy is loaded with the massive autolaser, while the assault trooper moves at a quicker pace. The specialist serves as the games sniper position, using long-range weapons with precise scopes. The healing players will likely use the officers, keeping your allies in peak fighting condition throughout the match.

Aside from the riveting single player campaign, and the vast amount of content featured in the multiplayer matches, Arcade mode provides players with a chance to hone their skills, complete random scenarios or partake in local split screen combat. Taking on AI enemies in a variety of challenges, solo or two player arcade sessions aim to increase the skills and abilities for players, or simply have some couch co-op fun in the epic Star Wars universe.

Star Wars Battlefront II looks to be building on everything the entire series has done right. With a welcomed story mode, rewarding character customization options and unique and tactful soldier classes to keep the battles surprising and competitive, EA Dice is expanding the series beyond expectations with accessible and addictive gameplay. Bringing more galactic combat with an increased focus on a true shooter experience (Did someone say iron sights?), a long list of challenging and adrenaline inducing online and offline modes, perform land, space and close quarter combat maneuvers, all in either first or third person perspectives, Star Wars Battlefront II already sits high on the ‘Most Anticipated’ list of 2017.