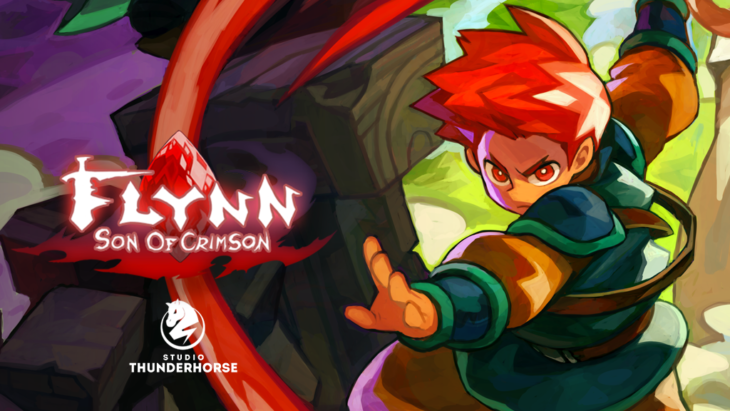 After a successful run of the Kickstarter page, Studio Thunderhorse is gearing up to deliver their newest upcoming release – Flynn: Son of Crimson. Venturing into the 2D platforming genre, this gorgeous looking adventure title looks to bring elements from all across the gaming territory of the action/platformer category.

Placed into a world where darkness is beginning to take over, an orphaned boy named by the name of Flynn sets off to return the world to its peaceful self. While journeying through the vast, non-linear world, you’ll soon awaken your Crimson abilities that dwell deep inside of Flynn. Summoned by the ancient powers, fight the leering darkness and use your powerful Crimson skills to conquer your enemies.

The Once Peaceful Lands of Rosantica

The lands of Rosantica is torn in two after decades of constant war between battling parallel worlds. The world of Humanity and the world of the Gods duked it out for decades, and soon the Great Conflict came to an end. But in the aftermath, Lord Zealock becomes enraged with the Goddess of Sorrell and began causing what looks to be inevitable destruction to Rosantica. Summoned by Sorrell herself, Flynn will traverse the war-ravaged lands and put an end to the destruction and looming darkness causes by Lord Zealock.

Rosantica is full of discoveries and surprises, as well as a ton of other areas to discover and explore. Using the resourceful and obedient four-legged animal, Dex, Flynn can mount and traverse the lands upon his back. Whether on foot or the back of Dex, the lands of Rosantica look to provide diverse and unique settings in this fantasy adventure title.

Whether peering into the evil and hatred consumed area known as The Scourge, or one of the many different settings found in Rosantica, Flynn has embarked on an adventure of a lifetime. The Hollow, Mistral Peak, Rustwood, Santica and the yet-to-be revealed setting, Shivering Spire all look to bring diversity and variety to the upcoming release. Traverse the alcoves and damp caves of The Hollows, the frigid tundra of Mistral Peak or settle-up and relax at the soothing and friendly stronghold of Santica, full of villagers with miscellaneous quests, traders to barter with for Crimson upgrades, and of course, Flynn’s many allies who help Rosantica fight against evil. Flynn: Son of Crimson looks to bring tons of gameplay to the 2D action adventure genre.

Traversing through the 2D battle field will prove difficult as Flynn progresses. Exploring the ancient lands, you’ll come across many ways to increase Flynn’s power, as well as learn new skills by discovering relics of ancient Rosantica, monuments to the goddess Sorrell and scattered effigies. These will all help unveil the beginning story of Flynn, in turn revealing new abilities to learn.

The world brings a different approach from other traditional 2D platformers. With a non-linear approach, the player is free to do as they please, exploring branching secret pathways, get into hairy combat with monsters, earn precious loot through trading with villagers, or simply relax and take it easy with friendly dogs found in the game. An exciting new approach to provide more playability in the simple, yet amusing platforming genre.

Throughout your adventures, Flynn will train, fight, trade, explore and even travel through other dimensions to stop the looming threat of darkness. The game looks to be full of deep dialogue, fluid and satisfying combat mechanics to master, tons of new techniques and skills to learn, as well as plenty of other challenges outside of the story, like the infamous Rustwood Coliseum. A full and deep 2D adventure awaits, and now – with the help of over 1500 backers of Kickstarter – the gaming community has a chance to get their eager paws in this outstanding looking indie title.

The game makes note of certain “juicy” aspect found in the best gaming experiences, and manages to pull them all together in Flynn: Son of Crimson. With every combat move, every punch or kick the player will ‘feel’ the engagement, leaving an all-too satisfying feel to the game. Every move, ability or skill is sure to pack a punch every time you land on an enemy, leaving an uncanny desire to continuously fight your way through the game.

Flynn has the unique ability to swap weapons at the push of a button. Designed for fast-paced action, the player can easily accomplish set combos, player-made combos and switch between powerful weapons in an instant. The weapon held closest to Flynn, The Crimson Blade, was gifted by the Goddess Sorrell. As the default starting weapon, many more skills and abilities can be acquired by trading gems that Flynn finds along the way. Many unique combos and special moves can be traded for trinkets and oddities, leaving an almost endless list of move sets and skills.

Other Crimson weapons will be worth trying out as well, such as the Crimson Axe, Crimson Claws and of course the Crimson Bow. The Axe reserves the role of the heavy brute style weapon, demanding precise timing and excellent defensive tactics. The Claws are equipped as a double weapon, dealing quick combos and animal-like abilities. For a ranged attack , the Bow gives the player exactly that. Not only will you be able to take down threats for afar, but release traps and puzzles using the ranged combat method.

The Development Process of Flynn: Son of Crimson

Over two years the team behind Flynn has been hard at work trying to bring this title to life. With tons of features to offer the 2D action, Metroid-vania style gameplay, Studio Thunderhorse is now moving to the next phase of game development. Reaching their overall Kickstarter goal, the team can now make the final push into making this game become reality.

While the pledge goal has been met, there are still tons of other additions the team can put together for Son of Crimson. By raising over $50K the team will port the game over to Xbox and Playstation (possibly the Switch) current gen consoles. This would be monumental in bringing this incredible looking title to the hands of even more gamers. Additionally, up to $90K can be reached for the ultimate content boost, by adding a DLC story with a new character – Rozia -, a Challenge mode and a sleek new animated intro. With 10 more days to go, the team still needs a good amount of pledges to help bring them to the $50K mark.

Studio Thunderhorse is still hard at work bringing this outstanding action title to PC. Flynn: Son of Crimson is still live on the Kickstarter page, and while the pledge goal has been reached, the team could use more help achieving harder-to-reach funds for additional content, which would turn the title into an even more exciting release.

For all of the 2D, beat em’ up, fast-paced action game fans out there, Flynn: Son of Crimson looks to be an excellent addition to the genre. Fight against the closing darkness and rid the world of Rosantica of darkness and monsters. Using the powerful and coveted Crimson weapons, Flynn will bring back peace to the once cherished lands. Check out the Kickstarter page now and see what it takes to get this title off to a quick start in the flooding market of 2D indie releases.